Sometimes a story arises which is so indicative of our culture and so important in its implications that it deserves an immediate response.  The Daily Telegraph, the Yorkshire Post and the Daily Mirror all carried this story about Rev. Peter Hughes.    Peter quoted extensively (as did The Mirror)  from my article Parents Take Back Control – The April Record Editorial which he read on this blog.   The reporting tells its own story.   This is what we learn.

I have encouraged others to speak out about the evil that is happening in our culture. But there is a price for doing so.  It’s easier to keep silent or to go along with it.  Especially if you belong to the Establishment and its institutions, and your job, status and identity rely on it, then most would give in and hold their tongue.  But someone has to speak out.  Peter did – and now he is ‘under investigation’ as though he had committed some crime. Note that he wrote his views in his own parish magazine – not in a newspaper, or a poster, but in his own publication.  And yet the thought crime police were on to him in an instant.  Another pastor told me of a University Students Union who wanted him to undergo an assessment before he was allowed to speak to the CU because he had linked to two of my posts on his FB page!  This is modern Britain – where citing The Wee Flea causes you to come under investigation!

2.  The Media are often ignorant and prejudiced

“a furious vicar” published “a three-page rant”.   The language is just pejorative and a 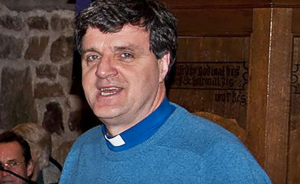 lie,  Peter Hughes was not ‘furious’ and his letter was not a rant.  It was a detailed consideration of some of the issues involved.  How do I know that?  Because it was basically a citation of my own article.  If the Mirror’s investigative journalist had managed to do some investigative journalism and actually read what he was commenting on, then he would have been able to report more accurately.   Of course, the reporter was not interested in accuracy, or in the truth of what he was saying.  (Note also the photo used – the photographer is given a remit to get a somewhat unflattering photo – making him look slightly eccentric or odd – and duly obliges).   Ironically the journalists report reads like more of a rant than the vicar’s considered comment.    But most of our media (including sadly much of the so-called ‘quality’ press) delight in sharing their ‘shock, horror, how dare they say that’ opinions, rather than reporting factually.

3.  The Church is pathetically compliant

So what does the ‘Director of Education’ of the Sheffield Diocese think of teaching children that there are 77 genders and that children can choose and change gender?  What does he think about teaching children Queer Theory?  What are the views of the Diocese?  Do they at all reflect the views of the Bible they are supposed to be teaching?  Or are they just a reflection of the current liberal/progressive zeitgeist?  As he throws his own vicar to the mob, perhaps Huw Thomas should consider his own use of language?  Speak the truth in love – as someone once said.

4.  The Political Establishment follow the mob rather than represent the people

Paul Scriven, a Liberal Democrat peer and former leader of Sheffield Council, stormed: “He’s a fool, I think he knows nothing about what’s going on.”He doesn’t have the right to use these opinions to stop young people being taught to understand the world they inherit. “He is quite right to have his personal opinions; I think they’re wrong and outdated.”

Notice how the unelected peer in his smug superiority just assumes that only his position is right.  In effect, he is saying “He can have his personal opinions but I will argue against them, not by dealing with the arguments or explaining my own position.  No, I will call him a fool, ignorant, wrong and outdated.”  What a fine example to set to the social media mob!  Is Lord Scriven aware of what he is talking about?  Does he know about the harm and abuse being done to children through the Trans ideology?  Or the attack on women and women’s rights?  Does he actually know what is going on?    Does he think that teaching children Queer Theory and the unscientific ideology that biology and gender are unrelated ‘understanding the world they inherit’.  What the bad Lord doesn’t grasp is that it is precisely because  Peter Hughes and myself want to help children understand the world they inherit, that we want to teach them the truth about biology, gender, humanity and identity.  Not the wacko and abusive theories of the fanatical trans ideologists.   Unlike most of the people who are making these decisions (often in ignorance) we and our people have to bear the consequences of them.

5) The Educational Establishment are more concerned about social engineering than they are about education.

The school and its trust jointly said in a joint statement yesterday, Mr Hughes was entitled to his views, which they did not share. “There is a due process if we feel any governor has brought the school or academy into disrepute,” a statement said.”That process has begun, which does of course include a full investigation before a decision is made.”

Again notice the doublespeak.  He is entitled to his views – but if he dares to express them then ‘due process will begin”.  In other words – forget what is right and wrong – toe the line as regards our ‘values’ or you are out.  It doesn’t matter that those ‘values’ have no foundation in reality, can be changed at a whim by the elites, and are unrelated to education – they are the absolute.  To disagree with them is blasphemous – and you will suffer the consequences.   What will the ‘full investigation’ be into?  Will they actually dispute the truth of anything he said?  Will they investigate their own views and their adoption of a harmful policy?  Or is this investigation more akin to a secular Spanish inquisition?  You have dared to challenge our doctrine, now you must recant or be punished!

If the good vicar is to be thrown to the mob by his own church, his own school and the political and media establishments – I stand with him.  As will many others.  Not just Christians and Muslims, but many other parents who are fed up of their children being sacrificed to the whims of a progressive establishment who don’t give a fig for the poor and the weak – and seem concerned only with protecting their own position.

I told a Scottish government minister that if they put me up in front of any group of Scottish parents and debated this subject – they would lose every time.  Not because I am brilliant but because parents generally have more sense than that political establishment.  That minister’s response was chilling:  “Yes – but parents are ignorant”.  This is the attitude that the political and media establishments have towards us.  Yes, there are politicians, educators, judges and even clergy who will speak out for common sense, rationality and humanity – but they are the exceptions.  The vast majority go along with an establishment which has been hijacked by an authoritarian ideology that seems to drive them insane….So insane that actually making these statements below is a crime!

A man cannot become a woman or vice versa.

Babies are not assigned a gender at birth- they are born male or female.

Telling depressed children that they may be that way because they are ‘trapped in the wrong body’ and encouraging them to have that body mutilated is ‘state sponsored child abuse’.

Teaching children the wrong view of relationships is harmful and can be a form of ‘sexual grooming’.

There are people who suffer from Gender Identity Disorder.  They need support and help.  They do not need condemnation or abuse.  Nor do they need to have their disorder affirmed as order.  They don’t need their bodies to be changed to suit their minds – but rather the other way round.

Simply abusing those who assert these views, rather than having an intelligent and informed discussion is not helpful.   As someone who has faced the Twitter mob when you dare to blaspheme the new authoritarian State doctrines – I can only empathise with my Anglican brother, praise him for his courageous stand…and stand with him.

Brother – you will win.  Not because you have political power – but because you belong to the One before whom, one day, every politician will bow – and give account for what they have done with their power. 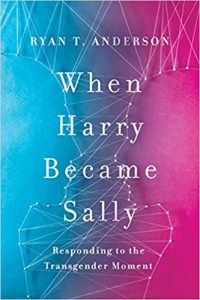 Here is a simple challenge – to the Rev Thomas, education spokesperson of the Diocese;  Lord Scriven, the illiberal Liberal politician; Mark, the Mirror journalist;  Rev. Hughes’s school; and the Scottish Government Minister (you know who you are!) – read the material below and then debate/discuss with me about it.  If I am wrong you can correct me…if I am right you must correct yourselves!

Shake on It -Engaging with Transgender People

Thrown to the Wolves – What happens when you dare to question the Trans agenda.