The BBC have produced and broadcast a video which stuns me!  It’s fair, balanced and interesting.      In September last year I went through to Glasgow to record a programme, Shake On It for the new BBC Scotland station.   I wrote about the experience here –

Yesterday the BBC broadcast the show.  You will understand my being apprehensive about what would happen when you realise that we recorded for two and a half hours. This was then distilled to 5 minutes.  Talk about being a hostage to fortune or prejudice!  But I think the producers, Firecrest Films,  have done a superb job of editing.  They certainly have given a fair representation of the whole conversation.  See for yourself.

One interesting footnote – in the BBC video that went viral and made Victor famous, she stated she was binary….at the time of the interview there had been a significant change.  Now Victor says he is male.   It’s interesting how someone who states gender is fixed then changes. 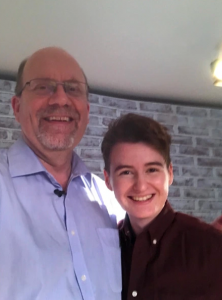 When you set the story in the midst of a bigger picture – The Big Story what a difference that makes. I very much enjoyed meeting Victor and I hope we will meet again to continue the conversation. Victor is a human being, made in the image of God. I encouraged him to look beyond gender for his happiness and fulfillment. I pray for him…

I have no idea how the programme will turn out…but I do know that this was a worthwhile interaction and will I hope be beneficial to Victor and to all those involved and all who watch. We will see if the Trans Thought Police even let it happen!

Another excellent programme in the series is the one on religion with Stuart Patterson, who superbly answers Gordon the Humanist…watch it here –    Well done Stuart!  That programme deserves to be shown far and wide.