This is an easy to read, and well-written book – much better stylistically than the earlier work. As always with Chalke the book will be described as ‘controversial’ and will delight some (like Rob Bell and Brian McLaren) and appal others. From a personal perspective, I found that The Lost Message of Paul contained some interesting information, provocative arguments, challenging questions and old heresies.

Steve argues that ‘all the old narratives are dead’ and that we need a ‘new story’. He blames Augustine, Luther and Calvin for getting Paul’s message wrong. But his new story suffers from some major defects.

Amongst the other earth-shattering revelations, we are informed that Paul was not a Christian – “it is a mistake to regard Paul as a Christian. Paul wasn’t a Christian. He was a Jew”. This is sadly all too typical of the style that Chalke employs – make a shocking statement based on a false dichotomy and there are some who will say ‘wow’!

But others who know their Bibles will recognise that this particular theological emperor has no clothes. King Agrippa assumed that Paul was a Christian and that he was trying to make him one (Acts 26:28).

Chalke’s error is to forget that you can be both a Jew and a Christian (as most of the very early Christians were). Indeed you could argue that Paul was amongst the very first to be called a Christian. “And when he found him, he brought him to Antioch. So for a whole year Barnabas and Saul met with the church and taught great numbers of people. The disciples were called Christians first at Antioch.” (Acts 11:26)

If the biblical understanding is all over the place, the historical is even worse. For example, Chalke tells us that the cross only began to appear as a symbol of Christianity in the 5th Century. But we have clear evidence of the cross being used as a symbol of Christianity from the 2nd Century. The Octavius of Minucius Felix, Clement of Alexandria, Tertullian all mention the cross as a Christian symbol – long before the 5th Century.

If you want to know what Luther, Calvin and Augustine thought and taught – don’t read this book!

As for the theological – it all depends on who you are listening to. According to Chalke “everyone agrees” that the Lutheran perspective on Paul, Judaism, faith and works was fundamentally misleading. Luther was mistaken to argue for justification by faith alone. Everyone? John Piper? Sinclair Ferguson? Philip Jenson? John Stott? Amy Orr-Ewing? Billy Graham? Al Mohler? Everyone?!

The arrogance is breathtaking. Luther, Calvin, Augustine, the Creeds and most of the Church did not understand faith, the cross or judgement – even Tom Wright gets it wrong. But never fear, Steve Chalke has now discovered it. This is, to say the least, a bold claim!

The arrogance doesn’t stop with historical figures though. Steve knows better than Jesus, Paul, David, John and the other authors of the Bible – they were apparently unaware that God is not to be referred to with a gender-specific pronoun. In fact, one wonders how Steve even knows what Paul thinks, or what he did, because Steve is not sure that Paul actually wrote many of the letters attributed to him.

This uncertainty results in a pick ‘n’ mix theology throughout the book – the Bible is not the infallible word of God, God cannot be wrath and love; there is no original sin; Adam and Eve is a myth; the atonement is “a pre-Christian pagan idea”; Hell has no place in Paul’s message. The Lost Message of Paul – seems a mirror image of The Lost Message of Jesus.

Tim Keller has a wise word for those of us who engage in dialogue and discussion. When we are arguing against something, we should always deal with the best of their case – not the worst. It’s a standard ‘worldly’ trick to set up strawmen which are easy to demolish. The Lost Message of Paul is populated with enough such strawmen to fill a field.

One example is Chalke’s mischaracterisation of those who hold to justification by faith. He describes our definition of faith as being “the ability to hold to a particular set of intellectual positions”. Not one of the people Chalke demonises holds to that position. Nor do they hold to the view that faith is in a set of concepts as Chalke claims. Biblical faith is in a person – Jesus Christ.

This setting up of strawmen is the greatest weakness of the book – “faith from an old Protestant point of view, becomes something that you are either born with – good news for you – or not – bad for you”. I have read many ‘old Protestants’ and have yet to come across one who thinks that faith is something you are born with. 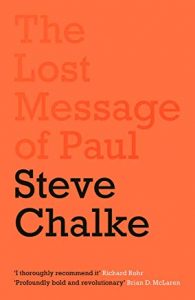 There is one area where I strongly agree with Chalke – we should not merely use the Bible to proclaim our own pre-conceived views.

We should not “force our preconceived cultural assumptions on to this extraordinary first-century pioneer”. And yet we find that The Lost Message of Paul astonishingly reflects exactly what Steve and 21st Century liberals are concerned about – homophobia, Islamaphobia, climate change etc.

He also rightly warns about taking a few verses out of context and “using them as a prop for their own pre-developed ideas. It still happens”.  Indeed it does. This book is a prime example.

“If we respect the Bible we can’t simply use it as an echo chamber to magnify our own thoughts and opinions.” That’s what I find distinctly uncomfortable about the Bible. I have my own opinions and views and often I find that the Bible does not agree with me! But my opinions can be wrong, God’s Word never is – and it is wrong of me to judge the Word of God and try to make it suit my personal, social and political views. Once you remove the certainty of the Word of God, all you are left with is your own opinions (or others).

The Lost Message of Chalke

In conclusion, this book begins well in that it discusses Paul and his context, but by the end, Paul is removed to the sidelines, as the lost message of Steve Chalke takes centre stage. Paul retreats into the background as Steve discusses his ideas of heaven and hell, the wiring of the brain and what ‘salvation’ really means. Paul barely gets a look in.

Chalke’s Lost Message is a 21st century fulfillment of what Paul warned the 1st century Galatian church about: “I am astonished that you are so quickly deserting the one who called you to live in the grace of Christ and are turning to a different gospel – which is really no gospel at all. Evidently some people are throwing you into confusion and are trying to pervert the gospel of Christ.” (Galatians 1:6-7)

My hope and prayer is that Steve Chalke will turn back to the Gospel he once believed, and use his considerable gifts in the service of the real Christ and his message. If we follow Chalke’s Lost Message we will not only lose the message of Paul, but we will also lose the message of Christ. I can think of nothing more tragic and deadly.