I am grateful for the enthusiastic response so far for A.S.K and for the encouragements from others: This one is from a man I greatly admire and respect – whose job is to work with teenagers.

‘If you’re a teenager trying to follow Jesus it is more than likely that you’ve asked most of the 52 questions that David Robertson tries to answer. These are real questions and David doesn’t fudge the answers. Like a friend of mine who worked with young people, he doesn’t think he is the fount of all knowledge so, whatever the question, he begins by finding a Bible passage that speaks to the issue and roots his answer there. This is not just an AMA (ask me anything) session. This is; what does God’s word have to say? Then when he gives his answer he asks us to pray. That’s is because we’re not dealing with theoretical or academic concepts. These questions are real and affect our lives. They turn us to God in worship and thanks and encourage us to bring our concerns to him.
David Robertson is real. He talks about his own experience and the struggles he has gone through. And he is never boring; always gettng to the point and not confusing us with jargon. It’s not going to give you easy answers but they are satisfying.
You can dip into this book or read it through. If you’re serious about following Jesus it will not only strengthen your faith but it will equip you to speak confidently to others about it.’  Andy Bathgate – SU Scotland 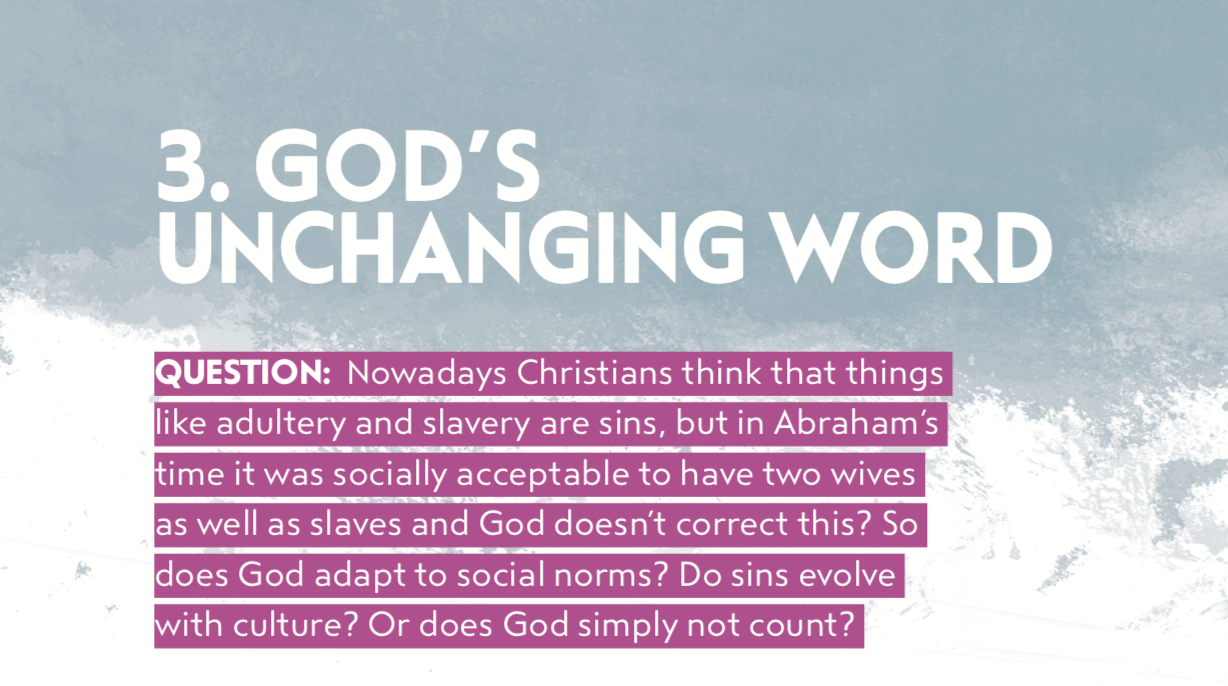 TEXT: We know that the law is good if one uses it properly.
We also know that the law is made not for the righteous but
for lawbreakers and rebels, the ungodly and sinful, the unholy and irreligious, for those who kill their fathers or mothers, for murderers, for the sexually immoral, for those practicing homosexuality, for slave traders and liars and perjurers—and for whatever else is contrary to the sound doctrine that conforms to the gospel concerning the glory of the blessed God, which he entrusted to me (1 Timothy 1:8-11).

This is a great and important question. It is also one that is asked a lot – not least because there are parts of the Bible that seem, in the light of our culture, to be horrific.

Do you know what the word ‘zeitgeist’ means? It refers to the mood, spirit or understanding of a particular time or culture. Can we judge people from another culture and another era by the values of ours? The answer really has to be no. We can’t. But the Christian has a different perspective because we believe that every era and every culture can and should be judged by God. This is where the problem behind the question lies. It’s not that God does not count – it’s more that there seems to be a change in standards. But is this really the case? God’s character does not change. He is always holy, glorious, good, loving and just. His law, based upon his character, does not change – murder is always wrong. Rape is always wrong. Stealing is always wrong. Racism is always wrong. False worship is always wrong. Sin is sin.

I don’t think that there is a change in standards. It’s just that God reveals himself and his will gradually. It’s a bit like a curtain being pulled back slowly and the light being gradually let in. It’s what we call ‘progressive revelation’. God’s law reveals more and more of his standards and as it does so, it shows up our sin and the sins of our culture. Paul gives an example of us when he speaks to the philosophers in Athens:

‘In the past God overlooked such ignorance, but now he commands all people everywhere to repent. For he has set a day when he will judge the world with justice by the man he has appointed. He has given proof of this to everyone by raising him from the dead’ (Acts 17:30-31).

You see that everything leads up to Jesus.  As Paul tells the young man, Timothy, in today’s passage ‘the law is good if one uses it properly’. 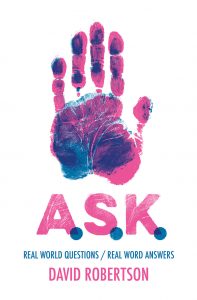 There is also another principle called ‘accommodation’. When God communicates with us he needs to accommodate himself to us, so that we can understand and apply what
is being said. Accommodation also means that God reveals himself in the context of our culture and seeks to change it through his Word. It is evolution not revolution.

It is also an important principle to remember when we are reading the Bible that much of what we read is descriptive (describing what happened) and not prescriptive (telling
us what should happen). For example, when we read about Jephthah sacrificing his daughter, that is not a command for fathers to do likewise today!

Let’s see how this works out in terms of slavery. Some people think that the Bible condones slavery. I don’t. I think it regulates it in cultures where it was practiced, (Abraham’s and the Greco/Roman culture in which the New Testament was written) but the teaching of the Bible as a whole is against the idea and practice of slavery. So in the passage we read we find that slave traders are guilty of breaking God’s law … if there are no slave traders, there will soon be no slaves!

You also need to remember that the Bible is not primarily a law book, or a ‘how to’ book. It is a revelation both of God and a description of the sinfulness of humanity and the remedy that God has provided to deal with that sin. The fact that God accommodates himself to us in order to reveal his glory and lead us to repent of our sin, does not mean that God approves of our sin.

At the end of the day, Paul gives us a great standard here. Everything must conform to the sound doctrine that conforms to the gospel concerning the glory of the blessed God. Once you get that as the big picture, the smaller details will fall into place.

CONSIDER: What do you think would have happened if we had been given all God’s law at once and told to obey it immediately or be destroyed? Why do you think God gradually revealed the gospel?

PRAYER: Lord God, we thank you for the wisdom in your Word. We thank you that over hundreds of years, you gradually revealed your will and Word, until the final Word, Jesus Christ came. We bless you that he is the bigger picture and once we read your Word in his light – it becomes so much clearer. Help us to understand and apply it today in our culture, in the name of Jesus. Amen.

You can purchase A.S.K on Amazon, or from CFP, or Ten of Those or at any good bookshop.

In Conversation with Andy Bannister – A.S.K and Australia