Several people contacted me about the BBC programme ‘Shake on It” – Shake On It – A Surprising BBC Programme on Trans and Identity.   The trouble is that if you are not in the UK you can’t view it.  I understand that at some point it will be on YouTube but until then you can get it by clicking the link below. 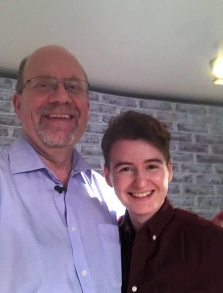 Again to give credit to the production company they edited this fairly – and the five minute programme does reflect the 90 minutes discussion!   When I wrote a few months ago about recording this ‘Shake On It’ – An Interesting Day Recording for the BBCI expressed my concern that it would be highly edited – something shared by one of the comments:

As I am sure you realise this was an attempted “set up”. “Hate-filled trans phobic Christian bigot versus vulnerable teenage trans man”. I have no doubt that you handled it with empathy, wisdom and love. But if I was a betting man (I am not) I bet that you will be almost totally edited out of the final program other than some random comment which will be portrayed in a negative way.

Please may I be proved wrong. And I will go on praying (and campaigning) for the vulnerable Victors who are being dreadfully harmed by this vile Queer theory.

Well – that prayer was answered!

Here is the original video from Victor:

One of the fascinating things about this is that Victor in this video states that she is non-binary.  But at the interview he announced that he had changed from non-binary to male.  This is what gender fluidity means.

This week Jayne Ozanne  announced that she had been appointed to the UK government’s new panel on LGBT rights.  Jayne is a former evangelical who now allies with the anti-Christian Stonewall and other groups in order to undermine the teaching of Christ.   It is hard enough to combat the harm that Queer Theory ideology is wrecking upon our young people, without professing Christians seriously undermining and attacking the biblical theology and anthropology.    Rather than a few professing Christians serving on government boards telling the government what they want to hear we need thousands of Christians engaging personally with the Victors of this world, seeking to share the love of Christ.

The following also came about because of my engagement with transgender

The Dark Side of Transgender Ideology

And here are some other articles on this blog.