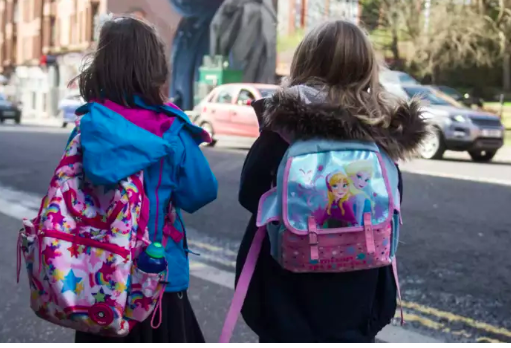 I’m just about to speak at Creationfest  but before I do so I want to share with you something that was published in The Scotsman today.   Look at the comments section as well – but read the text.   When I warned (‘prophesied’) about this a few years ago I was abused and told I was mad – even by some Christians who told me basically to shut up because I was scaremongering and this would never happen.   (See this article which the Scotsman article refers to and many other articles on this blog – I will put the links at the end of this blog) The reason I have been so persistent on this is because I saw precisely this day coming.

Children from the age of five could be taught in school that they should “decide” their gender. Teachers across Scotland will tell children it’s up to them to decide if they are a boy a girl or if they “don’t like to decide that” from as early as primary one.  Under the draft guidelines created by Education Scotland, NHS boards and the Scottish Government, children will be told in classrooms that “Your gender is what you decide.” The guidelines, set to come into effect in 2019, say, “Your sex is what you are told by a doctor when you are born. Most people are told they are a male child (a boy) or a female child (a girl). “People might think they know your gender because of the clothes you wear or the things you like to do. You are a unique person, you know who you are.”

But politicians and experts have warned that the plans risk confusing young children before they are ready to understand gender and identity. Scottish Conservative education spokeswoman Liz Smith said, “It’s right that we teach children about gender diversity and the meaning of these terms. However, many parents might feel this is too young for their children to learn about it.”

The guidelines will form part of an online educational resource Relationships, Sexual Health and Parenthood, a teaching resource to be used in schools and early years. •

READ MORE: David Robertson: Children are being indoctrinated over gender – they should find identity in Christ

Lessons will teach children that everyone is equal and that assumptions based on how others see our gender shouldn’t limit what we can do in life. Under the plans, teachers will give examples challenging gender stereotypes, saying both boys and girls can play football or bake a cake and that both sexes can cry or express feelings. It has prompted fears that it’s overloading children with too much too soon. Dr Amanda Gummer, child psychologist, said, “For most kids, this isn’t a concern at this age. Playing with toys and who sits beside them at lunch is what they care about.” “At ages five to eight, things are black and white. Many don’t have the cognitive skills to understand this.”

NHS Greater Glasgow and Clyde, who commissioned the new resource on behalf of a partnership of agencies, said: “This new resource, while still in its early stages, will cover issues that young people themselves have told us are important to them such as consent, healthy relationships, emotions and feelings as well as LGBTI issues. •

“There is a recognition that current resources need to be updated to fully meet young people’s rights, experiences and learning needs.” “It is being developed in line with the Scottish 3-18 in Curriculum for Excellence, and both content and methodologies will be appropriate to the age and stage at every level.” “It is important that the advice and learning young people receive is relevant to its time and provides them with the knowledge and skills to help keep them safe and make the right decisions for themselves.” “The new learning and teaching resource has the backing of education and sexual health experts across Scotland.”

It comes as the Scottish Government is facing a court challenge over schools guidance suggesting teachers don’t need to tell parents if their child wants to change gender. The Christian Institute (CI) has threatened legal action against the Scottish Government guidelines on supporting transgender children and consent to discuss transgender choices with a child’s family. No centralised figures are held for the number of Scottish pupils who express a desire to change gender. However, anecdotal evidence from LGBT youth workers suggests almost all of the 200 schools visited were dealing with at least one “transitioning” child.

The Scottish Government and the civic elites who run our NHS and Education establishments must be opposed….EVERY politician, teacher, NHS administrator, doctor, lecturer, journalist, parent and indeed responsible citizen, must say enough is enough.  We refuse to let the children of this land be indoctrinated in a political/sociological theory which has ZERO scientific or empirical evidence.  To those of you who said it doesn’t really matter because it only affects a tiny minority – you no longer have that excuse.   Now the Scottish Government are proposing that every child be indoctrinated in Queer theory and told that ‘your gender is what you decide’.  It a confused, contradictory, nonsensical, harmful message.  It is nothing less than State sponsored child abuse.  We cannot let it happen.   We have a responsibility for every child in Scotland…is your/my career more important than our children?

An Open Letter and Plea to Justine Greening, Minister of Education on her Gender Identity Proposals

What Would Jesus Do About Transgender

The Reimaging of Humanity

Scotland’s Babylon- Who is Going to Speak for Scotland’s Children?

Gender, The Gospel and a Modern Tower of Babel