Letter from Australia 101– The Revolutionary Church in the Borders, The Highlands, Korea and “I can’t be bothered”..

Thanks for all the responses to last week’s letter – even those that were less than complementary – iron sharpens iron!  That letter came from the fact that my heart is heavy and burdened for the Church in Scotland.  Right on cue this piece of news about the Borders came to mind.

The ‘Chaplain to the Queen’, Rev Dr Susan Brown, formerly of Dornoch cathedral, “has been appointed as a Worship Advisor within the Presbytery of Duns and will help congregations continue to thrive without a parish minister of their own. She will spend four days a week supporting people in preparing and delivering worship and one day serving as the new minister of Greenlaw Parish Church.”  This is going to ‘revolutionise’ the Church in Berwickshire.   But it is in reality an excellent example of what is wrong with the Church and why it continues to decline.  It’s all spin and little Gospel.   I recall when the Presbytery of Shetland had to reduce its number of charges from 20 plus to a handful.  A spokesperson came on to BBC Radio Scotland and spun the nonsense of how this was brave, revolutionary and would transform the Church.  In Berwickshire, the Presbytery is going down to only four full time ministries – and that includes the town of my birth, Berwick- Upon Tweed.

Let me make it clear here – I am not concerned with denominations.  If the Church of Scotland in Berwickshire were seeking to plant or revitalise biblical churches then I would be delighted – as should any Christian. Although I have experienced individual Church of Scotland’s who have been a credit to the Gospel and who have sought to co-operate with other biblical Christians, irrespective of denomination; overall my experience of the C of S and church planting has not been good.  I have seen C of S officialdom do their best to undermine, passively and actively,  church planting and gospel proclamation which was not under their control.  Many still have the mentality that ‘this is our parish and you can only do something with our permission’.  In the name of bringing the Gospel to all the people of Scotland, they have hindered the bringing of the Gospel to people within ‘their’ parish.  As regards the remaining ministries in Berwick – it may be that each of these ministries will preach the Word of God – and call the people to repentance and faith.   Then the Lord will bless it.  But if it is just rearranging the ecclesiastical deckchairs on the Titanic of the current Kirk, it will sink without trace!

The Church of Scotland, as well as reducing global emissions to net zero, seeks to reduce the number of its ministers to 600 by 2025.  This is a reduction of 200 ministers 25% – but doubtless will be spun as ‘revolutionary’.  But this is not the kind of revolution that ‘turned the world upside down’ (Acts 17:6).  It’s the accountant’s revolution of managed decline.

“It is confessed that many of our ministers to not preach the gospel – alas! Because they know it not.  Yet they have complete control over their pulpits, and may never suffer the truth to be heard there during their whole incumbency.  And yet our church consigns these parishes to their tender mercies for perhaps fifty years, without a sigh!  Should not certain men be ordained as evangelists, with full power to preach in every pulpit of their district – faithful, judicious, lively preachers, who may go from parish to parish, and thus carry life into many a dead corner?”.  (Robert Murray McCheyne)

There are those who are seeking to proclaim the Bible in the Borders – an area I know and love – and where my dad and much of his family came from.  I am delighted that they are soon to be joined by Craig Anderson, a young Free Church minister, who with his wife Amy and their young family, are heading to Gala to begin a new church there.  Craig is from the borders and was one of my elders in St Peters.  This is a bold and encouraging move.  If you would like more information, then why not contact Craig – craig@stpeters-dundee.org.uk

In that same regard I was really encouraged and moved by this short video from Tain/Free Free Church. This is an area which like Dundee, and the Borders, has known great Gospel blessing in the past, but like these areas has suffered lean times more recently.

In reality this video also celebrates something really revolutionary.  A minister from my home area of Easter Ross – the Rev. John Ross – a remarkable man who spoke 11 languages and ended up going from the Highlands of Scotland to Manchuria, where he translated the New Testament into Korean. His legacy is still felt today – in some sense he is the founding father of the modern Korean church.

I loved the enthusiasm of Andy, the minister, in the video – and the joy and the simple but profound faith of Maureen was fantastic.  I used to say that if you gave me ten of the Brora Christians in Dundee, we would turn the city upside down.  That was not to disparage any of the people in Dundee (there were at that point very few in the Church), but simply to praise the people in Brora I knew who enthusiastic, whole-hearted, hardworking were, and with a simple but profound faith.  That is revolutionary.   All the strategies, plans, rearranging ministries etc just doesn’t cut it.  It’s people who are on fire for the Lord who turn the world upside down!

“We Can’t be Bothered”

I mentioned hard working.  That is something else that has really struck me.  Paul reminds Timothy “The hardworking farmer should be the first to receive a share of the crops.  Reflect on what I am saying, for the Lord will give you insight into all this”.  (2 Timothy 2:6-7).   Annabel and I have been working through Romans and we are loving it…. Last week we were in Romans 12 and 13. “Never be lacking in zeal, but keep your spiritual fervour, serving the Lord.” (Romans 12:11).  I wonder if a lot of us have lost our zeal and spiritual fervour?   Have we become ‘weary in doing good’?  (Galatians 6:9).

I suspect that during Covid some of us have got into patterns that encourage lethargy.  So for example, churches restart meeting in public, but we can’t be bothered having tea or coffee, having the worship band, or others things that are hard work.   Some churches follow Covid rules far more stringently than required.  I suspect that some do so out of a mixture of motives – care, fear and sadly,  lethargy.  Sometimes we just can’t be bothered.  We have got so used to watching online in our PJ’s that we can’t be bothered going out to church – getting dressed, walking/driving, meeting people. Never mind being part of the greeting team, making tea, worship band, cleaning up.  “I still love Jesus – but I can’t be bothered’.  He came down from the glory to the cross – we can hardly go down the street!

Lethargy can come in different ways – physical, emotional, mental and spiritual.  But it is often ungodly.   “And do this, understanding the present time: The hour has already come for you to wake up from your slumber, because our salvation is nearer now than when we first believed.  12 The night is nearly over; the day is almost here. So let us put aside the deeds of darkness and put on the armour of light.” (Romans 13:11-12) 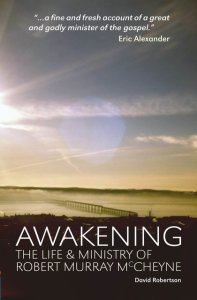 Perhaps more than anything else the Church needs awakening.  When I wrote my first book on the life of McCheyne, Awakening seemed an apt title. (you can get it from CFP here )-  Spiritual awakening was something that McCheyne longed for and something that he experienced.  Indeed, in the 1830’s and 40’s there was an Awakening that changed the Church in Scotland, and changed the nation.  McCheyne believed that the latter years of the Church would be greater than the former.  Let it be, Lord, let it be – in the Borders, in Dundee, in the Highlands, throughout the land – and even unto the ends of the earth.

PS.  From a different tradition and perspective, we watched HTB and Nicky Gumbel on Sunday evening.  I found the sermon profoundly moving – and the very opposite of the spiritual lethargy described above – The whole service is worth watching but if you are short on time just go to the sermon at around 27 minutes.  This is Revolutionary Christianity.

Quantum 166 – Blah, Blah, Blah – Nonsense and Sense from all over the world.

Predictions and trajectories: What will the Church in Scotland look like in 30 years?

Robert Murray McCheyne in Larbert &#8211; Lessons from a young minister in the 19th Century