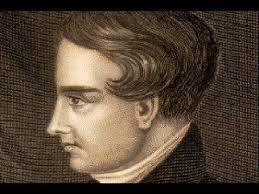 (This is the substance of a talk I gave in the place where McCheyne began his ministry.  It is not just of historical interest – there are lessons to be learnt from McCheyne in his ‘assistantship period’ for today.

Robert Murray McCheyne was a young man from Edinburgh who became the minister of St Peter’s Church in Dundee when he was only 23 years old in 1836. Although he died in

1843, his ministry is very famous. A book by his best friend Andrew Bonar entitled “The Memoir and Remains of Robert Murray McCheyne” became a best seller and McCheyne is known all over the Christian world because of his work and the revival that took place in Dundee. If you want to learn more about him then I have written a book called Awakening which tells his story in a way that I hope you will find interesting and stimulating.   What I would like to share with you just now is some of his work before he went to Dundee – here in Larbert and Dunipace.

On the 7th of November 1835 McCheyne was ordained and inducted as an assistant to the minister, John Bonar. It was a fascinating parish for McCheyne to be involved in. Larbert and Dunipace could lay claim to being the first industrial parish in Scotland due to the establishment there of the Carron Ironworks in 1759. In 1835 the community itself was in a period of rapid growth – the population had increased from 400 in 1790 to 6,000 in 1835. This included over 2,000 industrial workers.

However the growth in the population and increasing prosperity meant that there was an increase in drunkenness and a general decline in public morality. Religion, whilst not unimportant, was in proportionate decline. Services were held every week and membership in the church increased to several hundred. In Larbert there was the unique problem of men who had been slaving over hot fires all week, finding the church too cold!

The week after his induction McCheyne wrote, “Today I am going to visit from house to house”. Much of his time in Larbert was to be spent doing this. It was something that he greatly enjoyed and excelled in. Although at the beginning he struggled with questions of relevance and how to relate to the people, he learnt quickly. He sought to use illustrations, to be simplier in his speech and to press home the spiritual lessons he taught. He records that one third of the sick he visited died, many within a day of his first visit.

He kept detailed systematic records of where he visited and what he did in each home. These make really interesting reading – here are a couple of examples – “Major Dundas is a curious mixture of a character. He is an Elder, most attentive at Church, – visits the sick – has family prayers – talks a great deal about religion – plays the guitar – sings – tells absurd stories – in short a puzzle. Mrs Dundas is a deep sea – gracious and condescending – professes great religiousness – is full of whim and conceit – she has two little daughters 11 and 12 – who glide in like fairies most elegantly dressed”.   Writing to his parents in the summer of 1836 he records his impression of a visit to an elderly woman – “she is the worst melancholy monument I ever saw. She is so deaf that she says hardly anything can make her hear. She is so blind that she cannot read – and she is so cold and careless that she does not want to know. And she is so old that she will very soon die – I suspected that she made herself more deaf than she was in reality and therefore tried to make her hear. She knew that Jesus had shed his blood. But when I asked her why? She said that ‘really her memory was so bad she did not know but her husband used to be a grand man at the books!”

He also learned quickly when it came to preaching. There were five preaching stations around Larbert and so McCheyne preached three times on Sunday and several times during the week at Bible classes and meetings. Wheras Bonar preached for one and a half hours, McCheyne usually preached only ‘only’ 35 minutes because he thought the people could not stand much more. His sermons were simple and concentrated on the basic doctrines of the Christian faith.

One other aspect of McCheyne’s work in Larbert was his work amongst young people. The 22 year old minister started classes for young people. In these he used his musical and artistic abilites to good effect. His aim, as he told his parents, as to “entertain them to the utmost,, and at the same time to win their souls.”   He succeeded in gathering a group of sixty young people. He had a genuine empathy and love for young people. An example of this is a letter he wrote to a teenage boy who was looking for work – “I do not know in what light you look upon me, whether as a grave or morose minister, or as one who might be a companion or friend; but, really, it is so short a while since I was like you, when I enjoyed the games which you now enjoy, and read the books which you now read, that I can never think of myself as anything more than a boy. That is one great reason why I write to you. The same youthful blood flows in my veins that flows in yours – the same fancies and buoyant passions dance in my bosom as yours – so that when I would persuade you to come with me to the same Saviour, and to walk the rest of your life ‘led by the Spirit of God,’ I am not persuading you to anything beyond your years. I am not like a grey-headed-grandfather – then you might answer all I say by telling me that you are a boy. No: I am almost as much a boy as you are; as fond of happiness and of life as you are; as fond of scampering over the hills, and seeing all that is to be seen, as you are.” Using his artistic and musical gifts with the young was something McCheyne was keen to develop.

He was only in Larbert eleven months and yet for McCheyne these were crucial for his forthcoming ministry in Dundee. What he had learnt in Edinburgh he was able to practice in Larbert and Dunipace. We too can learn from him today.

We Should Celebrate Robert Murray McCheyne