Letter from Australia 96 – An Encouraging Funeral and Fond Memories

“Days like these are not for looking back on a life that’s lived , but looking forward to a life that will be. ”
Andrew Robertson

I was dreading yesterday – the day of my dad’s funeral.  The frustration of not being able to be there and support my mum; the inability to be physically present in the church and at the graveside; the missed opportunity to meet dad’s friends and family you only normally meet at funerals.  So, we sat down just before 8pm Sydney time and up came the Zoom of Rosskeen Free Church.

It was for me, an astonishing service.    Ps 16 had me in tears, the other songs, In Christ Alone and O For A Thousand Tongues, were well sung and appropriate.

But it was the sermon, by my son Andrew, which was most astonishing. He preached from 1 Thessalonians 4:13-18.

Brothers and sisters, we do not want you to be uninformed about those who sleep in death, so that you do not grieve like the rest of mankind, who have no hope.14 For we believe that Jesus died and rose again, and so we believe that God will bring with Jesus those who have fallen asleep in him. 15 According to the Lord’s word, we tell you that we who are still alive, who are left until the coming of the Lord, will certainly not precede those who have fallen asleep.16 For the Lord himself will come down from heaven, with a loud command, with the voice of the archangel and with the trumpet call of God, and the dead in Christ will rise first. 17 After that, we who are still alive and are left will be caught up together with them in the clouds to meet the Lord in the air. And so, we will be with the Lord forever.  18 Therefore encourage one another with these words.

I will put up a link to the service when we have it – but for me let me just simply says that v.18 was more than adequately fulfilled.  How can you be encouraged at a funeral?  When you know the hope of Christ – the promise of his resurrection and return, and the promise of meeting again in heaven.  I won’t meet my dad in Portmahomack, although God willing, I will visit his grave, but I will see him again.

Annabel and I recorded this eulogy and prayer which were played at the funeral.  Not everyone on the Zoom was able to hear it, so I promised I would put it up here.

There are many stories about Dad – some I shared in the above video (his advice to me about work, Fiona’s baptism, but there are a few more I did not have time to do – so here are a couple more.  Many people knew him as Teddy, his nickname from boyhood.  I understand he got this name not because he looked like a teddy boy – but because for a long time he was reluctant to let go of his teddy!

Pixie – The Shetland Pony and the Freedom of Childhood. 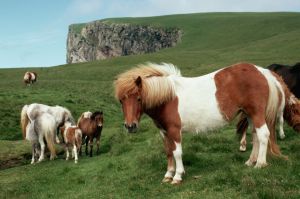 When we lived in the Cotswolds the boss sent my dad to buy some cattle – he came back not only with them, but also a Shetland pony called Pixie.  The only problem is that she had not been broken in.  So together we set about doing that.  On one occasion he put a blanket on her back and then I had to ride her without bridle or saddle.   Dad could not stop laughing when she suddenly stopped, at full speed, put her head down for some grass, and I went flying. It was the first of many falls.    When we eventually ‘broke’ her I was allowed as a nine-year-old to go riding, with a packed lunch, a cowboy hat and an air rifle, to go and ‘hunt rats’.  It was a boyhood dream.  I think one of the positive things about my upbringing was the freedom granted by my parents – which today would be seen as immoral if not illegal.  Working with animals, hitchhiking, playing on cliffs, fishing and camping and guns…. speaking of which……

I thought I could easily fire a gun.  After all I had seen it done many times.  So, I told Dad I wanted to try the 12-bore shotgun.  Dad was happy to do so, and told me to hold the gun tightly to my shoulder.  When I pulled the trigger, it knocked me over, as Dad knew it would.  The reason he got me to hold it tightly was to make sure my shoulder did not get bruised.  I learned to respect guns and not to fool around with them.   This was especially true of the 2:2 rifle which had a range of over a mile.  The air rifle was my favourite as well as the 4:10.   One time my son, Andrew, was shooting an air rifle at tin cans, when a pellet bounced off a fence post and killed a chicken!  He was distraught.  Dad was highly amused.   Not sure what mum thought about the loss of one of her chickens!

I rebelled against my Christian upbringing and tried to be a militant atheist – I was not very good at it.  I refused to go to church aged around 12.  We were not allowed the TV on on Sundays but when mum and dad went off to evening church, we use to watch it, and have one of us posted at the window to watch when they came back.  The problem was even if we switched the TV off, it was one of the old sets where the back remained warm for a while.  Dad would put his hand upon the back and check if it was warm, so that he would know if we were lying.   We however learned to put a damp cloth on the back and then dry it in seconds!

Times change.  Having been a family which had no TV in my early years.  And then no TV on Sundays – to Dad being enormously thankful for being able to watch it.

I wondered if Dad had been concerned.  I never told him or my mum when I became a Christian – was it because I did not want to admit that they were right?!   When I was training to be a Free Church minister, I came home to Pitkerrie farm and was out in the fields helping him collect stones.  I then told him I was a Christian – he smiled; “I kind of figured that’!   I asked him if he had been worried during my rebellious phase.  He told me that although he was concerned, he remembered Mr Brown.  Because Dad was a farm worker, and in those days, we lived in a tied cottage, we moved around a lot.  One such time was when we moved from the Cotswolds up to Easter Ross.  Before we left, the Brethren Assembly in Cheltenham held a farewell.  During that an old man called Mr Brown, stood up and said that though he was going to miss the whole family, his special burden was for me and, unusually for a Brethren man, he made a prophecy – “Don’t worry about David, he will grow up to be a missionary, – and I will pray for him every day until I die.”   The interesting thing for me was that dad never told me that until after I was converted and in the middle of theological training. It was a comfort for him, not something to pressure me.  I found it quite amazing and reassuring.

On the night before Dad’s death, I had a really strange dream.  Sometimes in dreams I will dream about my death – up to the point of actually dying.  I would always wake up before the car hit me, or the axe fell.  Yet that night I dreamt I actually died.  It was a vivid and heavy dream.  When I woke I knew within myself that he had died.  Then I saw that there was a missed call from my mum.  As I walked through the bush and phoned her to receive the news, there was a strange sense of peace.  I believe that the Lord, in his graciousness, had prepared us, and him, for his death.  That same sense of peace – and encouragement – was present at the funeral.  So we grieve, but not like those who have no hope,

Letter from Australia 95 – No More Sea.