Letter from Australia 95 – No More Sea.

Then I saw “a new heaven and a new earth,” for the first heaven and the first earth had passed away, and there was no longer any sea.  2 I saw the Holy City, the new Jerusalem, coming down out of heaven from God, prepared as a bride beautifully dressed for her husband.  3 And I heard a loud voice from the throne saying, “Look! God’s dwelling place is now among the people, and he will dwell with them. They will be his people, and God himself will be with them and be their God. 4 ‘He will wipe every tear from their eyes. There will be no more death’ or mourning or crying or pain, for the old order of things has passed away.”

I write this from Sydney with a sad and joyful heart – such is the paradox of the real Christian life.  Yesterday, two days after this 88th birthday, my dad, went Home.   It is such a strange range of emotions one goes through.  I write this because already so many have been in touch (and that has been deeply moving) and rather than respond with the same cliches to each one – I thought I would write and answer your question ‘how are you doing?”

A time will come when it is appropriate to write a more detailed account of my father – but that time is not this day.  Suffice it to say that he was a man who will not get anything more than a line, if that, in the obituary notices of this world – but he will get a glorious welcome into heaven.  He was a humble, hardworking, faithful man who struggled with assurance, self-doubt and yet never let that get in the way of serving the Lord he loved, looking after his family, and earning the respect of all through hard graft, generosity, and dutiful service.  He was a good dad to me.

There are a range of emotions that one feels at this time.  Sorrow and anger being two of the most prominent.  Death is the last enemy – but it is still an enemy.  Jesus wept and was angry because of the death of his friend Lazarus (even though he knew he was going to raise him from the dead!). The empty platitudes and well-meaning meaningless cliches were not for our Lord!  The Christian mourns – and any Christian who says they don’t is either deluded or heartless.   I weep for my dad.  And for my mum. And for his brothers and sisters… And for children, grandchildren, and great grandchildren.  The idea that ‘Grandpa Lambs’ will no longer be there with ‘Granny Chickens’ will be hard for them.

But there is also joy.  A joy and peace that drowns the sorrow.  When King David’s baby son was dying, he wept and fasted.  When the child died, his servants were afraid to go and tell him in case he would ‘go and so something desperate’.  When David became aware of the death of his son, the servants were astonished that he goes up, washed, dressed and had something to eat.   “His attendants asked him, “Why are you acting this way? While the child was alive, you fasted and wept, but now that the child is dead, you get up and eat!” He answered, “While the child was still alive, I fasted and wept. I thought, ‘Who knows? The LORD may be gracious to me and let the child live.’ 23 But now that he is dead, why should I go on fasting? Can I bring him back again? I will go to him, but he will not return to me.” (2 Samuel 12:21-31).

As I walked the Artarmon Reserve early this morning taking in the news that I would never see my dad again on this earth, I was struck at how peaceful it was – and I was.  And then I realised why.  We had prayed that dad, who had had a difficult past year, would know peace, freedom from pain and assurance of the Lord’s presence.  Now our prayers are answered.  Death for the Christian is, as Sibbes states, the best day of his life!  We mourn for those who are gone – but not as those who have no hope.

I was struck by something that I read in C S Lewis’s Prayer: Letters to Malcolm just yesterday.  He spoke of his belief in Purgatory.    Take this extraordinary passage: “Our souls demand Purgatory, don’t they?  Would it not break the heart if God said to us, ‘It is true my son, that your breath smells and your rags drip with mud and slime, but we are charitable her and no one will upbraid you with these things, nor draw away from you.  Enter into the joy?  Should we not reply, ‘With submission, sir, and if there is no objection, I’d rather be cleaned first. ‘It may hurt, you.’  ‘Even so, sir.’

I think Lewis’s normal biblical common sense has departed him here.  And I suspect that is because his doctrine of the Cross is not robust enough!    My father did not wear his heart on his sleeve (he didn’t even wear it in his pocket!).  Like many of his generation he was reluctant to speak of deep spiritual, personal things – not out of cowardice or ‘stiff upper lip’ but I suspect because he didn’t know how to, and, given the holiness of these things, who could he speak to?  I prefer his depth to the shallow superficiality of those who speak of the deep things of the soul, as though they were ice cream.

Therefore I am profoundly thankful that in these past weeks I had the two deepest conversations, even over the phone, that I have ever had with him.  We discussed assurance.   If I had told him Lewis’s point of view, he may have all too readily accepted it – and how miserable that would be!  ‘Yes – you are clothed in filthy rags and when you die to you going to purgatory to suffer and be cleansed!’  What a ‘half hope’ Gospel.  Instead, I was able to point to the God who gives beauty for ashes, and the oil of joy for mourning (Isaiah 61:3).   My dad will not stand before God in the stinking rags of his own righteousness, but the beautiful robes of the righteousness of Christ.  He will not be purged – because Christ was purged for him.    In the providence of God, I also saw this wonderful sermon from Alister Begg.   This clip alone answers Lewis.   My dad is in heaven because the man on the middle cross said he could come!

Having seen that and knowing the conversations and readings I have had in the past weeks; I think the Lord has graciously been preparing us for when He would take my dad Home.  One aspect of this was the beautiful prayer Annabel (who is such a strength to me in these times), prayed last Lord’s Day asking that my dad would know peace as he passed through death into the New Life.  I was not surprised when during the week I kept hearing how peaceful and less agitated and painful he was.   The Lord hears the prayers of his people.  Another was his love for his grandson Andrews preaching, which fed his soul.  Another small detail is that this weekend I was supposed to be in the Blue Mountains speaking at a youth conference.  I regard it as a mercy that, because of lockdown, I am not there and instead am at home with Annabel.

Without going into too much detail, and at the risk of sounding absurd, let me say that this morning I woke up feeling that something momentous had happened – and that that something was probably my dad dying.  I had had a horrendous night – what Psalm 91 calls ‘the terrors of the night’ and woke up exhausted and glad that my dreams were just dreams.  But I also knew that they were a portent of something all too real.  The human mind, spirit and body are mysterious.  But the Lord knows, and the Lord prepares.   I didn’t need to look at my phone to know that he had gone.

Mind you when I did it was a bit amusing – in the midst of the sorrow.  My mum had left a message asking me to call her – but forget to switch it off when she turned to my brother and told him that she didn’t want to tell me in a message!    I was glad to call her and say I already knew.  Dad is at rest.  He has gone Home.

Let me return to C S Lewis.  In his next letter to Malcolm, he makes a wonderful statement “There is no morality in Heaven.  The angels never knew (from within) the meaning of the world ought, and the blessed dead have long since forgotten it”.  I think my dad was plagued, like many of us, by the word ‘ought’.  He often felt as though he ought’ to have done this, said that, been like Him.  But now he is free from that.  As Lewis puts it “In the perfect and eternal world the Law will vanish.  But the results of having lived faithfully under it will not.”  My father is not in heaven because he lived faithfully under the Law and kept it; he is in heaven because he knew he couldn’t, and he believed and trusted in the One who could and did.  For us.

The worst thing about all of this is the separation.  Firstly, the separation that is caused by a loved one leaving.  Which is why I so love this song from the end of Lord of the Rings.

My dad is now going ‘into the West’ and crossed the Jordan.  There is a separation.  Which is why those verses from Revelation 21 are so beautiful and comforting.  He will not come to me – except in memory and dreams – but I will go to him.

But the other separation is that caused by the seas in this world.  I live on a massive island which I cannot leave because of this accursed plague.  And because of the politicians and technocrats who in the name of humanity adopt the inhumane practice of preventing loved ones being at the death beds or funerals of their loved ones.   They think they are saving lives.  I think they are distorting them.  Because they have forgotten the sacredness of life, they feel they have permission to behave in such a cruel way.   My dad died the weekend Australia’s Premiers persuaded the federal government to half the meagre number of people they allow to fly in and out of the country.  Now even if I could get permission to fly out of the country (which I wouldn’t) it would cost me $150,000 just for the flights! 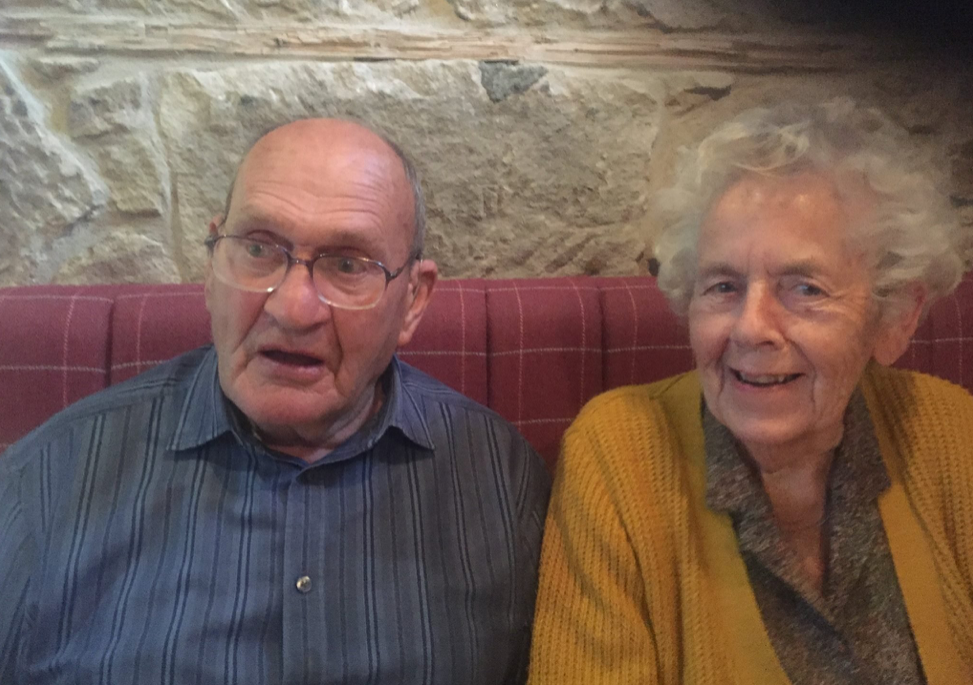 The imagery in Revelation 21 is not saying that there will literally be no sea.  Revelation is no more a geographical map of the new heavens and the new earth, than it is a history book!  The point is that there will be no more separation.  This world is full of goodbyes.  In heaven there are none – except the goodbye to “death, mourning, crying and pain”.  These will be no more, and Christ will be all in all.   I envy my father going to The Father.  And I look forward to being with them both.  Meanwhile we stay in this vale of tears, and do what we can to comfort one another, and point the lost, starving and hopeless, to the Master of the Feast who says we can come!  I’ve got my seat at the table…I hope you have too!

Letter from Australia 94 – Lockdowns, Liars, the ‘V’ word and Living with Covid