It’s been a while.  Apologies.  We are in lockdown and I hate it – for so many reasons.  But one thing is its hard to remain focused and organised when the days just run into one another and you don’t meet people.   In this letter I want to share with you an article that I have just decided to publish here – rather than on any of my usual outlets – it’s just too controversial – but what do I have to lose?!

But before we do that I thought I would share this photo from one of my favourite places – Robertson’s Point in Cremorne.  It is so, so beautiful. 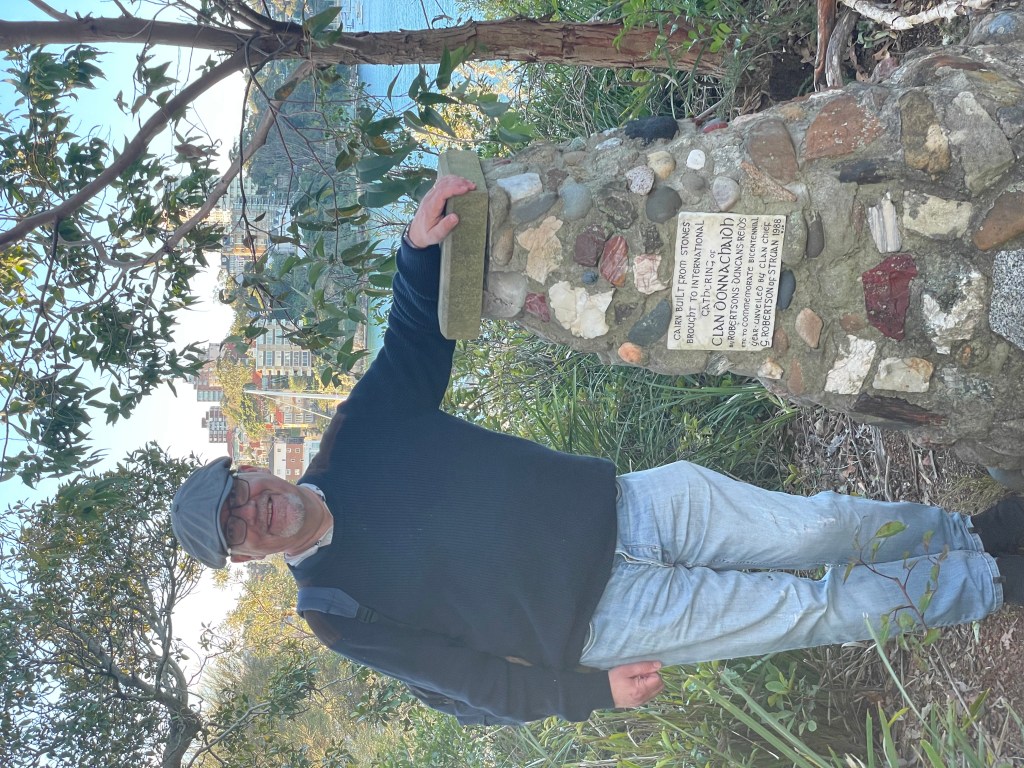 And as you can imagine I have been thinking a lot about my dad.  I was in a local newsagent yesterday and was quite amused to see the sign telling us that the NSW government want us not to go shopping for anything other than ‘essentials’ – but apparently, the lottery and cigarettes are essential!  It astounded me that a pack of 20 cost $20 (about £15)!    I was never really into cigarettes – the occasional cig on the school bus – but when I saw friends who couldn’t run the cross country because of smoking – it seemed to me to be a mug’s game.    However one time when Granny (mums mum) stayed with us I ‘borrowed’ her pack of cigs and shared them round with friends on the bus.  Suffice it to say that when Dad found out, I never did it again!   There was another time he discovered another pack in my school bag.  He went out with the shotgun and told my brother ‘pull’.  At which my brother threw them up in the air and my dad blew them to bits with the shotgun.  I think my second pack was the last  pack of cigarettes I ever had!

Let’s come on to this article.   I wrote it because I was really puzzled by what the PCA General Assembly did this year on the question of Christians who say that they are same-sex attracted.  One of the problems I have is that people get so angry and upset if you don’t agree with them and immediately label you.  The social media world, and US church politics and culture wars, are not a great combination.  So please forgive me if you read any of the following and are offended.  I’m just trying to think things through and understand – not label people or seek to join any particular party!  Anyway here is the unpublishable article.

Should Christians Who Identify as SSA be Ordained?

Sometimes it’s as though the Christian Church in the West has a death wish.  This month we saw the fast-declining Methodist church in the UK vote to speed up its decline by dropping the biblical definition of marriage in order to accommodate the current zeitgeist.  Now at the other end of the theological spectrum, the conservative Presbyterian Church in America (PCA) voted to prevent those who identify as gay Christians being office bearers.

After a lengthy debate at their General Assembly the PCA voted by an overwhelming majority for the following:

6-4 Officers in the Presbyterian Church in America must be above reproach in their walk and Christlike in their character. Those who profess an identity (such as, but not limited to, ‘gay Christian,’ ‘same sex attracted Christian,’ ‘homosexual Christian,’ or like terms) that undermines or contradicts their identity as new creations in Christ, either by denying the sinfulness of fallen desires (such as, but not limited to, same sex attraction), or by denying the reality and hope of progressive sanctification, or by failing to pursue Spirit-empowered victory over their sinful temptations, inclinations, and actions are not qualified for ordained office.”

It sounds good, doesn’t it?  At least for those of us who accept the teaching of Christ that marriage is exclusively between a man and a woman.  And surely it is important that all Christians find their identity in Christ and not in anything else?  Indeed, in today’s world of identity politics the less Christians identify by anything else the better. I too, share the discomfort of those who question why people would want to identify themselves in this way.  Yet I struggle with this Act?

To understand you need to dig a bit deeper.  When you do so you will see that this has more to do with church politics within the PCA, than it does to do with biblical understanding – although the two are often intertwined.  A group called Revoice has a specific mission to “support and encourage gay, lesbian, bisexual, and other same-sex attracted Christians—as well as those who love them—so that all in the Church might be empowered to live in gospel unity while observing the historic Christian doctrine of marriage and sexuality.”   There are some in the PCA who are concerned that this group is just the first step to undermining that historic Christian doctrine.  My concern is that in seeking to deal with this perceived threat they are using a sledgehammer to crack a nut.  Or to put it another way – there is a battle going on and a lot of innocent people are getting hit in the crossfire.

David Bennett, author of A War of Loves and someone who was a former gay activist from Sydney but is now a committed follower of Christ – is one of those who would be banned from becoming a PCA minister – if he so desired!   He was strong in his condemnation of these new rules:

“The Presbyterian Church in America has rejected from its midst those who in a particular way reflect Jesus’ own celibacy and sexual martyrdom, celibate gay or SSA Christians from their midst and from ordination. That is homophobia on steroids.”

He has a point.  The trouble is this act is singling out one particular group.   And it presupposes that people like Sam Alberry, Anne Witton and Ed Shaw of Living Out – https://www.livingout.org seek their primary identity in their sexuality.  They don’t.  Indeed, that is the point.  They are biblical Christians who are seeking to be faithful to Christ and his teaching – and to help others who struggle with the same problems.  The idea that simply by acknowledging that you are SSA, same sex attracted – you are sinning, or seeking your identity in anyone other than Christ, is wrong.  Of course there may be people like that – but then there are heterosexuals like that too.

To be consistent, the PCA would have to legislate against all kinds of self-identified sinners becoming pastors.  Would an alcoholic who attended AA meetings where he/she states ‘I am an alcoholic’ be excluded?  After all the same arguments apply.  You don’t seek your identity in anything other than Christ?  Don’t you realise that Christ cleanses from all sin? Don’t you accept ‘progressive sanctification’ or believe in ‘Spirit empowered victory’?  Surely in admitting you are an alcoholic; you are not endorsing drunkenness. In admitting you are SSA, you are not endorsing sexual immorality.

There are other ways that we identify ourselves.  Should anyone in the PCA who identifies as American be banned from being ordained?  What about churches that fly the American flag in their buildings?  The flag is after all a symbol of an identity that is not de facto Christian!  But being an American is not sinful.  That’s true.  But there is a sinful pride in some nationalism, and a replacement of biblical Christianity with a cultural nationalistic ‘Christianity’ which is far more harmful to the Church, than someone admitting that they are attracted to people of the same sex.    I remember one American missionary giving his testimony to a somewhat bemused Scottish audience – stating ‘I became a Christian and a Republican in the same day’.   When did our identity in Christ and political identity become so intertwined?  Perhaps the PCA should start to deal with that form of seeking identity out with Christ?

What about those who identify as millionaires?  It’s not necessarily sinful to have a lot of money – but we ignore the bible’s teaching that ‘the love of money is a root of all kinds of evil’ at our peril!

And then there is the apostle Paul who at various points identified himself as a Jew, a Roman Citizen or unmarried.  He once even described himself as ‘the chief of sinners.  Did he not understand ‘progressive sanctification’ or ‘Spirit filled victory’?!

Or take those who admit that they are attracted to people of the opposite sex?    I confess to that.  But I also seek to live my life according to the teachings of Christ – that I am to be faithful to my wife, not even to look upon other women lustfully, not to exploit, abuse or even use sexual innuendo.  In today’s sex-obsessed world, with my sinful nature, it’s not always easy to keep oneself pure!    I see my brothers and sisters who are SSA doing the same thing and fighting the same battles – except I suspect that for them it is even harder.   So why does the Church make it even worse?

I have a number of friends in the PCA.  It is a denomination I admire and have spoken in many times.  This new rule will have to be endorsed at next year’s General Assembly before it becomes church law.  My hope and prayer is that the ‘fathers and brethren’ will have a rethink and realise that this is not the way to go.  This matters for those of us outside the American scene, because when the American church sneezes, the church in the rest of the world catches a cold.    We want and need the US church to prosper – but when it engages in the culture wars of its own particular secular culture, I suspect that there will be a lot of straining at gnats and swallowing camels.

We are trying to argue that whilst we uphold, love and practice biblical teaching on sex and sexuality – we are not homophobic and seek to be welcoming to all. When churches take actions like this, they provide ammunition for our enemies (whom we love) and make our task more difficult than it already is.    I have a great admiration for those Christians I know who struggle with their sexuality.  They are my brothers and sisters.  I am honoured to serve alongside with them.  We are together in our relationship in Christ.  Why would we want to divide the body of Christ on the basis of sexuality?   Is that not itself ‘identity politics’?

I found this discussion with Tim Keller and Kevin De Young very helpful….

For a different perspective  read this from Todd Pruitt on Reformation 21 https://www.reformation21.org/blog/a-clear-message-from-the-48th-general-assembly-of-the-pca

What I find fascinating in this is the greatly increased attendance at the PCA Assembly because of this and one other issue.  If that is true it is somewhat disturbing.  Would such passion and interest be shown if they were discussing evangelism?   Also if that is the position of Reformation 21 and the PCA – I guess that’s my invite to speak at PCA churches gone – not that there were lots of them!

See you next week – if I can get my act together!

Yours in Christ (and in lockdown).

Letter from Australia 96 – An Encouraging Funeral, a Tribute, a Shetland Pony, Guns, the Sabbath and Prophecies