After last weeks guide I am going to make a much shorter report because I want to share with you my article on this subject in December’s Evangelicals Now.

In terms of polling this week has been a good week for the Tories , a poor week for Labour (although their poll numbers are holding up), a worrying week for the SNP (with the Tory vote rising 7% and the backlash against Boris in SCOTLAND not happening), and a disastrous week for the Lib Dems – who lurch from bad to worse.  I have just watched Andrew Neil make mincement of both Nicola Sturgeon and Jeremy Corbyn…Sturgeons was bad…but Corbyn’s was even worse than Prince Andrew’s!

It’s interesting that at the time of writing, Labour have played their big card in a somewhat desperate attempt to retrieve the situation…they are claiming to have 451 pages of redacted documents which show the NHS is up for sale.  These documents don’t show that.https://www.bbc.co.uk/news/uk-50266347   (at most they show that US health companies want to make money out of selling their medicines – what a surprise!  But they do not show that the UK government plans to go along with this – or sell the NHS)…but people will believe what they want to believe so the tactic may work.

As a footnote to this – Corbyn claimed that the documents stated in his debate with Johnson (he said he was quoting verbatim) that the negotiatons were about ‘full market access to our NHS).  The only problem is that these words are not in those documents.  He was lying.

Here is the EN Article: 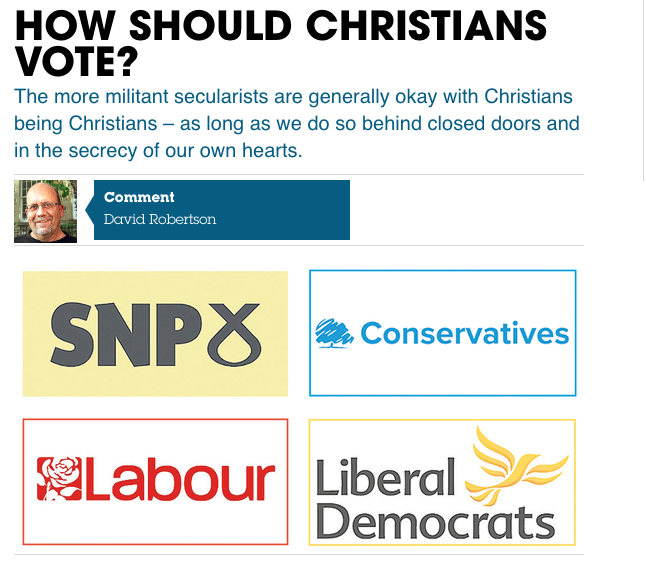 In other words they want us to be a private society or club, like a line-dancing society or a golf club. But our Christianity is not just a hobby, and the church is not a club. That is also true when it comes to politics. This month we have a general election – and some want to ask what is the Christian position.

‘Pastor, how should I vote?’

As a minister I have occasionally been asked by someone in the congregation how I think they should vote. I tell them that that is not my job – and nor should they be asking me. I can give general biblical guidelines but it would be the wrong use of my position as a pastor for me to tell my congregation how to vote, or to endorse any particular political party or candidate. Bringing party politics into the church is just simply wrong.

This is one area where the church in the US has gone wrong. President Trump seeks and is given the endorsement of ‘evangelical’ leaders such as Franklin Graham and his new ‘spiritual advisor’, Paula White. Other clergy with a different political viewpoint will use their position to endorse the Democratic candidate. Asking people to vote for particular political parties has moved a long way from Paul’s injunction to Timothy that we should pray for kings and those in authority (1 Tim. 2:1-2).

But does that mean we should say nothing? As a private citizen I have my own views and I am happy to share them, in the sure and certain knowledge that I do not speak ex cathedra, and my views carry no extra weight just because of my role as a pastor. In that regard, let me offer some personal reflections about the current UK political situation, and the struggle I am having in deciding how to cast my vote.

I am Scottish and have for some time supported the notion of Scottish Independence. Therefore I would normally vote for the SNP. But their regressive policies and their increasingly authoritarian government and style have made me reconsider. Could I in all conscience vote for a party that broke its own rule on interfering in other countries devolved parliaments just to impose abortion on Northern Ireland?

I once belonged to the Labour Party and was even the student publicity secretary in my time at Edinburgh University. I recall the days when Jeremy Corbyn was a young pro-IRA fanatic. I know that we do not have a presidential system, but the fact still remains that in voting for a Labour candidate my vote would be taken as an endorsement of Corbyn and anti-Semitism.

So maybe I would vote for the Tories? Unlike many of my countrymen I would not regard that as the unforgiveable sin, and indeed have also voted Tory in the past. I believe that whatever one’s views on Brexit, the result of the 2016 referendum has to be honoured if democracy is to survive, so I would be inclined to support them on that issue. But there are other issues that are disturbing – not least the character and general liberal regressivism of their leader.

Which leads me to another party I once belonged to – indeed was a founder member of – the Lib Dems (I belonged to the Dem part – the SDP). Their extremist position on Europe, transgenderism and most social issues, makes voting for a Lib Dem just as difficult as the others.

The Greens are too Green. The Brexit Party don’t have a manifesto. And there are no independents standing in my constituency, nor any of the tiny ‘Christian’ parties. Even if there were, I am not sure I would vote for them – precisely because the term Christian cannot be tied to any one political party or set of policies.

For someone who believes that it would be wrong of me not to use my vote it is a pretty difficult decision. It may be that I just look at the individual candidates in my constituency and vote for the least bad option – or it may be that I register a protest vote by writing ‘none of the above’ and therefore my vote will be recorded as a spoilt ballot. Who will deliver me from this electoral dilemma – one that I suspect is shared by many.

All I can encourage people to do is think for themselves, read the party manifestos and find out about local candidates. Above all we must pray. And perhaps some Christians will feel inspired to get more involved in politics so that the field is not just left to those who ignore or despise the word of God. And of course – above all we must pray.

Sometimes we have a lot to learn from the wisdom of the past. John Wesley gave the following wise advice, recorded in The Journal of John Wesley:

‘October 6, 1774. I met those of our society who had votes in the ensuing election, and advised them:

1. To vote, without fee or reward, for the person they judged most worthy.

2. To speak no evil of the person they voted against, and

3. To take care their spirits were not sharpened against those that voted on the other side.’