Well that was depressing. The Great Election Debate was about as exciting as the Scotland football match…still after the great snore (spoiled by ITV’s format and an incompetent moderator), it at least helped us to see the poor quality of the choice we have. 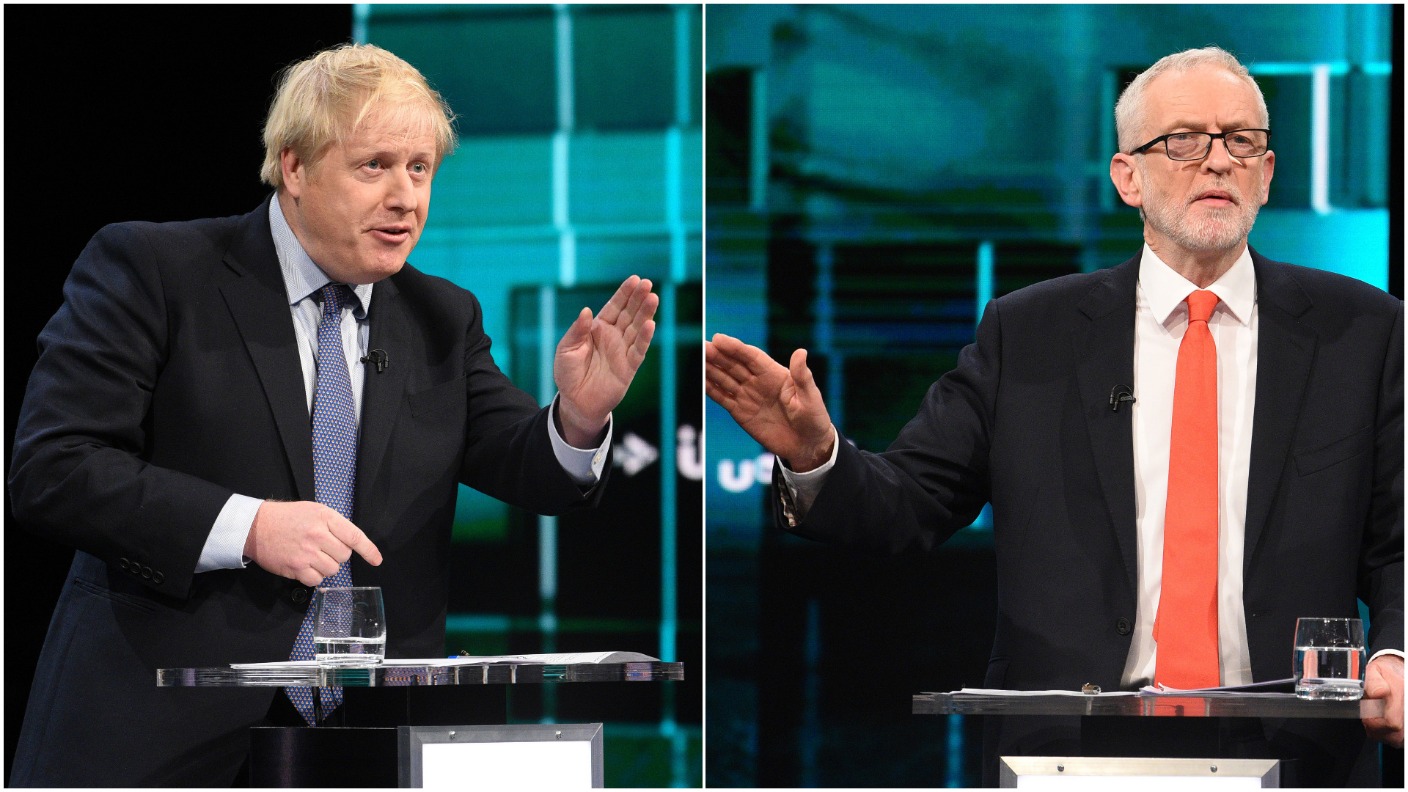 The Lib Dems: Their campaign seems to be imploding.   Jo Swinson is getting negative ratings and even Remain supporters are not convinced by their somewhat extreme Revoke Article 50 stance. Their stance on Tran issues is also losing them feminists and social conservatives.   They are undermining and attacking womens rights.

This from their manifesto:

Complete reform of the Gender Recognition Act to remove the requirement for medical reports, scrap the fee and recognise non-binary gender identities.
Introduce an ‘X’ gender option on passports and extend equality law to cover gender identity and expression.

And if you doubted the Liberals illiberal authoritarian tendencies this sums it up: 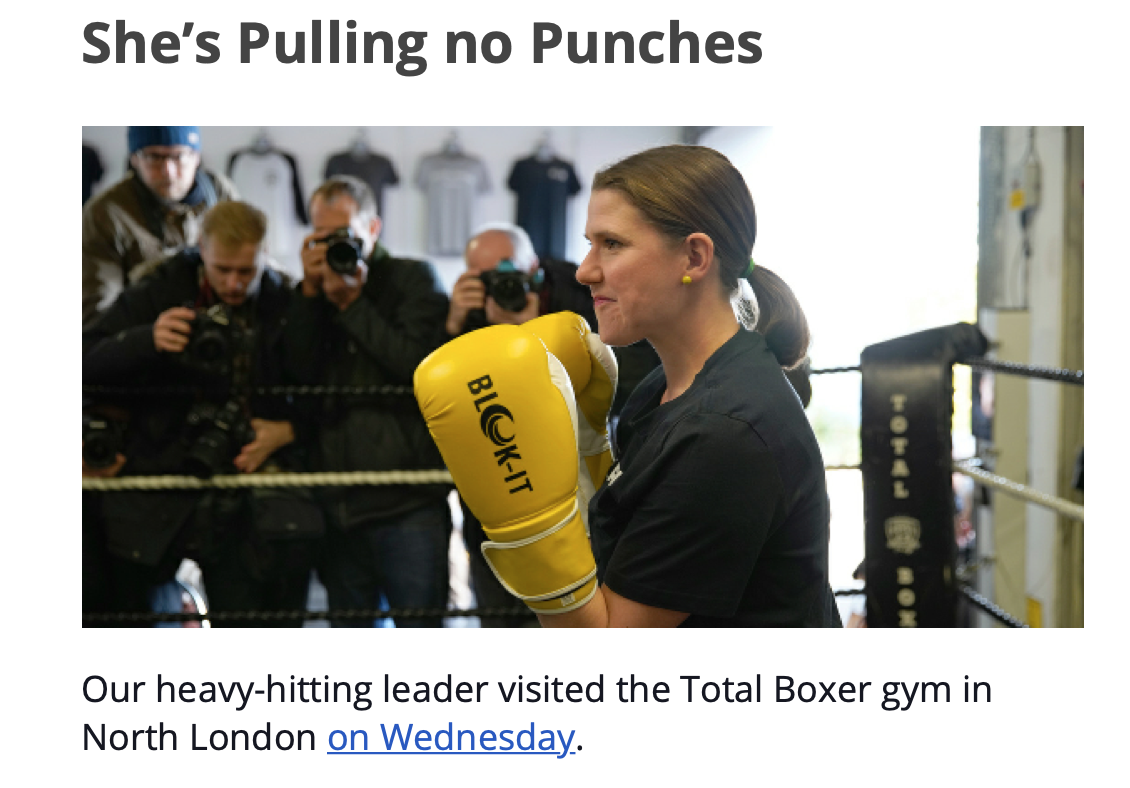 Their manifesto is entitled ‘Jo’s Plan for the Future” – as though Jo Swinson were some kind of dynamic Guru leader.  Its a dystopian vision of the future from a party led by someone who doesn’t have a clue.

The Lib Dems have in effect told Christians not to vote for them.  They even removed one of their candidates Rob Flello (ex Labour MP) because of his views on abortion and SSM. “His values differ greatly from ours”.    How can any Christian vote for a party which does not even permit disagreement on these issues?  Rob Flello is a practising Catholic.  In effect the Lib Dems are banning Catholics who hold to Catholic doctrine.

Labour: This week started well for Labour with them coming up with a headline grabbing policy – free nationalized broadband for all. But this quickly backfired. “BT chief executive Philip Jansen told BBC that Labour had under-estimated the price of its pledge – with a price tag closer to £40 billion. The chief executive of TechUK – which represents many British firms – went further, describing the proposals as a ‘disaster for the telecoms sector and the customers that it serves’.  The worst thing about this proposal is not the cost but the danger that it would lead to State control over the Internet and the inevitable banning and censorship of those who didn’t follow the ‘values’ of those in power. 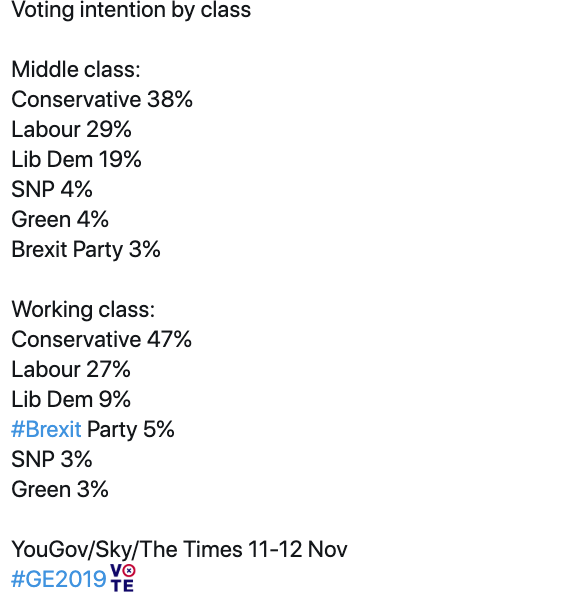 Labour are by no means out of it and could yet win but they really need their manifesto to give them a boost. This time before the last election they were in a similar bad position – but they almost recovered.

The Brexit Party:  Whose poll ratings continue to slump and whose candidates seem to be falling out with themselves.

The People’s Vote:   The campaign for a second referendum is in disarray – with in fighting and bitter public recriminations.  The only way that they will now get their way is if Labour are elected.

Comedians – who are complaining that outside London – when they do their usual herd anti-Brexit routine, people are getting up and walking out! Aaron Brown, editor of the British Comedy Guide, said: “I consume a lot of comedy – mostly TV, also some live – and would say the comedy world’s reaction has been almost exclusively negative.

“Many jokes essentially paraphrase as ‘shooting ourselves in the foot’, and the rest rely on lazily branding 52 per cent of the voters as racist.” https://www.telegraph.co.uk/news/2017/04/04/comedians-tell-anti-brexit-jokes-damaging-careersas-audiences/

Its Been a Good Week For..

The SNP – They didn’t have to participate in that dreadful ‘debate’ so they won it.  Their tactic appears to be to keep Ian Blackford (who is standing) as out of the limelight as possible, and keep Nicola Sturgeon (who isn’t) in.  She comes across really well.   And their poll ratings continue high.  It appears in Scotland that the anti-Tory mantra continues to bear fruit for the SNP.  ‘We are Scotland….and We hate the Tories” may be dumbed down sloganeering but it seems to work.   Besides which the SNP have a formidable electioneering machine and a tight party discipline (until the Salmond/Sturgeon civil war breaks out in court next January).  They also have a fairly supine press and a political and academic and estabalishment which is reluctant to challenge them.  Even the Church is scared to speak ‘truth to power’.

There was an interesting letter from a Professor in the press this past week, which exposed the hypocrisy of the SNP in complaining about American medical firms being allowed to work in the NHS.  But for their supporters the SNP seem like Teflon – nothing sticks.. 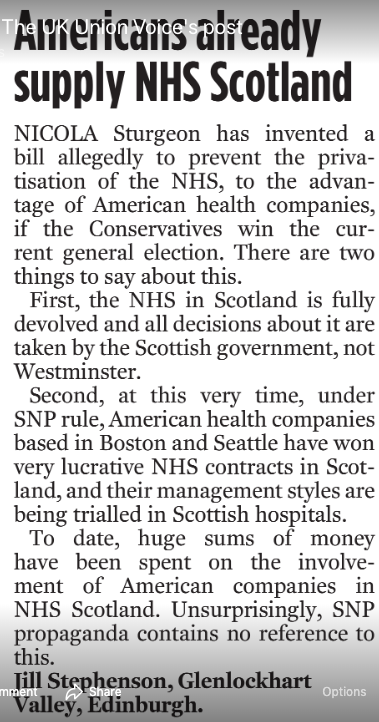 As regards the NHS Labour have also run into trouble.  They have proposed a complusory four day working week.  The NHS – as the biggest employer in the UK – stated that this would severely damage them.  Labour then announced that this would not apply to the NHS!  And then there was this ludicrous tweet from Corbyn:

Why is that tweet ludicrous?  The £500 million per week to US drug companies is a nonsensical figure plucked out of thin air. The NHS spends £17.4 billion per year on drugs. Corbyn’s figure means it would be £26 billion on US drugs alone.

The Conservatives –  Who despite some more campaign mistakes have managed to retain and even increase their lead in the polls.  Their biggest risk is the NHS – figures came out this week which showed some of the growing crisis within it.  If the public believe that it is all the fault of the Tories and that Labour can fix it – then Labour could win – as the NHS is the nearest thing to a religion that many UK citizens have.  To touch or criticise it is blasphemy!

The Christian Institute – who provided their election briefing – https://www.christian.org.uk/wp-content/uploads/election-briefing-2019.pdf

So things are not getting any better or clearer….

PS. I think I found someone I could vote for – despite the fact he is a former Communist and a lecturer at Abertay University!  The only problem is that he is standing in Dundee West, not East.   But I really liked Stuart Waiton’s statement below:

STUART WAITON STARTS HIS CAMPAIGN FOR BREXIT AND DEMOCRACY

The People versus the New Snobs. There is a growing and clear divide between the new political class and the public. Rather than represent the mass of people and their interest, politicians have grown used to developing laws and initiatives that tell us how to behave. Often with a pretence of progress and of being ‘caring’, the new snobs have developed a range of policies, from booze bans to anti-smacking laws that treat the public like incompetents and criminals.

Their reaction to the Brexit vote has been eye-openingly contemptuous. For these new kindly snobs, who often speak with regional accents and denounce elitism, the vote to leave the EU came as a shock. Imagine the little people not doing what they were told by all the major political parties, world leaders and institutions. The outrage came flooding out. The little people are too stupid to understand. They’re racist! They’re bigots! Some even looked forward to older generations dying out so that a new “People’s Vote” could take place. (How stupid do they think we are?). Like the EU before them, our own class of snobs understood at once that the way to true democracy is to have more votes, as many as it takes until the right decision is made.

This contemptuous attitude should come as no surprise. For decades a new elite has grown up in the corridors of power, developing a disconnected understanding of the world with like-minded lawyers, bureaucrats and professionals. Of course you can speak freely, they tell us, just so long as you don’t say things we don’t want to hear. Diversity is great but not a diversity of opinions.

Despite the UK being one of the most tolerant countries in the world, the new snobs presume that we are bigots. They presume that immigration policies need to be developed behind our backs. Raise a question about immigration and you’ll be dismissed as a bigot, or as ‘just a bigoted woman’, as Gordon Brown described Gillian Duffy.

Of course you can raise your children as you see fit, they tell us. Just so long as you listen to your named person and understand that a light smack is a form of child abuse. The lightest smack of a child is now a criminal offence. The aloof political class see abuse where there is none and see criminality rather than ordinary parents who love their children. They speak with jargon from another planet, legalistic talk of rights and a perverse talk of ‘violence’ as they confuse what it means to be a child and an adult.

Fancy a drink? Well, make sure you ‘drink responsibly’. In case you don’t get it, we’ll pop the price of drink up just to make sure. The little people can’t really be trusted with booze you understand. Oh, and best hide those cigarettes. The shiny packs will be too much of a temptation. But forget the booze. Let’s have a soft drink. What about an Irn Bru? The sugar tax should take care of that. Unfortunately for Barr, having halved the amount of sugar, the sales of Irn Bru have collapsed, shares have dropped by 45 percent, all because they thought they could get away with giving us what we are supposed to want rather than what we actually want.

The SNP of course have been at the forefront of many of these new developments. Wrapped in the Saltire, they get away with their patronising view of people by chanting ‘Westminster’. Behind closed doors however, they sit holding hands with their supposed enemies and pass new laws and regulations that reflect their true selves and their fear and loathing of the electorate.

Having lost the vote for independence, the Brexit vote should have been respected by this and every other political party. The Scottish people voted to remain in the UK. The Brexit vote was a UK vote. The vote should stand across Britain. To deny this vote is to reject the Scottish people’s vote against independence and then to stand against the democratic will of the British people. Democracy is on trial in this election. It is being undermined by a contemptuous political class who look down their noses at ordinary people. The new snobs live on another planet to the rest of us and need to be sent packing. Dr Stuart Waiton is standing for the Brexit Party in Dundee West. stuart.waiton@thebrexitparty.org