Although its readers were to name him one of the top three intellectuals in the world, Prospect magazine gave a scathing review to Richard Dawkins’ anti-religion polemic The God Delusion, writing at the time, “It has been obvious for years that Richard Dawkins had a fat book on religion in him, but who would have thought him capable of writing one this bad? Incurious, dogmatic, rambling and self-contradictory, it has none of the style or verve of his earlier works.” That did not stop TGD becoming a multi-million copy bestseller. 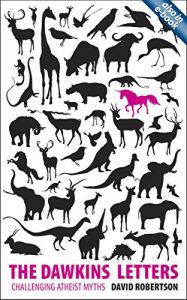 and others to proclaim the Good News of Jesus to tens of thousands who would not have heard it otherwise. In fact, I have met more people who were converted to Christ through Dawkins, than have been converted to atheism. I wrote a book called The Dawkins Letters, which the Lord still continues to use.

There was however a down side to this – the level of vitriol from what I came to recognise as the New Fundamentalist Atheists, was at times overwhelming – something which rather sadly was encouraged by Dawkins with his mocking and sneering tone. And the arguments Dawkins used (largely borrowed from previous atheists such as Bertrand Russell) although simplistic and naïve, were repeated ad nauseum in schools and through the secular media. 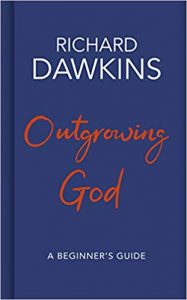 Which brings us on to Outgrowing God: A Beginners Guide, Dawkins latest book, published on September 19. It is designed for young people so I was interested and intrigued by what he would say. Had his argument developed? Would he have taken account of the weaknesses? Would he be able to explain and discuss in such a way that young people could grasp and think for themselves?

The arguments he uses are just a rehash of those in TGD, as are many of the illustrations and stories. So we have all the old ones – atheists just worship one god less; evolution proves there is no God; you don’t need God for morality; and of course the oldie but goldie, ‘who created God, then?’.

He’s even got the same old stories and illustrations – the cargo cult, the universe where you have a green moustache, the (mis) citation of Hitler etc.

Dawkins pontificates as though he were an expert in subjects which he knows very little about. Space does not permit me to list all the subtle and howling errors. But here are a few of the simplistic lowlights.

People worship Jesus all over the world today because of a historical accident in AD 312; the Trinity is polytheistic. Paul says virtually nothing about the life of Jesus. Until now nobody doubted the Gospels. Revelation was the inspiration for the doctrine of the rapture. There is little or no evidence for the existence of Abraham, David, Moses and perhaps Jesus didn’t even exist. If he did, he may have said some cool things but he really was not nice.

Dawkins does strain at gnats while swallowing camels. He is so desperate to disprove the Bible that he will grab any bit of confirmation bias he can. He confidently asserts knowledge he does not have. One example is his claim that Abraham could not have existed when Genesis said he did (2nd millennium BC) because camels (mentioned in Genesis) were not domesticated until hundreds of years afterwards – and yet we have evidence of camels being used in the 3rd millennium BC.

If you want to understand how Dawkins works, take this example: “No serious scholar today thinks that the Gospels were written by eye-witnesses.”

Here you need to grasp how Dawkins uses language. “Serious scholar” means ‘someone who agrees with me’. If they don’t they obviously can be neither serious nor a scholar. Which is why he can dismiss, if he even knows about, Professor Richard Bauckham of the University of St Andrews, whose serious scholarly work Jesus and the Eyewitness is an authoritative piece of academic research.

Likewise when Dawkins confidently asserts that no “educated theologian” believes that Adam and Eve, or Noah is history. But I’m educated (two degrees) and I’m a theologian, and I believe they are history. I may be wrong. But Dawkins’ simplistic Emperor’s clothes attitude – ‘any intelligent person will see that the Emperor is wearing the finest clothes’ – is easily exposed.

One of my favourites is his repeated argument that there is very little about Jesus in the contemporary written histories of the first century. Why should there be? Jesus was a Jewish peasant on the fringes of the Empire who died an ignominious but not uncommon death. Why would any contemporary historian write about him?

Or how about this: “‘Isn’t it remarkable that almost every child follows the same religion as their parents, and it always just happens to be the right religion!” Dawkins misses out the rather obvious point that this is also true for secular atheists – whose children happen to follow their position – which remarkably happens to be just the right position!

Then there is the unlikely anecdotal hearsay evidence that he uses, for example, when he asserts that when he asks Christians what the Ten Commandments are, they can only remember one – ‘thou shalt not kill’. Either his Christian acquaintances are extremely limited or he’s not telling the truth. Most of us can remember about not stealing, committing adultery, keeping the Sabbath, etc.

He is also not averse to twisting the Bible to make it mean what he wants it to mean: “What the Sixth Commandment originally meant was ‘Thou shalt not kill members of thine own tribe.'”

But it’s not just in his attempt to diss the Bible that Dawkins shows both illogicality and a lack of knowledge. It’s also when he asserts his own faith. To him evolution is much more than a scientific theory that explains how life develops – it is the theory of everything. It proves that things are getting better – including wars, human morality and the world in general.

Whilst mocking the God of the gaps argument (an argument that we do not use) he sets up his own blind faith – the science of the gaps. We don’t know but one day science will be able to explain (and sort) everything. He believes so passionately that science and Christianity are opposed that he cannot seem to comprehend the many Christians who are scientists.

One area where I was surprised was his argument for abortion:“You can define a fertilized egg as a human being if you like. But it doesn’t have a nervous system, so it can’t suffer. It doesn’t know it’s been aborted, feels no fear or regret. A woman has a nervous system.”

If Dawkins were being consistent and logical, this would mean that he is opposed to all abortion after a few weeks – when the baby does have a nervous system.

He is hopelessly all over the place with morality.  On the one hand, he argues that the universe has no moral properties, and that there should be no lines and boundaries. On the other, he argues against the “immorality” of the Bible and for the absolutist belief that “causing suffering is wrong” – unless of course it is the suffering of the unborn child, or the Christian who is refused the right to educate their child according to their faith.

In summary, all I can say is that he’s done it again. Richard Dawkins has managed to produce a book on theology, history, philosophy, ethics and science that is even worse than his first.

Outgrowing God is a dumbed down version of TGD, which itself was a dumbed down version of more classical atheist arguments. Apart from the half of the book that is about evolution and where the writing is at times beautiful and often informative, it is poorly written, badly researched and relies on ridicule and ad hominem rather than rational and intelligent discussion.

Dawkins wants to assure us that the atheist emperor is covered in a fine robe of scientific rationalism. He argues that those who do not see this are ‘uneducated’ and to be frank, quite thick. Of course there are those in the fawning interviews and book reviews who will declare that the emperor is fully clothed and in his right mind. But his book only demonstrates that the emperor is naked.

The childish arguments and sneering mockery only show his inability to see beyond his own prejudices and preconceptions. It’s time for him to outgrow his atheism and mature in his thinking. If our society follows the philosophy and faith of Dawkins we will be heading into a dark abyss. It’s time for another Christian Enlightenment.

PS.  If you want a book for teenagers then I would suggest this one instead!