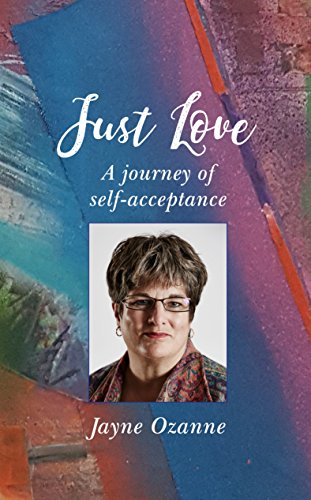 ITV news is at it again.  Presenting a one-sided piece of ‘news’ which is in reality propaganda – with no attempt at any kind of balance.   Look at the video  in the link which treats those who believe that someone might change their sexuality (something which has demonstrably happened) as being almost equivalent to terrorists – or at the very least heretics against the new morality. Vicky Beeching could not resist tweeting her delight at this.  Which reminded me about a new book I read a couple of weeks ago.

Jayne Ozanne is a part of the Anglican Establishment and a relatively well known evangelical in the Vicky Beeching mode.  She came to my attention through the work of CCPAS (read about the danger this organisation poses here ) and so I was interested in her autobiography – Just Love – A Journey of Self-Acceptance.  It was very similar to Vicky’s Undivided – and therefore carries the same health warning!  Its the same emotive story, the same irrational arguments and the same twisted theology.

This was such a depressing read about a woman from a privileged position seeking for identity, love and relationships.  Perhaps the saddest bit was where she recounted being raped by an Anglican priest.  There is the now familiar story of how she sought to be delivered from ‘homosexual’ demons.

In this review lets reflect upon some of her own statements which indicate the wrong teaching that is a key part of this ‘progressive’ theology move away from Christianity.

1)  This new theology  has a Fundamentalist certainty.

Jayne claims that it is God who ‘changed my heart and mind’.  This is part of both the certainty and the blasphemy of this new theology.  God got it wrong in his word but he is now correcting his mistakes through Jayne, Vicky, Steve and other progressives who have discovered that God really wants what our culture wants.

There is also a remarkable certainty about their own spirituality – I can honestly say I cannot remember a time when I wasn’t aware of the presence of Jesus. How amazingly fortunate is that?!   And yet there is so little of Christ in this book.  Jayne finds that this constant sense of the presence of Christ (would that I had that!) does not bring her true, joy, peace and happiness.

Apparently no matter what we are – it is God who is to blame.  He made us this way. I remember hearing John Bell from the Iona Community say, ‘If being gay is so wrong, why does God keep making gay people?’ Sexuality is an integral part of our created being, whether heterosexual or homosexual or somewhere in between.

What if someone who was promiscuous was to argue ‘if being promiscuous is so wrong, why did God make me this way?”.

3) The new theology uses the word love without ever being able to tell us what is means.

I could respond in love to any situation that I was in, because God IS love. It really is just that simple. We are called to JUST LOVE – no matter who, no matter where, no matter how, no matter why. JUST LOVE! That’s all. The rest is up to God.

Just love.  It sounds so sweet.  It sounds so nice.  It sounds so lovely.  And it is utterly meaningless waffle.  Love is love.  But what is love?  Lets ask him…”this is love for God, to keep his commands”  (1 John5:3) ” This is love: not that we loved God, but that he loved us and sent his Son as an atoning sacrifice for our sins. (1 John 4:10).

Jayne describes how in her relationship with ‘Geoff’, a non-Christian, she decided to  ” throw caution to the wind and sought out the views on ‘sex before marriage’ from a close Christian couple who I respected, and who I knew had slept together before they themselves had got married. After a couple of long talks, I decided that there was a theological case for it being permissible if we were truly ‘committed to each other’. I immediately rang Geoff and asked if I could come over as I wanted to spend the night with him. He was stunned but delighted.”

5) The new theology relies on feeling –

Yes, I might have recognised in my head that certain guys were desirable, that they were good intellectual or spiritual matches for me, but I had not felt this level of physical attraction before. It was as if I had been hit by a bus – such an overwhelming feeling, which was totally beyond my control. Unexpected and uninvited.

6) The new theology looks for its satisfaction in something other than Christ.

By this time, I was racked by one particular question that kept haunting me through my lonely evenings at home and my long days of solitude in the library: ‘Would what I desire give me the happiness I longed for, or was it a sandcastle that would disintegrate the moment I touched it?’ In other words, was what I longed and craved for – intimacy with a woman – a false desire? Was it purely a thought that had been sent to torment me and cause me great anguish; if I ever finally acted on it, would I then find myself hating it? Or was it something that I would find fulfilling and life-giving, which would bring me great joy and peace – even if it was forbidden fruit? I so desperately wanted to know the answer to this, and yet the cost of trying to find out was so exceptionally high. I began to think I just needed ‘one experience’ that would help me to know the truth. I believed it would at least bring me some peace as I would finally know the answer to who I am. But how could I find out?

Jayne later records how she found the true peace and happiness in a relationship.  Although it too was a relationship that did not work out.

7) The new theology redefines sin and has a loose attitude towards traditional biblical morality.

It is astounding that Jayne then records how as an ‘evangelical’ Christian she went out to explore  ” The Village District, hoping to find a lesbian bar where I might try and meet someone. ”  Never mind the sexuality aspect – heterosexual or homosexual does not matter – it’s never right to seek to pick up someone in order to use them for a sexual experience in order to ‘find yourself’.

The important thing is that we’ve owned our truth, and we are no longer having to hide. You see – the truth will always set us free. However, once the truth is out, then people have a choice that only they can make.

The truth will set us free.  Jesus is the truth.  But for Jayne the truth is the ‘truth’ about ourselves, not the truth of Christ.

9) The new theology hates the church .

The church gets blamed for everything.  Especially any church which seeks to remain faithful to the Jesus of the Bible and the Bible of Jesus.

Eventually we just gave up going anywhere, and I found myself becoming increasingly weary and cynical of anything to do with church. It seemed to be the source of such pain and division, and quite frankly I’d had enough. There was part of me that wondered if Jesus was still going too.

10) The new theology is very friendly with the ‘world’

Later that Saturday evening I found myself speaking on Radio 5 Live, having rung in to offer my own thoughts and experiences about coming out as a gay evangelical.

Within the year I found myself being elected back onto General Synod, and by January 2016 I had launched a campaign to secure an apology to the LGBTI community for the pain and hurt caused by the Church of England, which the Archbishop of Canterbury personally gave in front of the world’s media at the 2016 Primates Meeting.

Jayne, like her ally Vicky, clearly sees herself as on some kind of campaign and mission.  And of course ITV, the BBC, the printed press and virtually all of the secular media cannot get enough of them.  They so fit the cultural narrative which allows the secular media to attack the church whilst praising themselves.

This is not just a campaign for an acceptance of them or their views – but a campaign to exclude all other views.   Hence the attack on all forms of ‘conversion therapy’ (including prayer)  and their wholescale adoption of contemporary liberal sexual philosophy.  Today for example Vicky boasted:

MoreI’m on @BBCRadioKent now – I’ll be arguing that whatever age children are first taught about ‘models of family’ in school curriculum, same-sex couples and LGBTQ identities can also be introduced as equally valid. This will help break down any taboo & stigma.

What matters for these mixed up ‘Christians’  is not Christ or our identity in him – but their sexual identity.  To defend their new theology and their new identities they are prepared to go to great lengths to attack the church and those who remain faithful to Christ.  This is where Jayne will use CCPAS and try to get government funding so that she and her colleagues can be appointed the defenders against ”spiritual abuse’.
But there is another story….one that is reflected in another book I reviewed – Jackie Perry’s, Gay Girl, Good God and a new book that I have just started reading – David Bennett’s War of Loves.

At 14, David Bennett came out to his parents.
At 19, he encountered Jesus Christ.
At that moment, his life changed forever.

As a young gay man, David Bennett saw Christianity as an enemy to freedom for LGBTQI people, and his early experiences with prejudice and homophobia led him to become a gay activist. But when Jesus came into his life in a highly unexpected way, he was led down a path he never would have predicted or imagined.

In A War of Loves, David recounts his dramatic story, from his early years exploring new age religions and French existentialism to his university experiences as an activist. Following supernatural encounters with God, he embarked on a journey not only of seeking to reconcile his faith and sexuality but also of discovering the higher call of Jesus Christ.

A War of Loves investigates what the Bible teaches about sexuality and demonstrates the profligate, unqualified grace of God for all people. David describes the joy and intimacy he found in following Jesus Christ and how love has taken on a radically new and far richer meaning for him.