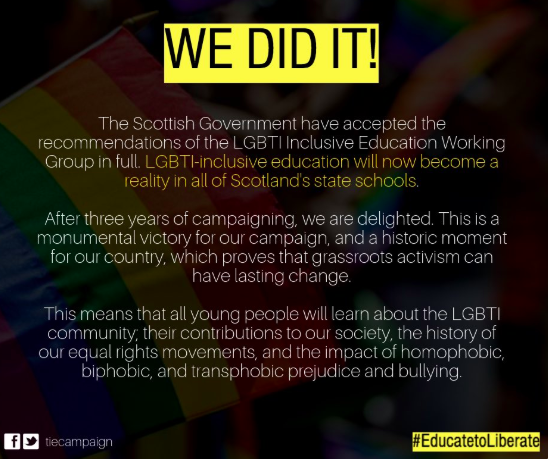 Last week the Scottish government passed an act which will ensure that LGBTI ‘inclusive’ education will be taught in every school and in every subject.  This is something that was rejected by that same government a couple of years ago – but now apparently every politician thinks it is a good thing.  This is because, with the exception of a handful like Patrick Harvie – they do not know what they are doing.  They have bought into a very shallow Theresa May like ‘we don’t want to be the nasty party’ ideology and do not understand what they are letting into our schools – under the guise of the worthy aim of preventing bullying and ‘letting people be who they are’.  Either that or they just don’t have the courage and stamina to challenge what seems an unwinnable battle.

Notice the chilling ‘educate to liberate’.  The Scottish Government is becoming more and more Orwellian in its use of language.  They have moved from a position of not thinking this was necessary at all to it becoming, within a couple of years, State mandated doctrine – into which we must all be ‘educated’.   We cannot be set free – we cannot be ‘liberated’ without going through this education.  I wonder if the time will come when those of us who don’t bow down to the new State imposed dogma and are not silenced by the mockery, abuse and threats – find ourselves being sent to the 21st Century equivalent of ‘re-education’ centres.

Not all of us bow the knee though.  On Friday I had a fascinating day. discussing this…I was asked to appear on the Stephen Jardine show on BBC Radio Scotland.  It was a bit of a set up – I was interviewed and then afterwards two people who were strongly for TIE (‘the experts’ ), were interviewed and I was given no opportunity to respond.  You can listen to it here.  The fascinating thing is that both ‘experts’ seem to live in some kind of bubble where they never meet anyone who disagrees with their position.  The first said that in the whole of Scotland it was just me and one of two others (yet an online poll in the Scotsman showed 80% opposed to this) and that I belonged to another century.  The educational ‘expert’ refused to discuss awkward facts like biology but instead informed us that we all had an ‘equal amount of love’ and that she had never come across any parent who objected to their children being taught transgenderism.  These people live in a bubble where they demonise everyone outside and where facts and reality are rarely allowed to intrude.

‘Co-incidentally’ I had a meeting after this programme with a young woman who has her own experience of the harm and hatred caused by this agenda.  This is not something that the BBC would ever cover, nor is it something that the Scottish Government or indeed any of our politicians will bring up (because in their somewhat simplistic world they operate on the basis of the ideology of the machine – not the reality of people).  For reasons which will become painfully obvious the following article is anonymous….read and weep. (Note;  This article is as I received it – unedited with one exception – there was one tweet included that had such vile language that I had to edit it slightly and replace a couple of words with XXXX )

Above all else, human. After that, however, I can be a lot of things. A writer, an artist, a student… a girl. I haven’t always been happy about that biological reality, however, and there was a time where I would have gone to extreme lengths to hide it.

Why am I writing this?

I met with David recently because I’d been inspired by his blog. To see someone so outspoken about the issue of gender was a blessing, in a world where we tip-toe around it so softly, throwing ourselves onto the chopping block if we even slightly offend the trans community. His writing and podcasts got me thinking about my own story, a story that has burned inside me for a while, begging to be told. A story I cannot tell through my own means.

I identified as transgender for a few years, and became active in the online community between the ages of 14 and 16. For personal reasons, I no longer wanted to be identified as a transgender boy, but rather to reclaim my girlhood – and later, my womanhood. The trans community took offense to this. For weeks after announcing my plans to detransition, I was plagued with rape threats, death threats, bullying and horrific sexual harassment. It was for this reason I locked down my social media accounts, changed my name back to my birth name, and in general lived a more sheltered life.

Even though I still at that time considered myself to belong in the category of LGBT people, and was a girl, two groups the Queer community claims to vehemently support, I was effectively an outcast. Not a “real” feminist, because my feminism was critical of… well, men. Not a “real” lesbian, because my attraction excluded… men.

So I’m choosing to express my thoughts and reflection through David, who has graciously agreed to let me take up space on his blog. I am sure he gets enough grief from activists from his own work, let alone by allowing an ex-trans person to voice an opinion.

We agreed to share my story through the format of a mini-series on the blog, We’re unsure how many posts this will take, or even what’s safe to talk about. But we’ll work it out. All voices need to be heard, and all sides of the transgender world need to be exposed, even the views that show the community in a less than favourable light.

My first post will be about the darker side of activism.

Most abuse is hidden. You have to dig down deep to see it, or you must simply wait until a victim raises the red flag. Surprisingly, this is not the case when it comes to the bullying and abuse headed by trans activists. All it takes is a simple twitter search to see abhorrent and vile misogyny. And yes, it is misogyny. Men are far less likely to be attacked by trans activists than women, and lesbian women far more likely than straight women. Twitter unveils a plethora of evidence showing trans activists threatening even the most vulnerable of women.

One such example from ‘smol cute girl’ read “Terf twitter and transphone twitter can go die. Choke on this tranny…xxxx…you xxxx”

These words of wisdom from “smol cute girl” really underline the femininity and absolute love that trans activists have for women and girls.

“TERF” means trans exclusionary radical feminist, in other words a woman who recognizes the undeniable sex characteristics of other women, i.e. a uterus and xx chromosomes.

However, the “RF” part of “TERF” has been lost in translation down the years, with everyone from Germaine Greer (arguably a TERF in linguistic terms), to Donald Trump (who is far from what anyone would vall a feminist). What this fundamentally shows is that everyone who disagrees with transgender ideology is the worst thing you can ever be – a woman.

It boggles the mind that these people want to become the opposite sex, but very rarely speak kindly of the sex they are trying to assume the identity of.

These activists demand unconditional love and acceptance from women, and a lot of emotional labour, and this is how they treat the women who don’t comply – with hatred. They want to rape us, mutilate our bodies, feed us to animals.

When I detransitioned myself, one of the people who used to call me a friend told my mother they wanted to rape my mouth. I was sixteen years old. Another person told me I should die for my views, and that I was no longer welcome in any part of the community.

I don’t want my family to be exposed again to the kind of judgement and hatred I was subjected to as a child in the trans community – and this is why I, and many other women stay anonymous when writing their opinions about gender. It’s literally a matter of life and death.

Finally, I’d like to say thank you to David for allowing me to have a platform on his blog. I’d like to thank his readers for their time and patience in reading someone else’s words.

I welcome debate from any commenters, but abuse will never be tolerated and will be reported to police if serious enough.

I hope to return soon with another topic relating to my journey through queer theory and trans identity.

This is my response:

Thanks so much for this…it was great to meet with you and I am more than happy to give you space to share your experiences. I think they are important – although it is painful to read them.  I think it is also vital for people to know the level of abuse and hatred that there is around this subject. I am aware of doctors, politicians, journalists and others who have been threatened by this extremist ideology. I am really puzzled as to why it is happening and why our cultural elites have so bought into this agenda.

I hope as we correspond that we will be able to respectfully explore the wider issues. I’m sure we won’t agree on everything but its good to discuss. By the way you write very well..

I am so sorry about the level of abuse you have had to endure. It sounds and is horrific. I have experienced a little of that from trans activists, but not nearly as much as you.

I think we can agree on these four things.

From a Christian perspective I would say this. You should never receive any abuse or hatred from a Christian because we believe that all human beings are made in the image of God. We are not misogynist – because the Bible tells us that men and women are both equally made in the image of God – that is what it means to be human.    And in terms of identity there is a wonderful expression that sums up the Christians identity…we are ‘in Christ’.   Whatever our varying experiences, abilities and ‘identities’ they are all ultimately seen in Christ.   When you come to St Petes you will see that there are a wide variety of people with a wide variety of experiences. We are one body because we are united in Christ. I hope one day to be able to explain what that means. But meanwhile let me simply say that you are welcome – both on this blog and in the church.  I hope you will find real love there.

PS.  I wonder if you’ve read this book?  I thought it was really helpful…

PPS – I look forward to reading your further reflections.