It’s always wise advice, that when a horrific tragedy occurs one should refrain from commenting. Not least because in the midst of an emotive situation we don’t know the full circumstances and more importantly to make room for grief, mourning and respect.   But we live in a 24 hour news cycle society – we live in a world where it seems as though every politician, journalist and cleric has to tweet their sympathy/outrage/solution to the world.

Thus it was with the Christchurch shootings.   The blood was hardly dry on the Mosque floors, before the cyber ink flowed.   It was not just the killer who used Facebook to livestream his sickening and perverse deeds – the internet and this incident was seized upon by many for their own ends. Personally I find the horror of these kinds of massacres such that I have no desire to read about or watch it, let alone comment. 50 humans beings have just been killed by another human being – I’m not sure that in the moment I need to know anything more. There is a time for weeping. And silence.    Understandably and rightly there is a great deal of outrage at the voyeurism of the video being livestreamed on Facebook and then downloaded millions of times.   But is the endless commentary not in its own way a different kind of voyeurism?

The numerous commentaries, the good, the bad and the ugly, tell us a great deal about our society – and most of it is not good. Indeed the killers aim of stirring up ferment, violence and division seems to have been achieved already.

I’m not talking here about the small but dangerous group of people whose minds have been so warped by hatred, ideology, drugs, violence and personal circumstances, that they actually rejoice in this evil and treat the killer as some kind of hero.  Their condemnation is deserved.   No- I’m talking about those who, whilst they condemn the killings,  nonetheless have some degree of sympathy with those who kill Muslims.  Most are wise enough not to be vocal just now but there is a private sympathy and understanding.   They will engage in ‘whatabouterry’.   ‘Yes it was horrible but what about the thousands of people killed by Muslims?’ – as though the one evil somehow justifies the other.

Some are not so quiet.  The most infamous perhaps being this statement from Senator Fraser Anning of Queensland: 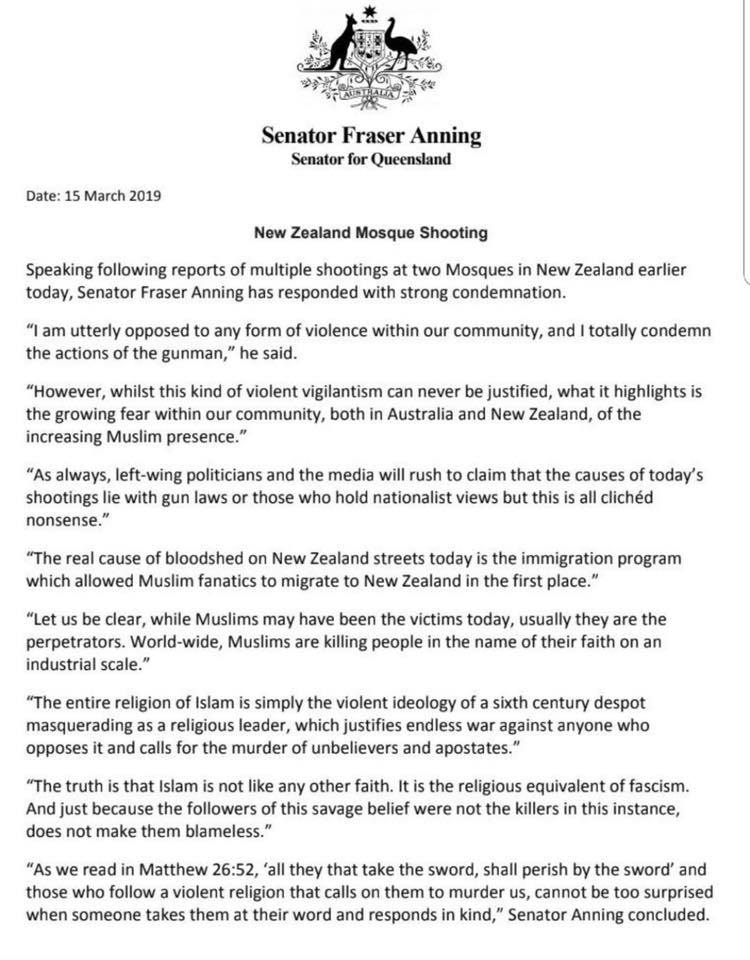 I am astounded at the crassness and ignorance of this letter.   The real cause of the bloodshed is the immigration programme that allowed Muslim fanatics to move to New Zealand?!   The Senator has no idea of the state of Islamic fanaticism in New Zealand but to suggest that the Muslims who were slaughtered are responsible for their own deaths is as perverse as it is illogical.

How dare he use the words of Jesus to justify this evil!  Jesus was not teaching revenge or political policy.  He was telling Peter to put away his sword because violently resisting his unjust arrest was not going to help anyway and would just beget more violence.  If you claim to be a follower of Jesus, when someone throws an egg on your head, you don’t respond by punching them!

Senator Anning is extreme but I think all of us, including myself, need to pay more attention to how we use words and how they can so easily be misinterpreted.   This does not mean that we should be cowed into silence – but rather than our words should be considered and seasoned with salt.  The truth should always be spoken in love.

I would like to say this following tweet is an aberration – but it is only one of several I have read.   It is as crass, crude and ignorant as Senator Annings.

The Philosopher and anti-Brexit obsessive, AC Grayling saw his opportunity as well.

Apparently Brexit, and those who voted for it, are complicit in the Christchurch massacre. Even the BBC Sunday programme linked Brexit and the New Zealand shootings – without blinking an eyelid.   This is as perverse and irrational as the killers own confused reasoning in his manifesto. Note that Brexit is perceived as “an evil disease that needs to be eradicated”. 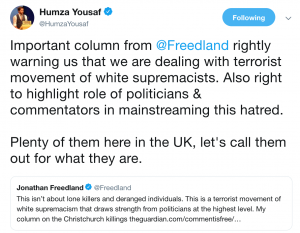 Of course our One Party Ideology in Scotland was quick to get in on the act – politicising the event for their own purposes – gleefully using the massacre to reinforce their own anti-Islamaphobia credentials – as well as using it to show what that this is what happens when you don’t automatically buy into their ‘progressive’ values.  My concern here is the hypocrisy – attacking this extreme manifestation of identity politics whilst at the same time espousing a milder form. This week Mike Russell referred to Tory MPs as traitors and when given the opportunity do so, the FM refused to take that opportunity. Meanwhile Humza Yousaf, Justice Secretary did not miss his opportunity to jump on the bandwagon to signal his own virtue/policies and condemn that of those who disagree with him.

Jonathan Freedland in The Guardian uses the old trick of guilt by association (in much the same way that Richard Dawkins cites Westboro Baptist as being caused by mainstream Christianity) to blame Trump, Orban and basically anyone who does not accept the ‘liberal’ progressivism’ of the New Left. Possibly the worst example of this was an article from Dani Garavelli in the Scotsman which  is one of the most disgusting self righteous, hypocritical, intellectually vacuous pieces of ‘journalism’ I have read in a long time. To use the massacre of 50 Muslims in NZ to further your own narrow politics and tar all who disagree with you as responsible is shameful.

This is what Brendan O’Neill calls the barbarism of identity politics .   It is the very thing that the killer was looking to stoke up – and so many of our journalists, politicians and commentators give him what he wants – because they are playing the same game.

And so in order to deal with the demonisation of Muslims you just demonise those who don’t agree with your particular ideology.  Thus Melanie Phillips, Rod Liddle, Doug Murray – even Dan Walker are cited as causes.  And the left who are not ideologically pure enough are also fair game.   Richard Dawkins, Sam Harris and even Chelsea Clinton were blamed because they are not sufficiently pro Islam.  When Iain Macwhirter, impeccably liberal and left wing journalist’ stated that Boris Johnston was not responsible for Christchurch, he was immediately turned upon by the Mob.

The trouble with this is that it is far too simplistic.  The killer is, from his own manifesto, a self-identified fascist and is a racist, deeply into white identity politics.   But he is also an extreme environmentalist, believing that the planet is over populated.  He called himself an ‘eco-fascist’.   Does this mean we should blame the Greens for the massacre?  Or warn those children on the ‘climate change’ strikes that they are being manipulated by ecofascists?!  Does the fact that he was into body building and video games mean that we should blame the gym and computer games. “Spryo the Dragon3 taught me ethno- nationalism and Fortnite trained me to be a killer and floss on the bodies of my enemies” https://www.spectator.com.au/2019/03/the-christchurch-killer-behind-the-headlines/

Another difficulty is that this is a form of the Bushite philosophy where the world is divided into the good Empire and the bad Empire.   If you are not for us then you are not one of us.  If you don’t accept the prevailing ideological consensus re Islam then you are not ‘one of us’.   You must be ‘one of them’.   It is a myth of the prevailing ideology that Islam is both inherently peaceful (just like every other religion except of course American evangelicalism) and that it is a race, not a religion.  On the simplistic narrative of the Freedlands, Garvellis and Owen Jones’s of this world, anyone who thinks that Islam is a political system (as well as a religious one) and as such is fundamentally incompatible with the values of the West, is automatically castigated as a racist whose views lead to slaughtering Muslims.    In this simplistic fundamentalist world of the New Progressives it is sadly necessary to point out that being opposed to the ideology of Islam does not mean that we do not not welcome Muslims (especially refugees) nor that we do not permit them to practice their faith within our countries.  Freedom of religion is after all a fundamental value of the Christian West.   But in order to protect that freedom we cannot ignore the fact that Islam is a political system and that where it prevails there is either a greatly reduced or no freedom of religion.  Can our commentators name one country where Islam prevails where there is real freedom of religion?   Islam on Lewis: Why the church should support Muslims’ right to build mosques

My view is that I welcome Muslims but I oppose Islam.  Does that make me a fascist?! 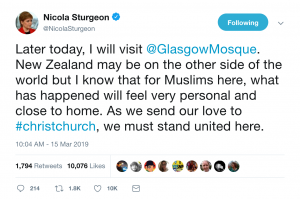 There is also a worrying double standard with some of our commentators. I was in a church composed mostly of Nigerians yesterday. 10,000 Nigerian Christians have been killed in the past four years. – 120 of them in the past three weeks.  Can anyone explain why this massacre is not headline news?  Is it an implicit racism which considers that the lifes of people in Africa are not as valuable as the lifes of people in New Zealand?  Or is that it just doesn’t fit the narrative of the political classes?    I’m wondering why Nicola Sturgeon did not immediately visit one of the 80 Nigerian churches in Scotland when 120 Nigerians were killed?   I don’t object to her visiting a Mosque  nor do I question her motivation in so doing – but I do question why there are not visits to churches  every time there is a massacre in Pakistan, or Nigeria or the Middle East.  Or why Christophobia isn’t as big a concern for the Scottish Government as Islamaphobia?

Again Brendan O’Neill hits the nail on the head – https://www.spiked-online.com/2019/03/18/new-zealands-ghoulish-opportunist

There have however been commentaries that show both balance and compassion.  Claire Lehnmann in Quillette is superb.  My colleague Steve Macalpine had this warning for those who want to blame Islam.    From the Muslim and Australian perspective I thought this was both moving and balanced.

Our primary concern in this should not be to promote our own ideology/philosophy/prejudices, but rather to seek to prevent such future suffering.  Ironically by engaging in the very identity politics that fuelled the hatred of the killer, our sanctimonious politicians and commentators are playing into his hands and ensuring that similar attacks will happen in the future.     I actually believe that real fascism is a genuine danger to our culture.  But when you demonise everyone who does not agree with you as a fascist,  rather than discouraging fascism, you run the danger of enabling it.   Whether of Left or Right, political extremism will only be encouraged by the political classes ignoring the suffering, and using the poor only as objects of their pity or electoral fodder.

Returning to Senator Anning’s misappropriation of the Bible.  Rather than twist the words of Christ, we should listen and be doers as well as hearers of the Word.  Jesus tells us that we are not to use the weapons of this world;  that our fight is not against flesh and blood but against the spiritual forces of evil; that we are to love our enemies; that we are to proclaim the good news of Christ to all; and that we seek to persuade men and women to be reconciled to God and to one another.   We weep with those who weep and we point to the only One who is Good.