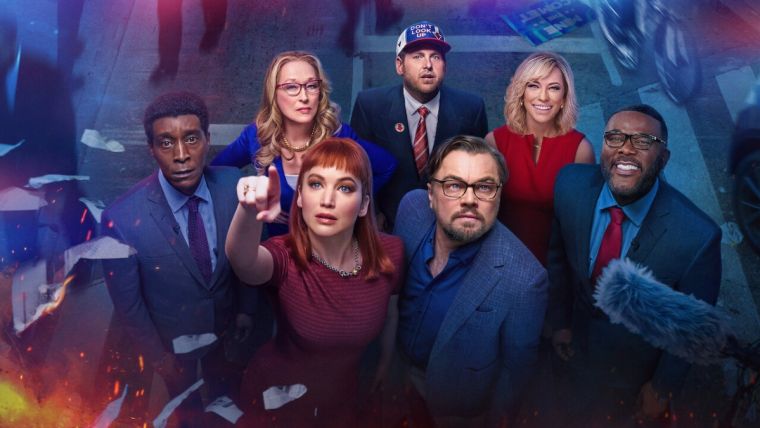 *Spoiler alert: This article contains details of the plot and ending to the movie ‘Don’t Look Up’.*

There was a time when comedians got lots of laughs mocking the religious eccentrics who stood at street corners with sandwich boards proclaiming ‘the end of the world is nigh’. Not anymore.

Now such catastrophism has gone mainstream – or at least Hollywood. It’s not just the end of the world disaster movies – but the fact that we are supposed to take them seriously. Hollywood is preaching to us – with all the subtilty of a flying mallet.

Netflix’s latest ‘blockbuster’ movie is a prime example. Don’t Look Up, despite being a flop in cinemas, is one of the most viewed films on Netflix and has been garnering a lot of column inches in the press.

Sadly reviews, like so much else in our society, have been politicised. If you agree with the point being made in the film/sermon, then you will love it. If you disagree then you will hate it. But Don’t Look Up is also fascinating from a Christian perspective.

Let’s start with the good. This is a well-made movie, with some decent performances from Leonardo DiCaprio as the scientist who can save the world, and Meryl Streep as the Trumpesque President who dooms it. It is meant to be humorous and sometimes it is.

There are also interesting if exaggerated perspectives on the role of celebrity media, big tech and the human propensity in the face of disaster to ignore reality and turn to false idols instead.

From a Christian perspective there is one scene in which, without a hint of satire, the doomed humans turn to prayer. The troubled teen who was ‘raised evangelical, but found his own way’ volunteers to pray as the world is about to end. It is far too beautiful a prayer for such a satirical and dumbed down movie.

Because despite the good, this is one of the dumbest and most inane films I have seen in a long time. Don’t Look Up reminds me of the worst kind of Christian movie, where the actors seem to be deliberately ham acting the most cliched Christian characters they can find, and the plot reads as though it came from a Jehovah’s Witness children’s magazine!

It would be difficult for me to spoil the plot, because if you haven’t gathered what the whole film sermon is about after five minutes, I despair. But if you want to put yourself through the two hours and 25 minutes of torment, don’t read the next few paragraphs.

The simple plot is that Earth is threatened by an approaching comet which two scientists try to warn the US president about. The president is more concerned about her poll ratings and seeks to deflect away from the approaching reality.

Evil money grabbing capitalists (including a big tech zillionaire) see the comet as an opportunity to do some mining for precious minerals; ordinary people are more interested in celebrity gossip on their mobile phones; TV hosts are dumbed down, inane and self-obsessed; the FBI are clowns; and we even have a racist, homophobic space pilot.

Of course, the earth is destroyed – but at least 2,000 people escape and take a 27,000-year flight to another planet, where, as the elect emerge from their cryogenic sleep, naked into their new paradise, the president is eaten by a dinosaur.

The purpose of the sermon is clear. Adam McKay, the writer, director and producer leaves us in no doubt: “This movie came from my burgeoning terror about the climate crisis and the fact that we live in a society that tends to place it as the fourth or fifth news story, or in some cases even deny that it’s happening, and how horrifying that is, but at the same time preposterously funny.”

The entertainment value, acting, cinematography is one issue. But what is most revealing about Don’t Look Up is what it tells you about the values of the media elites in our culture – and they don’t get much more corporate elitist than Netflix – and how they see the whole world through the narrow confines of US politics.

The basic premise of what is, to put it mildly, a smug, morally and intellectually infantile script, is that the elites don’t listen to the apocalyptic warnings – and that the dumbed down populace just follow them. But in the real-world environmental activists have been warning about the imminent end of the world for all of my life.

We were told for example that all the Arctic ice would be gone by 2015, and Prince Charles (hardly the non-conformist ‘ordinary’ scientist) told us in 2009 that we only had eight years to save the planet.

Every time one of the ‘end of the world is nigh’ prophets opens their mouth, they are given endless publicity by media and politicians alike. In other words, the film’s premise is based on a big lie – or perhaps a delusion, given that the Hollywood elites do really seem to see themselves as oppressed truthtellers with little or no power!

What is also clear from the movie is that our elites regard working-class people as uneducated, simplistic, pleasure-seeking ‘deplorables’. The irony is that many university-educated (indoctrinated?) will see this film as a prophetic work of genius – whilst most working-class people will see it as the smug sermon against them which it undoubtedly is.

The attempt to blame all the evils of the world – including the sin of ‘climate denialism’ – on Donald Trump, and those who supported him is as prejudiced and ignorant as the caricature of ordinary people it attempts to portray.

Then there is the not-so-subtle message that we really need to trust ‘the science’. The only people in the satirical world of Don’t Look Up who can be trusted are the ‘real’ scientists. The trouble is that when you adopt the belief that there is something called ‘the science’, then you end up negating science by pronouncing those who don’t share your conclusions as obviously not being ‘real’ scientists.

The genius of science as a working methodology is that it can be falsified. Once you pronounce your views as de facto unfalsifiable, then you have moved beyond science into the realms of ideology.

The hypocrisy is breathtaking. Leonardo DiCaprio is a UN Climate Change ambassador who was photographed sunning himself on a £100 million superyacht which burns up more carbon in one week than most of us would use in one year. It’s like the preacher making a series about the necessity of sexual purity while having an affair with his secretary!

The film, made by one of the largest capitalist corporations in the world, suggests that it is the capitalist corporates who want to ignore the reality so that they can make money. Whereas in the real world, it is largely the corporates who are demanding that climate change be dealt with – and that they get paid to do the dealing. There is a lot of green money to be made.

One Christian commentator sees Don’t Look Up as a commentary on the government’s response to Covid – which just goes to show that in the post-modern world we can make things mean whatever we want them to.

Don’t Look Up is a good old fashioned, modernist film – with a clear moralistic message. The trouble is that it is the wrong message. At one point in the film, we are told that the end of the world is too serious to be joked about – in a film that is largely a joke.

But it does at least get this right: human beings do need to look up but not to see some approaching comet or end of the world climate catastrophism. We need to look up to see the God who has the whole world in his hands and that the present heavens and earth are ‘being kept for the day of judgement and destruction of the ungodly’ (2 Peter 3:7).

The end of the world is not nigh yet because the Lord is giving humanity a chance to repent and turn to him. It’s not that we shouldn’t be concerned about the environment (precisely the opposite). But we are not to look to ourselves for salvation.

Whether it’s nuclear bombs diverting comets, or mega-corporations building windmills, we cannot save ourselves or the planet. But we should look up to the One who can. In this regard, the prayer prayed by the troubled ex-evangelical teen is a great one for us and our leaders to pray. The only difference is that, unlike Mr McKay, we are praying to the God who is the hearer and answerer of prayer. And who can, and does, act.

‘Dearest Father, almighty Creator. We ask for your grace tonight, despite our pride. Your forgiveness, despite our doubt. Most of all Lord we ask for your love to soothe us through these dark times. May we face whatever is to come in your divine will with courage and open hearts of acceptance. Amen.’

Banning conversion therapy: a step too far or not far enough? &#8211; CT