The annual Conference of the Methodist Church of Great Britain is meeting in Birmingham this week and next, other things it will debate a report entitled “God in Love Unites Us”.

The report will be endorsed, unless something spectacular (or miraculous?) happens, as it has already been approved by 29 of the 30 Methodist synods.The report recommends that the Methodist Church approve of cohabitation and extend its understanding of marriage to “two people” rather than “a man and a woman”.

I have Methodist friends who are now wondering if they can remain in the Church and who feel a sense of bereavement as their Church seems to have been hijacked. But are they overreacting? What does the report actually say?

I have read through the whole document and I’m afraid it is worse than has been reported. It begins with a nice phrase, “We believe that God has made us to be in relationships and has shown us how to flourish through those relationships.” Unfortunately, it then goes on to ignore what God has shown us and instead relies more on Stonewall than Scripture.

There are endless pages of meaningless ‘theological’ waffle. It is, in effect, Alice-in-Wonderland, post-modernist theology where words mean “whatever I want them to mean”. There is a lack of reliance on Scripture, which is misused and abused as much in this report as any I have ever read. For example, how can the teaching in Psalm 139 that we are all “fearfully and wonderfully made” be seen as a justification for same-sex marriage or co-habitation? And the report speaks with such authority about Isaiah 56 and Acts 8 as to affirm positively other sexualities.

Rather than regard Scripture as authoritative, the report tells us that it relies for “authoritative commentary” on sexuality from the World Health Organisation (WHO) which it naively describes as “independent”. And among other things, the report commends ‘queer theology’; tell us that sex is assigned at birth, based on “perceptions” of biology; and that sexual desire is a part of the wider desire for just and loving relationships! In an overpopulated world, sex should no longer be about procreation; gender is a social construct, and although only 2 per cent of people identify in the UK as LGB, the authors of the report believe – without out any evidence – that it is likely to be many more.

There is no concept of our identity coming from God, being made in his image, and, for Christians, being restored in the image of Christ. Instead, we are told that our identity is given us at birth by “those who care for us”. Nothing to do with either God or biology apparently. But the simple truth is that my parents, doctors and nurses did not decide as I came into this world ‘oh, let’s make this one a boy’!

And then of course there is the other great doctrine of the woke progressives: everything is to be determined by “lived experience” – as long as it is the right kind of lived experience.

“We would urge the Methodist Church likewise to recognise the lived realities of the way relationships are practised today,” the report reads. “A failure to do so may ultimately be regarded as hypocrisy, if it simply ignores how its members and adherents are actually leading their lives.”

So now we have the Church of John and Charles Wesley, the Church of George Whitefield, telling us that doctrine should be determined by what people want and how they live their lives; not what God says. Nothing here of repentance, renewal, or any idea that what we want might not be what God wants – and might not be good for us.

“We believe that, in awe and humility, the Methodist Church needs to recognise that it is being called by God to take the next steps in the development of its understanding of relationships and marriage,” it continues.

“Those steps include enabling people of the same sex to commit themselves to each other in Christian marriage services.”

They say that this is being done on the basis of “the promptings of the Spirit in the light of the gospel values and trajectories of development that are recorded in the Scriptures overall”.

But this has nothing to do with awe, humility, Scripture, or the Spirit. To claim that the Spirit is guiding them to go against what the Spirit guided the early church to is about as near to blasphemy as you can get.

It’s a form of woke fanaticism – or as John Wesley put it: “Try all things by the written word and let all bow down before it. You are in danger of [fanaticism] every hour, if you depart ever so little from Scripture; yea, or from the plain, literal meaning of a text, taken in connection with the context” (Works, 11:429).

The reliance on Stonewall, the WHO, the “lived experience” of some and the doctrines of the current secular Zeitgeist, leads the report into the mistake of rejecting what the Bible teaches in some places as error. Again, Wesley summed up the traditional Methodist doctrine well: “Nay, if there be any mistakes in the Bible, there may as well be a thousand. If there be one falsehood in that book, it did not come from the God of truth” (John Wesley, Journal, 24 July 1776).

Once you reject what Jesus says in Scripture, that makes you less rational, not more. For example, the report suggests, rightly, that no-one should refuse to marry someone because of race. Yet they then go on to say that clergy will be permitted to do so because of sexuality. Given that the Methodist Church will allow same-sex marriage, how can that be perceived as anything other than discrimination? If scripture does not forbid it, then why should individual churches or ministers be permitted to do so? This is an argument that will doubtless resurface in a few years as Methodism continues to ‘evolve’.

That is, if the Methodist Church is still here as it does appear to be in terminal decline. There are now only 164,000 people in the UK who are members of the Methodist Church – a decline of 6,000 over the past year. The trajectory is downward – despite boosts from immigration. If the Methodist leaders continue to be guided by the woke ideology of today’s elites, rather than the Word of God, that decline will accelerate.

Methodists were involved in the Great Awakening. Yet they are now turning into the church of the great Awokening. The saying ‘go woke, go broke’ applies to churches as well.

But all is not lost. Some evangelicals are making a stand – although that is anticipated in the report. As in the Church of Scotland and the Church of England, those who are making the policy and who control the denomination need the evangelicals to remain, and so there are the usual pleas for ‘unity’ and ‘disagreeing in love’ – even as the denomination changes its doctrines and moves even further away from the Christian faith. 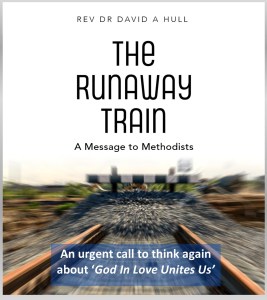 Perhaps the strongest case against the report has been made by Rev Dr David A Hull, who has written The Runaway Train – a Message to Methodists. At the end of the book, he makes this plea: “The British Methodist Church faces a profound moment of decision. It must choose one or the other: to reaffirm the traditional teaching of the Christian church, the teaching of the Bible and its current position; or to abandon it in favour of a secular worldview that is shaped by political pressure groups. Either decision will have profound consequences for the future.”

Some will have to leave. Methodist clergy have to affirm that they hold to the doctrines of Methodism. If those doctrines have changed – as they will do if this report is accepted – then to say that you affirm them when you don’t, would be a lie. Liberals may find ways to make words mean the opposite of what they say, but no evangelical should play that silly and deceitful game.

This weekend would be a good time for all Christians to pray for our Methodist brothers and sisters. May the Lord strengthen what remains and is about to die. May he grant repentance and a return to the Gospel of the Wesleys and Whitefield – the Gospel of the apostles, the Gospel of Jesus Christ. That’s the only method that works.

Quantum 152 – Including Abuse…Swearing…and some Great News!

Lessons from the Disruption &#8211; How a Church Split Can be Positive!