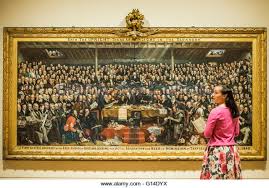 It was a surprise to be asked by Christian Today to comment on the 174th Anniversary of the Free Church Disruption of 1843.  I doubt that the anniversary went through the minds of even most Free Church people.  But as I reflected on it, I realised that the Disruption still has a lot to teach us – so as we head into the General Assemblies of the Church of Scotland (about to approve SSM) and the Free Church – I am praying – Lord, do it again!    It  won’t be in the same way, but may God grant that the same passion, zeal and love for the Lord would characterise us – if the New Wine comes can the Old wineskins contain it?

The ‘Great Disruption’ happened 174 years ago this week. Why does it matter? Why should we care?

Painting by en:David Octavius Hill (died 1870) of the Disruption of 1843 which formed the Free Church of Scotland.

On the 18th of May 1843, 174 years ago, 121 ministers and 73 elders got up and walked out of the General Assembly of the Church of Scotland being held in St Andrew’s Church, Edinburgh. They were met by huge cheering crowds and were eventually joined by others so that 474 ministers out of 1200, and about one third of the membership of the National church left. So what? Why should we bother even noting this, never mind reading and thinking about it? Unless you are one of the select elect who are Scottish Church History buffs? Before you quickly dash away to read something far more interesting, hold on a minute and allow me to introduce you to this great event in the Churches history so that you can be inspired, challenged and hopefully learn some lessons for today.

It may take some convincing but let me try to persuade you why this event, which was known as the Disruption, was so important.

It was an act of great sacrifice and courage.

When these ministers, elders, missionaries, teachers, students and members left the Church of Scotland it was often at a great personal cost. They had to give up manses, church buildings and their stipends, without knowing how their families and congregations were to be provided for. Many congregations had no buildings to worship in – there were a variety of places they did meet – a coal mine, the beach, the hillsides – even on a floating church – even a ship especially built for a homeless congregation! Why did they do it? Was it on some obscure, angels dancing on pinheads, theological point? No – they did it because they wished to assert the ‘spiritual freedom of the Church’. The State law courts had just judged that heritors, landlords and other State officials had the right to appoint ministers of particular congregations (this was known as patronage). The Evangelicals (most of whom left) defended the right of the congregations to call their own ministers free of State interference. The UK government at the time was badly advised and believed that only a handful of fanatics would leave. But for these people of principle they were prepared to give up all their ‘temporal’ benefits in order to maintain the Lordship of Christ and the spiritual independence of the Church. We talk a lot about being radical but I wonder if we would have such courage?

It was a radical challenge that both church and society needed.

Last year I represented the Free Church at the opening of a new exhibition entitled ‘Painting with Light – Art and Photography from the Pre-Raphaelites to the Modern Age’.

Why was the Free Church invited? Because we have loaned them one of our great treasures – Octavius Hill’s Disruption painting which was really the first such painting to be based on photographs. As such it had pride of place in the first room of the exhibition. It is only the second time it has been out of Scotland – normally it has pride of place in the Presbytery Hall of the Free Church offices on the Mound. The painting is quite extraordinary – not just because of its significance in the history of photography, but also because of what it portrays. As I listened to the invited guests, from the Arts establishment, I was struck by some of the comments which observed that so many ordinary ‘common’ people were in the photo. I was silently proud that I belonged to a church whose roots are in the crofters, fishermen, teachers, miners, doctors, nurses and working people of Scotland. The series of pictures around the Disruption painting describes the 1843 Free Church as radical, democratic, cosmopolitan and international! In fact it was that radical tradition – the determination to hold to the Bible as the Word of God, and to work it out in the whole of society – which first drew me to the Free Church – even though in some ways the modern Free Church had moved away from its radical roots and retreated into itself.

Next week the Church of Scotland General Assembly and the much smaller Free Church Assembly (there were reunions in 1900 and 1929) will meet in their General Assemblies. Some in the Church of Scotland feared a further ‘Disruption’ over the issue of Same Sex Marriage, but that is not going to happen. However what is happening is that the Church of Scotland has been in free-fall over the past few decades – its membership has fallen from 1.4 million to well under 400,000 and continues to fall by 20,000 per year. I believe that the key reason for that decline is because of something that the Free Church introduced into the Scottish church, which has become a deadly virus for the whole Church in Scotland.

In the twenty years following the Disruption the Free Church built thousands of churches, manses and schools – and three theological colleges (if you ever visit Edinburgh it is hard to miss the beautiful New College building on the Mound where the Church of Scotland General Assembly is now held). But the church became proud and arrogant and in seeking ‘new learning’ managed to bring in the ‘Higher Criticism’ teaching about the Bible from Germany. This had the effect over many decades of undermining confidence in the Bible as the Word of God, and as a result, when the Tsunami of cultural and anti-Christian change hit Scotland in the 1960’s, in effect the churches largely folded like a house of cards, or became inward looking. In either sense both died. When the church just goes along with the contemporary zeitgeist it will wither and die. When it retreats into a pietistic and legalist shell it will also die. But what the Disruption teaches us is that when the people of God are prepared to make a stand for the Word of God, to radically challenge the culture, and to live boldly for Christ, it can really turn the world upside down.

One review of the exhibition and Hill’s painting observed: “The result captures not only a key moment in history, but also a cross-section of society which includes many of the era’s most notable names.” My hope and prayer is that the modern day Church will include that wide cross section of society – yes including the Lords and Ladies and the Culture gatekeepers, but included as human beings made in the image of God, not rulers and elites self-made in their own image. We need to get back to our radical and biblical roots. We need to be proclaiming the Gospel across every area of society and challenging the powers that think they are, to submit to The Power that really is, and from whom all their power is just a pale derivation. Rather than welcoming the poor and identifying with the rich we should identify with the poor and welcome the rich.

History teaches us that when the Lord does a new work in a community it is often preceded by, or causes, a great disruption in the Church. Think of the Reformation in the 16th Century, or the Puritans in England in the 17th, or the Methodists in the 18th, the Disruption in the 19th, and the Pentecostals in the 20th. If there is to be renewal and revival in the 21st Century church in the UK, then the Lord could bring it about through the traditional and established churches that appear to be dying. But did Jesus not say something about not putting new wine into old wineskins? (Matthew 9:17). Whether the Lord renews older churches or starts up new ones, the lesson of the 1843 Disruption is that such renewal and reformation is costly, painful and yet ultimately exciting, beautiful and fruitful. Lord – its time for our 21st Century revival!

The Tate, the Establishment and the Free Church

A Tale of Two Assemblies