Letter from Australia 80 – A Significant Birthday, an Educational Insult, The Wrong Side of History, and the Free Church

In the midst of this pandemic there is much to be thankful for – it is because of the Lord’s mercies, which are new every morning, that we are not consumed – great is his faithfulness! (Lamentations 3:23).   Not the least of this is the wonder of modern technology.  Yesterday we were able to celebrate Annabel’s 60th birthday in a combination of ‘online’ and onsite events – Zoom, church, restaurant and home were all combined to great effect.  What struck me about the Zoom ‘conference’ with family and friends was the difference that a little (or a lot) effort makes! 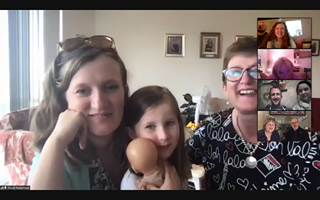 Whether it was the photos and balloons in the background,  the co-ordination of everyone in different parts of Scotland coming online at the same late hour, or the co-ordination with Becky and the girls driving two and a half hours in Sydney traffic – all of it worked beautifully and made for a special occasion.    All of this was backed up by friends here.  To me this is a reflection of the family of Christ throughout the world and how we should connect at a time of disconnection – it doesn’t just ‘happen’, it requires thought, effort, prayer and good timing!

Annabel and I were reflecting on how unexpected life often turns out to be.  Who would have thought that she would be celebrating her 60th birthday in Sydney – in a world where we are effectively forbidden to travel!  Of course, there are some things – like death and taxes, and abuse on social media – that one can always expect!

As regards the abuse I have noticed that whenever the Lord begins to do something, the tongues start to wag, the fingers start to click, and the abuse begins.  I was sent this cracker from someone who I have had to block – he seems to have a wee obsession with me – and I don’t really see any point in engaging with someone who refuses to engage and just prefers to hate.

“No, he’s of the “Scottish Family Party”, a front for the Rev David Robertson’s mewlings, one of the singularly most unpleasant individuals in the Free Church of Scotland who’s been desperate to become a celebrity cleric for decades, and tried doing to by baiting Richard Dawkins when he was hip with the kids. He’s also been trying to take the FCofS back to the 19th century. I did warn Lucas getting mixed up with Robertson would come back to bite him, and sadly this now appears the case.”

It’s a sad message for many reasons, but it is helpful to see how hatred and prejudice work. Truth is irrelevant for someone who hates.  The Scottish Family Party has nothing to do with me. In fact, I have good friends who question why I question whether such a political party can work.  But this is a democracy and I wish Richard Lucas and his friends well.  I’m sure though that Richard will be amused that his party is just a front for me!    It’s also a little amusing that my enemy thinks that Richard Dawkins was ever ‘hip with the kids’.   Dawkins constituency is much more the old ‘pale, male and stale’ rather than the hip and happening kids!    And I love the notion of my wanting to be a ‘celebrity cleric’.  Firstly, there is no such thing as a celebrity cleric in Scotland and secondly, it’s the very last thing I would want to be – not least because of the abuse such a position accrues.

However, in a couple of things my enemy may be correct.   I could well be ‘one of the singularly most unpleasant individuals in the Free Church of Scotland’  – although I do wonder what other individuals my enemy actually knows in order to make the comparison.  But I can certainly testify that there are far nicer people in the Free Church than yours truly!

There is however one truth in his wee diatribe – if you look hard enough you can always find a gem in the dung!   It is true that I would like to take the Free Church of Scotland back to the 19th century.  My enemy meant it as an insult because he is a chronological snob, believing that anything in the past must be worse than today’s world or the Nirvana we are inevitably heading to.  After all, how can you progress by returning to the past?  Is it possible to go back to the future?

The statement as an insult is based on ignorance – an ignorance which means we can never learn from the past – because we think we already know.   But those who know their history can learn from it.  Why would I want to take the Free Church back to the 19th Century?

It was in studying 19th Century history that I came across this rather strange church, the Church of Scotland, Free.  Reading books like the Annals of the Disruption by Thomas Brown I was astounded at what happened.  The Disruption of 1843 is one of the proudest moments in Scotland’s history – here for example is an article in, (of all papers!), The National, which summarises it well – https://www.thenational.scot/news/18090228.church-scotlands-disruption-1843-unfolded/

The Free Church challenged the power of an intolerant and overwhelming State, stood up for ‘spiritual independence, cared for the poor, built hundreds of schools and churches, brought grain from Russia to avert the threat of famine in the Highlands, encouraged overseas mission, challenged the power of the landlords, established social work for the poor in the cities, and brought the Good News to many throughout Scotland.  Do I want the Free Church to return to that 19th Century vision?  You bet I do!    Given the choice between a narrow, parochial, defensive vision, and the grand vision of Chalmers, Guthrie and McCheyne there is no contest!   I am unrepentantly an ‘1843’ man!

So, to my enemy Mark – I thank you for the reminder of who I am.  Not a wannabe celebrity cleric, but an heir of a great revolutionary tradition which once turned Scotland upside down, and God willing, will do so again.   I am a follower of the Christ whose church in the 1st century turned ‘the world upside down’ (Acts 17:6) and has been doing so throughout the world ever since.   That Christ also commands me to love my enemies, do good to those who hate me and pray for those who abuse me (Luke 6:28) – so in obedience to Him, you have now been added to my prayer app!  I pray that the Lord will convict you of your sin, draw you to himself, and forgive you.  Then you will be able to appreciate, not only the good that the 19th Century Free Church did, but so much more.  You will come out of your wee enclosed world, into the full and glorious liberties of the children of God….

May we all know the peace, freedom and joy that Christ brings.

PS.  Here are some further articles on the radical 19th Century  Free Church that I want to return to!

Lessons from the Disruption &#8211; How a Church Split Can be Positive!

The Free Church and the Poor

The Tate, the Establishment and the Free Church

PPS – last weeks letter – it ties in with this weeks. – Letter from Australia 79 – Humiliation and Humility.