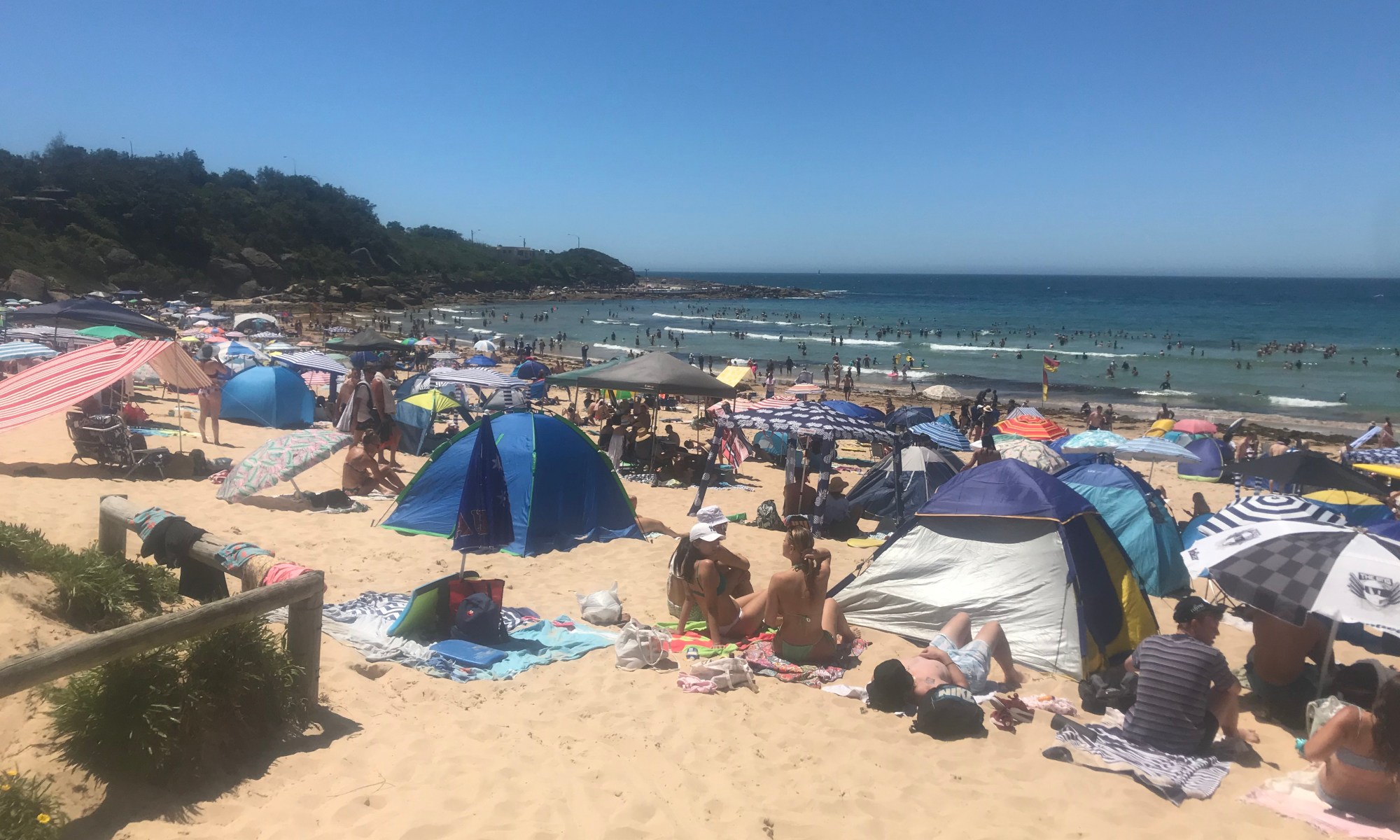 We said we wouldn’t do it.  But we did.  We fell for it.  We got ‘British’ sunburn.  We went to Freshwater beach on Australia day – along with thousands of others – in fact over 180,000 people went to the Sydney beaches that day.  We had the factor 50 , the umbrella, but the next day we felt the pain!  It seems so obvious but Australian sun is slightly stronger than Scottish sun! 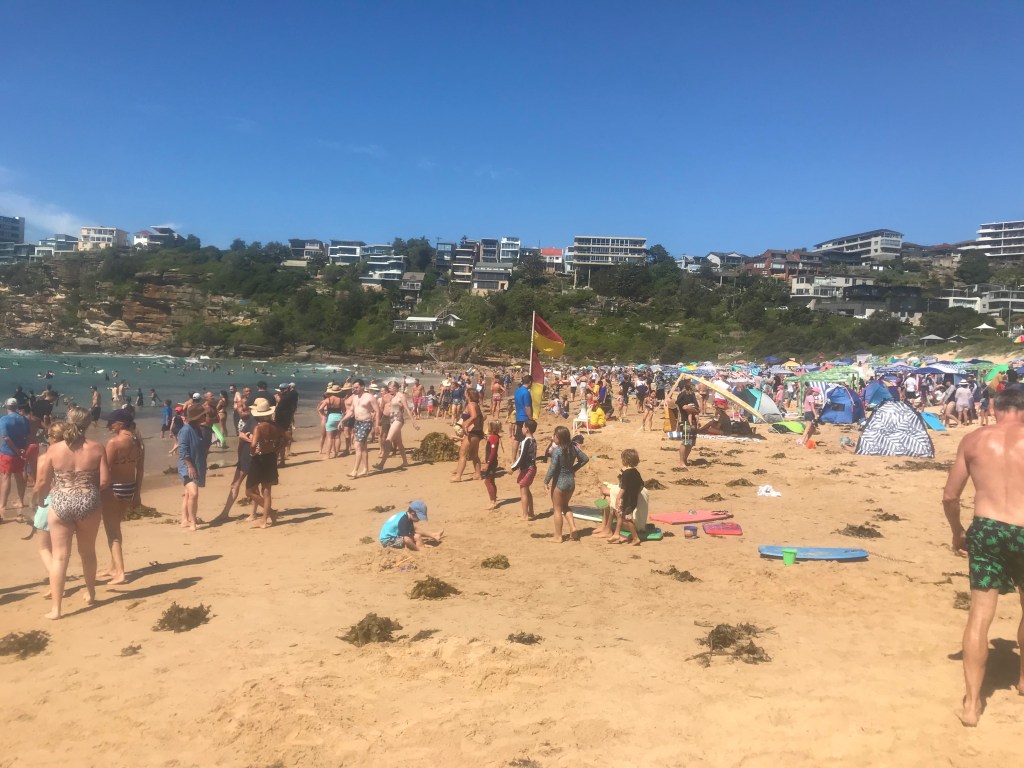 The Mask is Slipping

One of the things that amused me was the sign asking people to wear masks on the beach and keep social distancing.  If what we experienced was ‘social distancing’ then I would hate to be there when that was no longer observed – it would be almost obscene!  As for the masks – the situation just gets sillier.  I’m not sure why we need to wear a mask at all – when we have had no community transmission in Sydney for over two weeks.   We have now been told that it is legal not to wear a mask in shops, but it is illegal not to wear one in Church!  You don’t have to wear one in a café – but you do have to wear one in a hairdresser!  You don’t have to wear one in a hospital corridor, but you do on an empty train!    I’m sure there is some science somewhere – but in reality, it does appear to be somewhat arbitrary.   And the guidelines below are completely impractical and never followed:

It’s important you always carry a clean face mask with you and wear it properly:

The hypocrisy of the Big Tech companies never ceases to amaze me.  This week on Twitter I received a number of hateful and quite disgusting tweets.  One in particular went way over the line – a man accused me of being a paedophile enabler – just because I am a Christian.  Given that Twitter says that their community standards oppose tweets that harass or discriminate against someone because of their religion – I reported it.  Much to my surprise Twitter told me that their community standards had not been breached.  So, you can get banned for saying that a man cannot become a woman – but accusing someone of being a paedophile because of their religion is just fine.  Some community standard!

In fact, a number of things in the past couple of weeks have been quite humiliating.  And once again Richard Sibbes came to my aid.   In volume six of his collected works, he has a wonderful series of sermons on 2 Chronicles 34:27 – “27 Because your heart was responsive and you humbled yourself before God when you heard what he spoke against this place and its people, and because you humbled yourself before me and tore your robes and wept in my presence, I have heard you, declares the LORD.” The second of these is on the subject of humbling and humiliation.  I won’t repeat the whole sermon but here are a few things I found really helpful.

“Let us have before our eyes the picture of old Adam, our sinful nature: how we are drawn away by every object; how ready to be proud of anything; how unable to resist the least sin; how ready to be cast down under every affliction; that we cannot rejoice in any blessing; that we have no strength of ourselves to perform any good or suffer ill; in a word, how that we carry a nature about us indisposed to good, and prone to all evil”   – That may appear depressing and OTT – but to those of us who know our own hearts – we know the reality of this – and the great advantage is that it means we look to an ever willing Christ for aid – not to ourselves.

“Proud men are the devil’s pipes, and flatterers the musicians to blow those pipes.”

“Well, says Augustine, all men must be humbled one way or another; either we must humble ourselves or God will.”

“ A man may be humbled, but not humble….An hypocrite God may humble and work by him.  He may work by graceless persons, but he does not work in them.”

“There must be a constant endeavour to avoid the occasions and allurements of sin.”

“Only this caution must be remembered, reproof must not be given with a proud spirit, but in a loving, mild manner, with desire of doing good.”

“Sin is the bane of all comfort.  That which we love more than our souls undoes us.  It embitters every comfort, and makes that we cannot perform duties with spiritual life.  Our very prayers are abominable to God so long as we live in known sin.  What makes the hour of death and the day of judgement terrible but this?”

I love the Puritans.  Unlike far too many of today’s ‘Reformed’ they are not afraid to go to the heart and deal with the emotions as well as the mind – and body!  Although the above quotes may give the impression of being morose and depressing – I find them anything but.  They are realistic and hopeful – because they cause us to see ourselves in such a way that we have no one else to go to but Christ.    We cannot mask our sin – but once the sun of Christ’s love shines upon us – we can be freed from it.  We have redemption through his blood – the forgiveness of sins.  What a joy!