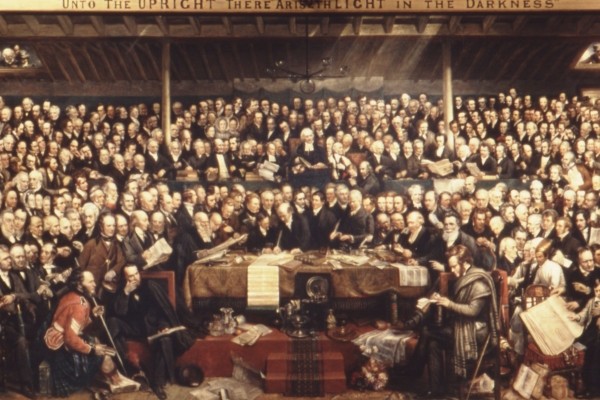 The Tate (British, Modern, Liverpool and St Ives) is at the very heart of the British arts establishment. The Tate British is a fantastic place to visit and has many interesting and stimulating exhibitions. Last night I was there to represent the Free Church at the opening of a new exhibition entitled “Painting with Light – Art and Photography from the Pre-Raphaelites to the Modern Age”. http://www.tate.org.uk/whats-on/tate-britain/exhibition/painting-light

Why was the Free Church invited? Because we have loaned them one of our great treasures – Octavius Hill’s Disruption painting which was really the first such painting to be based on photographs. As such it had pride of place in the first room of the exhibition. It is only the second time it has been out of Scotland – normally it has pride of place in the Presbytery Hall of the Free Church offices on the Mound. (The story was covered in several of the newspapers including this report in the National – http://www.thenational.scot/news/painting-showing-the-birth-of-the-free-kirk-is-given-rare-london-airing.17333)

It was such a fascinating evening. I was on my own. No one to talk to. Just people to observe, art work to see (personally I loved the whole exhibition) and conversations to be overheard! The Disruption painting really was the star of the show and I stood by it several times. It was so amusing to overhear some of the comments. They were all delivered in a posh plummy accent.

“Oh, the Wee Frees, why are they here? Why do they have fisher people? “.

“Amazing, amazing. The Free Church is amazing, they even had an Indian minister”!

“. Well I saw one lady. Oh I say there’s another! Being a woman is worse than being Muslim in the Free Church”!

I would so have liked to intervene and to deal with the patronising, prejudiced and ignorant comments – but I took a vow of silence.  Of course there were many more balanced, thoughtful and interesting comments as well.

There was also the small matter of a grand dinner in one of the galleries, where we were served superb food,

I was going to take a photo but thought it would look a bit plebish and I didn’t want to let the side down!   We then listened to a short intro to the exhibition.

At dinner I broke my vow of silence. I met some very interesting people – most of who seemed to be directors or trustees of the Tate. We discussed church, Christianity, whether there is such a thing as ‘bad art’, how does one value a painting? Whether there is a difference between value and price, is art more commercial now that it was in the past? And other philosophical and religious questions.  I was amused at the VIP who stated that there was no such thing as objectivity but that he also did not believe in relativism.   Other people around nodded as if this were sage wisdom. It just didn’t make any sense to me – and I said so. At times I felt like the wee boy shouting ‘the Emperor has no clothes’!   At times the conversation was a wee bit animated! I was the first one to leave and one of my hosts told me that it was a livelier and far more interesting dinner than their usual ones!  I enjoyed meeting the people as human beings, they were interesting and good company. But I honestly struggled with the whole collective Establishment ethos of the thing. I was most definitely The Outsider!

Here are some of the random reflections I have on the whole occasion.

The Arts Establishment is The Establishment. The political, economic, media, educational and arts establishments are all just sub-branches of the same establishment. It is the chairmen of companies, the principals of Universities and the graduates of Eton, Harrow, Oxford and Cambridge who are largely the patrons and controllers of the arts.

The Establishment is fundamentally atheistic or agnostic. And it is a superior kind of atheism.   They have either been bred to believe that they and their views are superior or having worked their way up the greasy pole they know they are superior.  If you remove Christianity from the aristocracy and the governing elites, you remove Christ’s teaching about all being sinners, all needing humility and all being there to serve one another. Money, power and status go unchecked.  The result is that an innate sense of superiority becomes the norm, and meritocracy is unusual. The gap between rich and poor, influential and low born, those in the know and those who don’t know, increases and becomes set in social stone.

The Establishments preaches and pays lip service to equality and diversity, but doesn’t practice it because it worships money, power and status.  The reason I mentioned the plummy accents was not to make a point about geography or ethnicity, but class. I also noted that the only black people I saw were those who were serving – I could have been in a Southern US country club! I don’t think that is reflective of racism, its just reflective of who the Establishment are.

One interesting aspect was when the speaker made a less than subtle dig at those who want to leave the EU and was applauded! As we are seeing in these days the Establishment is in a blind panic about the possibility of Britain leaving the EU and is pulling out all the stops to prevent that happening.   Frederick Forsyth reckons that 95% of the British establishment support staying in the EU – because the ‘the EU is the biggest taxpayer funded free ride in the world’. And these people are its primary recipients.  The papers make a great deal of fuss about welfare scroungers (and indeed those who are scroungers deserve the criticism), but there are establishment figures who do very well out of the largesse of the taxpayer – including in the arts world!

As I stood in the seemingly endless queue at the soulless Stansted airport, waiting for my flight back to the paradise that is Dundee, I reflected upon all these things and I realized that this is a world in which I am an alien. I don’t belong here. I may believe in the Establishment principle, but the Establishment no longer believes in God so I’m out.

When Willie Ruff, the African American Jazz musician and Yale musicologist, came to the island of Lewis in search of the roots of black gospel music, he went to the Free Church in Back to hear the Gaelic psalm singing.   He movingly describes how he sat there and from the beginning said ‘these are my people’!   When I was with the Independent Methodists last weekend, I thought, ‘there are my people’, as we worshipped on Sunday in St Peters, I thought ‘these are my people’. When I go to the Northern Men’s Convention in Manchester on Saturday I suspect I will be with ‘my people’.   Tomorrow I will be at the ‘Kirking of the Scottish Parliament’ – it will be interesting to see what I feel then! But last night, although I enjoyed meeting the people, it was a different world in which I was clearly the alien.

I belong to the radical Free Church, whose roots are in the crofters, fishermen, teachers, miners, doctors, nurses and working people of Scotland. The series of pictures around the Disruption painting describes us as radical, democratic, cosmopolitan and international!

I’ve never been so proud to be Free Church. In fact it is that radical tradition – the determination to hold to the Bible as the Word of God, and to work it out in the whole of society – which first drew me to the Free Church.

We use the term ‘radical’ in a different sense from the arts establishment.   They think that having Tracey Emin’s bed when she went through a breakdown is radical and cutting edge. Personally I think it is actually quite powerful and personally sad for her, but even sadder that there are those who think it is worth paying £2.5 million for it. http://www.dazeddigital.com/artsandculture/article/24280/1/watch-britains-most-controversial-artwork-come-home 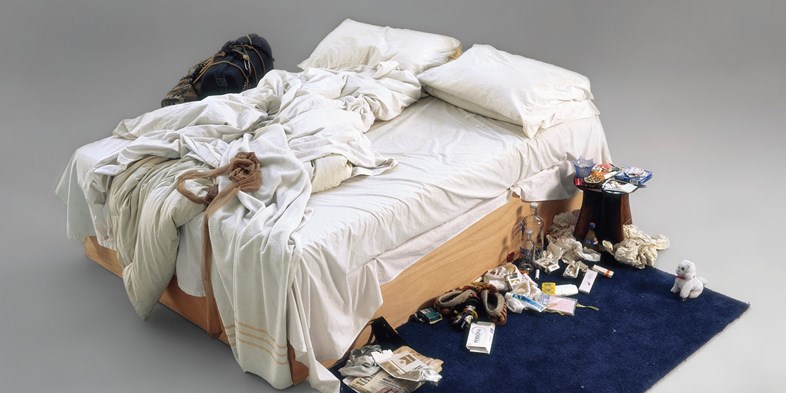 Likewise the infamous 1970’s Tate display of a pile of bricks was not radical or profound. It was indicative of the shallowness and meaninglessness of those who think that a pile of bricks that any of us could have set up is somehow the most important artwork of the period – http://www.independent.co.uk/arts-entertainment/art/news/how-to-build-controversy-from-a-pile-of-bricks-2277359.html

No – we use the term radical in the sense of its original meaning – back to the roots. Not in the sense of lets try and do something ‘outrageous/pretentious/ridiculous’ so that people can see how meaningful we are.   We are concerned about art – but we are also concerned about poverty, and sickness, about injustice and blasphemy, about racism and violence, about joy and peace, love and light, the deep and eternal vs. the shallow and temporary.  The pile of bricks would take an hour or so to put in. Octavius Hill’s painting took 23 years. In some ways both are reflective of the value we place on people and things.

The National’s quote about Hill’s painting is interesting –

“The result captures not only a key moment in history, but also a cross-section of society which includes many of the era’s most notable names.”

My hope and prayer is that the modern day Free Church will include that wide cross section of society – yes including the Lords and Ladies and the Culture gatekeepers, but included as human beings made in the image of God, not rulers and elites self-made in their own image.  I think the Free Church lost its way in the 20th Century and began to believe our own caricature – that we were a small group of insignificant highlanders – a quaint Brigadoon remnant from the past – the kind of group that those who were at the Tate last night could patronisingly dismiss. Maybe we played along with that too much. We need to get back to our radical and biblical roots.  We need to be proclaiming the Gospel across every area of society and challenging the powers that think they are to submit to The Power that really is, and from whom all their power is just a pale derivation.  Rather than welcoming the poor and identifying with the rich we should identify with the poor and welcome the rich.

“5 Listen, my dear brothers: Has not God chosen those who are poor in the eyes of the world to be rich in faith and to inherit the kingdom he promised those who love him? 6 But you have insulted the poor. Is it not the rich who are exploiting you? Are they not the ones who are dragging you into court? 7 Are they not the ones who are slandering the noble name of him to whom you belong?”