I have watched The West Wing many times – it is still by far my favourite TV show – the characters, script, acting and directing are all superb.  Yes, it has its faults – not least the ridiculous ending (a kind of liberal progressive fantasy) and its lack of reality on certain issues – like China, economics and perhaps most of all, abortion.

There are atheists and liberals (like Christopher Hitchens) who have a bit of logical consistency and are opposed to abortion – but they are few and far between. There is a collective disease within the body politic which seems to take away people’s rationality and basic human compassion.   The West Wing seems to think that if you are opposed to any form of abortion there is something wrong with you…here for example is President Bartlett doing his Biden’ like act of a President who professes to be Catholic, but certainly won’t let his Catholic faith get in the way of ‘progressive’ policy.  Think Premier Dan Andrews of Victoria as well.  The good Premier is prepared to send parents to jail for ten years if they refuse to allow hormone therapy for their confused trans teenager – but happily advocates the right to kill your own child in the womb.  Meanwhile is a supreme irony the Victorian government are going to issue certificates to parents whose children are born prematurely or die in the womb – recognising their grief at having lost a child in the womb!

I remember when I first heard of partial-birth abortion – I thought it was a spoof – or something from a horror film.  Even to describe it is enough.

“The procedure in question is properly called “partial-birth abortion” because, it requires the doctor to deliver the unborn child partially from the uterus, feet first, leaving the baby’s head inside the womb. The doctor then uses scissors and a hollow needle to empty the skull of its contents. The unborn baby’s head then collapses and the doctor removes the dead baby entirely from the mother’s body.  Given the nature of the procedure, the congressmen who drafted legislation to prohibit it, the “Partial-Birth Abortion Act of 1995”, defined the procedure as follows: “an abortion in which the person performing the abortion partially vaginally delivers a living fetus before killing the fetus and completing the delivery”.

Partial-birth abortion was banned in 2007 – after Bill Clinton had vetoed a previous attempt.    It has now been replaced:

“In response to this statute, many abortion providers have adopted the practice of inducing fatal demise beginning late-term abortions. Typically, a solution of potassium chloride or digoxin is injected directly into the fetal heart using ultrasound to guide the needle”

Language is important.  Partial-birth abortion is a form of infanticide (something which Peter Singer calls post-birth abortion).    The idea that being pro-abortion is being ‘pro-choice’ is also grotesque and illogical.  Firstly there is no choice for the child involved, nor (usually) is there any choice for the father.   Secondly, those who advocate ‘choice’ seek to prevent it being a real choice.  They do not give adequate information to enable people to make an informed choice.  Think of the teenage girl who is pregnant, alone and terrified being told by her doctor and social worker – ‘don’t worry it’s only like having a wart removed’!

If people are really pro-choice then they should want those who make the choice to have the most information.  In order to make an informed choice they should know what an abortion actually is and what it involves.  I would suspect that the easiest way to reduce the number of abortions would be to give counselling beforehand which shows what an abortion actually is – maybe give everyone the option of seeing a video?   But that is the reason why none of the media will ever show an abortion in all its horrific detail.  You can watch all kinds of violence against human beings – including beheadings – but abortion – never! 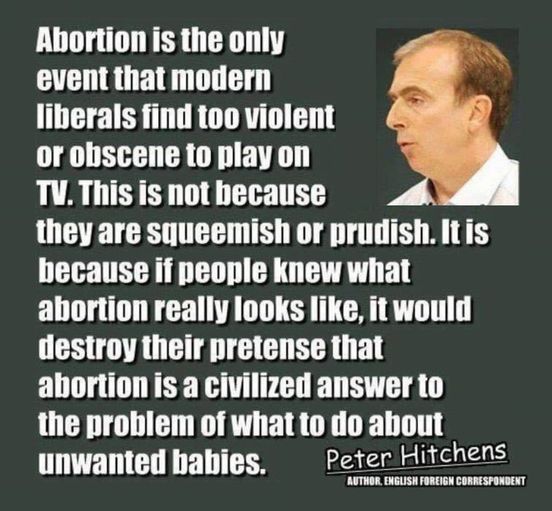 Just think – this week President-Elect Joe Biden appointed California Attorney General Xavier Becerra to be the next secretary of the Department of Health and Human Services.  Becerra is an extremist abortion proponent who believes that Christian hospitals should be compelled to provide abortions and who has supported partial-birth abortion and defended Planned Parenthood’s sale of aborted baby body parts.  For those who think that the US is moving back to being a part of the civilised world after four months of Trump darkness, perhaps you should think again?   Maybe the US is moving out of the frying pan into the fire?

I don’t care about the politics – but killing babies in the womb is just flat out evil.  It is incomprehensible to me that any Christian could have voted for that.  If you thought that Biden would be a moderating influence, this one appointment has put paid to that.  You were suckered.   And don’t give me that nonsense about ‘one issue’ politics, or the excuse that Trump was just anti-abortion for electoral advantage.  You wouldn’t vote for a candidate who was an out and out racist (I hope) – even if you agreed with them on many other issues and liked them more than the other guy. Why is abortion less important?  And of course Trump, who was pro-abortion and supported Clinton, is now only anti-abortion for electoral advantage.  I don’t doubt he is a hypocrite.  But he never made this kind of appointment.  If you voted for Biden you are partially responsible for enabling that.   Maybe some will argue – he was the lesser of two evils.  That’s a big call.  Is there a greater evil than slaughtering the weakest and most defenceless?    The idea that killing one’s own child is a human right is from the very pit of Hell.

I hope and pray that one day in the future we will look back on the West’s obsession with abortion as a human right as just as absurd and immoral as the defence of slavery.

(By the way I am not saying that abortion is the ultimate sin – like all sin it can be forgiven.  I know of people who have had abortions or been involved who now recognise it was wrong and have repented and received forgiveness from Christ.    Nor am I prepared to justify those who are against abortion but don’t support mothers who struggle.  Nor is it the case that abortion is never in any circumstance justified – there are a few – very few – rare exceptions where abortion may be the lesser of two evils – just as there are a few instances where it may be right to kill an adult.   But those very few exceptions should not be used to justify the 99.99% of abortions that are always the greater evil. )