This weeks Christan Today article – with the title they gave….

Will the West abandon Armenians like they did Iraq’s Kurds and Christians? 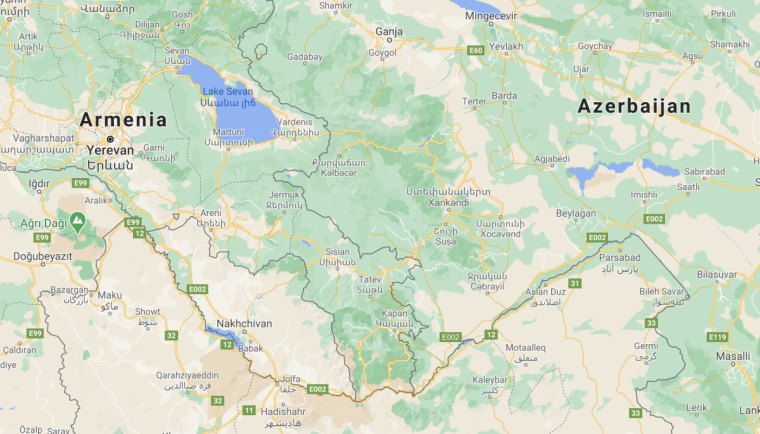 (Photo: Google Maps)
It doesn’t really matter does it? Write a column about Joe Biden’s dog or Donald Trump’s tweets, or the latest church leader to resign for ‘personal reasons’ and it seems that Christians will lap it up. Or perhaps something more personal? How to make money? Have a better relationship? Deal with your inner demons? But why should anyone really care about what is happening in a seemingly far-off region in the South Caucasus? A renewed war in Nagorno-Karabakh is hardly worth a second glance for any who are not directly involved – is it?

Well – yes, it is. There are many reasons why Christians especially should be concerned about the hostility between Azerbaijan and Armenia over the area of Nagorno-Karabakh. Allow me to explain why.

Nagorno-Karabakh is an area within the country of Azerbaijan with a population of some 170,000 people, the majority of whom are Armenians. For the past three decades it has been an autonomous region calling itself the Republic of Artsakh. This is part of a centuries old conflict between the Islamic, oil-rich country of Azerbaijan and the smaller Christian country of Armenia.

For the past few weeks Azerbaijan has attacked Nagorno-Karabakh and after a successful campaign, supported by Turkey, a ceasefire brokered by Russia has been signed which has resulted in the conquered areas being ‘returned’ to Azerbaijan. So why should we be concerned?

Firstly, because all wars create death, disease and destruction. As Christians we want ‘wars to cease, and peace on earth’. It is estimated that more than 2,000 civilians and soldiers have been killed in the latest outbreak of fighting.

Then there is the fact that Armenia was the first nation in the world to officially adopt Christianity as the state religion (in 301 AD). The tradition is that the Armenian Apostolic church was founded by two of Christ’s apostles, Thaddeus and Bartholomew. The church has remained for the past 1,800 years.

Armenia itself only has a population of three million but there are millions of Armenians spread all over the world – here in Australia where I live there are around 50,000. Russia has 2.5 million, the US 400,000. Famous people with Armenian heritage include Andre Agassi, Cher, Steve Jobs, Garry Kasparov, Alain Prost, Kim Kardashian and Gladys Berejiklian, the New South Wales Premier.

Armenians have also been successful in business, medicine and academia throughout the world. The reason for this diaspora is because of the genocide committed by the Turks between 1915 and 1920 when between 1 and 1.5 million Armenians were slaughtered. The word ‘genocide’ was first used by a Polish lawyer in 1943 to describe what happened to the Armenians. Today it is such a sensitive subject that in Turkey, it is illegal to use the term to describe the massacres.

Which brings us back to why we should be concerned about this latest war. In 2018, President Erdogan of Turkey met with President Aliyev of Azerbaijan and promised to help him retake Nagorno-Karabakh. With the West and Russia losing interest, Erdogan struggling with the economy at home, and Azerbaijan being cash rich because of oil, they took the opportunity. With the help of Turkish planes, and a Turkish foreign legion consisting largely of Syrian Jihadis, the Azerbaijanis had a quick victory – which was only stopped when Russia brokered the peace deal.

The whole situation is not resolved and indeed is very dangerous. Erdogan has been emboldened by his success. Turkish newspapers speak of ‘victory in the Caucasus’ and how, for the first time since the Ottoman Empire, the Turks have been able to free ‘Muslim’ lands from the ‘infidels’.

The Turkish Parliament voted to let Erdogan send Turkish forces to Azerbaijan after the ceasefire. There are reports that Erdogan is sending families from the areas of Syria that Turkey has occupied, in order to populate the conquered areas of Nagorno-Karabakh – where the local population have fled. Even more destabilising is that Erdogan has already said that he wants to use his Muslim Brotherhood militias to ‘liberate’ more Muslim lands such as Dagestan, Chechnya and to wipe out Armenia and replace it with the Iravan Khanate.

In another little heralded development, the result of this short war is that Iran has lost its border with Armenia and once again has Russia, in the form of peacekeeping troops, as a neighbour. The whole area is a powder keg.

This affects the West because Erdogan is using a lot of anti-Western rhetoric and supporting a group called the Grey Wolves – a Turkish nationalist group named by the EU as a terrorist group – who want to see a Turkish empire stretching from the Balkans to Central Asia.

We never seem to learn. The Prime Minister of Armenia, Nikol Pashinyan, was encouraged by the EU, UK, USA and NATO to loosen Armenia’s traditional ties with Russia and adopt a more Western democratic approach. But when he was attacked and asked for help, we did nothing. The secretary general of NATO even stated that “NATO is not part of this conflict, Armenia and Azerbaijan are both allies of NATO”.

It appears as though the West is prepared to encourage change in volatile regions like the Middle East, and then, once we have no further use for the ‘enemies of our enemies’ we abandon them – witness what happened to the Kurds and the Iraqi Christians. This has had dreadful consequences for the Christian minorities in these areas.

I have been speaking to Armenian friends here in Sydney and they are distraught. Little wonder. There have been videos of killings by Azerbaijani soldiers, the torture of captured Armenian soldiers, and the desecration of centuries old churches and monasteries – with the cries of ‘Allah Akbar’ ringing out from church steeples.

Doubtless there will be tales of Armenian atrocities and cruelty – war brings out the worst in all peoples – but no amount of ‘whatabouterry’ should cause us to shrug our shoulders and walk on by. We must at least speak up for those who cannot speak up for themselves. Our church leaders seem able to speak on many issues with ‘moral’ authority and certitude. I hope they remember that Armenian lives matter too (and Azerbaijani).Pray for our brothers and sisters in Armenia. Pray that the ‘peace’ will last. And pray that those who seek to enforce their religion through war would be stopped.