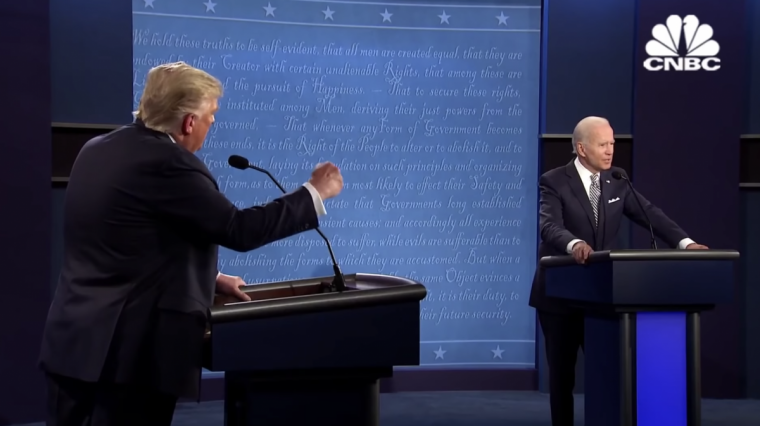 Recently I was sent a copy of a statement from an organisation calling itself Pro-life Evangelicals for Biden. This appears to be connected with a larger group called Evangelicals for Biden. I was surprised not only to receive it, but also to see who some of the signatories were. As far as I could see, it was not paid for by the Biden campaign, and so in this way differs from the Evangelicals for Trump group, which is funded by the president.

The common understanding is that the vast majority of white evangelicals (80%) voted for Donald Trump, although that all depends on who you consider to be evangelical. There is no doubt that President Trump and his team consider evangelicals to be vital to his campaign – and therefore they have become a target for both campaigns. If there is now a significant group of evangelicals, never mind Catholics, who are considering changing their vote, this would indeed be a game changer.

That is why the Guardian, amongst other media, are so thrilled to make this a major issue – bear in mind that when media become as partisan as the Guardian and CNN on one hand, and Fox on the other, headlines are often wish projections rather than news!

But I wish to make no comment on the politics involved here – I would say a plague on both your houses but that might be misunderstood!

In the great Kingdom of God scheme of things, the politics are relatively unimportant. What really matters is the state of the Church. In 1984, just before he died, Francis A Schaeffer published a book called The Great Evangelical Disaster which argued that Christians had so deserted the Bible that they were heading for a disaster. The abandonment of Scripture was the disaster, but that would lead to further disasters as the Church was set on a downhill slide – especially in the USA.

Schaeffer was a prophet. Not only was his analysis of the culture correct, his predictions about the future have largely turned out to be right as well.

I thought of that title when I read the various competing propaganda from the Evangelicals for Trump/Biden groups. If these groups are representative of American Christianity, then the Church has already been defeated. Why is that the case? Is it wrong for individual Christian leaders to support a political party or candidate? Of course not. We too are citizens. But we are also citizens of another kingdom and when we start confusing the two – claiming, or creating the perception, that the good news of Jesus means he is endorsing one or other of the candidates – then a line has been crossed.

The trouble with much of the Church in the US is that it now sees itself no differently from how the Guardian and other mainstream secular commentators see it – a political bloc. About the same time as Schaeffer was writing his book, yours truly was deeply involved in student politics at the University of Edinburgh. I recall one particular student association meeting where over 150 members of the Christian Union turned up – a normal meeting usually only had a couple of hundred attendees.

I was asked by a political colleague afterwards about the size of the CU. When I told him it was 300, he thought I was about to become one of the most powerful (and disruptive!) figures on the student political scene. Imagine having a bloc vote of 300 people! I told him that that would never happen because, first of all, Christians did not all think the same politically and we did not vote as a bloc, and secondly I would never ask Christians to do that – because it would confuse the kingdom of God with the kingdoms of this world and I wanted Christians to follow Christ, not me in my (short-lived) political career!

I was aware that there were ‘progressives’ in the churches who didn’t believe the Gospel and who had no qualms about associating their politics with Jesus, but my first inkling that my separation of church and politics was not shared by all the evangelical world was when I visited the US. I came from a country which had an official church state, and yet where there was little identification between church and politics, to one where there was official separation, but great identification (and confusion!). Since then I have come to realise that for some evangelicals, the equation of Christianity with one political view or party, is an obvious one. The perception is that there is an evangelical bloc vote, and even more disturbingly that evangelical leaders can, and should, tell their people how to vote. This is a disaster. Why?

Firstly, it gives church leaders political power. And where there is that kind of power, there is also money. When you combine the two, you inevitably end up with corruption. Although there are many fine American churches and church leaders, there have been far too many who have given into the temptation and see themselves as some kind of political power broker.

Secondly, it makes the proclamation of the Gospel more difficult because the Gospel inevitably gets associated with one party or another. At the time of the Iraq war, I was in a meeting of American mission leaders who were working in Europe. One of them, working in a central European city, came up with an idea to reach out to the people of that city by holding a series of talks on ‘just war theory’. He thought it would show the Church was contemporary and had something to say to the modern world. I suggested such an approach would be a disaster. Why? Because America had just invaded Iraq. An American missionary holding a talk about just war would be perceived as a justification for that action. Sure, perhaps 50 per cent of the population might agree, but the other 50 per cent would be alienated and thus his potential audience for the good news of Jesus would already be reduced by half.

The trouble with both ‘evangelical’ groups is that they do not add to the evangel or its relevance. They take away from it. Let individual leaders make their own case as private citizens, but please let’s not have Jesus endorsing anyone. When I see a particular evangelical leader endorsing a political party or candidate on behalf of the evangel, it immediately means that I am extremely wary of supporting their ministry or organisation. That is not our calling.

Thirdly, these kind of ‘evangelical’ political groups divide and polarise the Church. They set up a dividing wall of partition.  After all, if Jesus is endorsing your candidate and you are proclaiming that as part of the good news, then those who don’t support your candidate can’t be following Jesus all that well!

One argument that is made is that ‘Jesus would endorse our guy, because the other one is so bad’. I heard one evangelical for Biden argue that evangelicals only voted for Trump because they were scared of what liberal progressives would do. He correctly challenged them to trust Jesus but then blew it by saying that Trump was so bad that evangelicals should vote for Biden! He was an intelligent man, but clearly was unaware of the illogicality of what he was saying. Indeed far too many evangelical leaders, drunk on the intoxication of perceived power, seem to have fallen into that trap.

If I was an ordinary, intelligent, non-Christian citizen, I would be tempted to regard any church leader’s endorsement of a particular candidate as a reason to not vote for that candidate. Likewise, ordinary intelligent Christians should tell any church leader who seeks to influence their vote that they can think for themselves and don’t need someone whose calling is to proclaim the Gospel, telling them how they should vote. Sure they can tell us what they would do – just don’t tell us that Jesus would do the same as them.

The identification of Jesus with party politics is the great evangelical disaster. It has compromised and crippled the evangelical witness and the name of God is blasphemed amongst the Gentiles because of you! This has an impact on the wider worldwide Church, not just in the perception of evangelical Christianity it creates, but because American Christian media (sometimes funded by those who have strong political interests), is incredibly wealthy and thus able to spread its message and ethos throughout the world. He who pays the piper calls the tune.

“I urge, then, first of all, that petitions, prayers, intercession and thanksgiving be made for all people – for kings and all those in authority, that we may live peaceful and quiet lives in all godliness and holiness. This is good, and pleases God our Saviour, who wants all people to be saved and to come to a knowledge of the truth.” (1 Timothy 2:1-3).