I am grateful that Christian Today have published this column – it won’t be popular from both sides of the culture wars but I think it is true and essential to understand what is going on.

The greatest threat to American democracy is not Trump 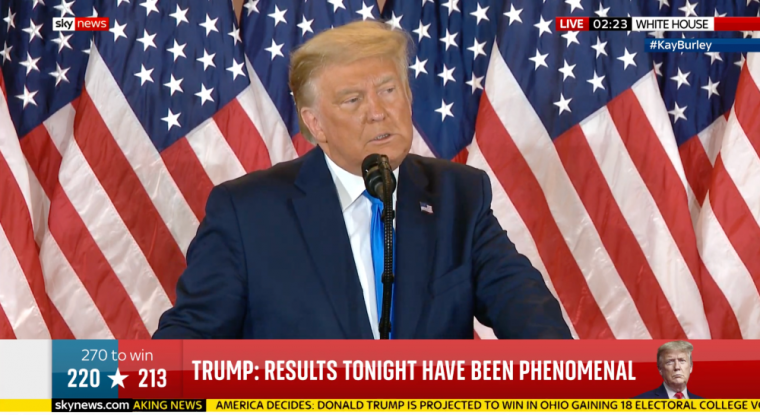 The world watched in disbelief last week as a mob stormed the Capitol building in Washington. For President Donald Trump who at first urged the crowd to march on the building, but later asked for non-violence, it was a disastrous end to his presidency. For his opponents, it has been an absolute gift. Not only do the Democrats have the new President, but they now have the House, the Senate and the ‘moral authority’.

For the progressive left, President Trump’s eccentric, narcissistic, unstable behaviour is the gift that keeps on giving.

The Capitol riot of course makes great TV and has, as expected, resulted in hyped headlines and commentators’ hysteria. This was a “coup”, this was an “insurrection”, this is the greatest threat to democracy since Hitler. One commentator pontificated on the BBC that this was a more serious breach of security than 9/11! For those inclined to see Hitler under every conservative stone, this is an opportunity to hyperventilate your outrage and demonstrate your determination to be the hero who is fighting ‘fascism’.

In reality, the whole thing was more farce than revolution. This was no attempted coup. President Trump behaved in an appalling manner, hyping up his more eccentric conspiratorial supporters, with the result that some of them went beyond all decent norms, people were killed, and America was made a laughing stock. He should be held to account for his behaviour.

Despite all this though, Trump isn’t actually the greatest threat to democracy. Indeed the reaction to the event is a far greater threat to democracy than the event itself. And that is something that should greatly concern the Church, because we will inevitably be caught up in the backlash.

Hysteria breeds fear: people who did not bat an eyelid when Antifa/BLM riots after the death of George Floyd led to 47 deaths, 700 police injuries, and up to $2 billion worth of damage to property and shops are now telling us that what happened is the beginning of the end and the biggest attack on American democracy since Pearl Harbour.

Arnold Schwarzenegger compared Capitol Hill to Kristallnacht in 1938. Let’s compare the numbers shall we: in that event hundreds of Jews were killed, 30,000 were arrested and sent to concentration camps, and 7,500 Jewish buildings were burnt and destroyed. The comparison is hyperbolic nonsense.

There is, however, another comparison with the Nazis that is more relevant: the Reichstag fire of 1933. In 1933, a Dutch communist, Marinus van der Lubbe, set fire to the German parliament. This was used as an excuse to eventually pass an Enabling Act “to protect the German People and State”. In reality, it paved the way for Nazi totalitarianism. In a similar manner, I suspect that Donald Trump and the Capitol Hill riots will be used by big government, big tech and the ‘progressives’ to clamp down on the basic freedoms that have been the backbone of American democracy – freedom of speech, freedom of assembly and freedom of religion.

Where this is going can be seen in the concerted move by the oligarchs of Silicon Valley not only to ban Donald Trump from Twitter, Facebook and other platforms, but to also seize the opportunity to get rid of one of their potential rivals, Parler. This is profoundly dangerous – as numerous non-rightwingers like the French, German and Australian governments have pointed out.

One French minister told Bloomberg TV: “This should be decided by citizens, not by a CEO. There needs to be public regulation of big online platforms.”

Another said that the digital oligarchs were a threat to the State and to democracy. Angela Merkel warned that the Big Tech firms should not have the right to determine who has the right to free speech.

Russian opposition leader Alexei Navalny warned that Twitter’s blocking of Trump puts dissidents like him in danger. Why? Because dictators the world over will see Big Tech’s dictatorial behaviour as a justification for their own suppression of opponents. If America, ‘the Land of the Free’ can do it, then why shouldn’t they?

This is even more worrying when you read the two Tweets for which Trump got banned.

“The 75,000,000 great American patriots who voted for me, AMERICA FIRST, and MAKE AMERICA GREAT AGAIN, will have a GIANT VOICE long into the future. They will not be disrespected or treated unfairly in any shape or form.”

“To those who have asked I will not be attending the Inauguration on January 20.”

Now these tweets may be badly worded, egotistical and wrong, but are they worthy of a lifetime ban? Especially when you bear in mind that Twitter permits the Chinese communist government to defend the Uighur genocide, or the Ayatollah Khamenei to advocate the total destruction of Israel, never mind the numerous tweets that have called for violence against Donald Trump!

Even more disturbingly Donald Trump was banned on the basis that these Tweets “might” incite violence, not that they actually did – unlike the Left-leaning online magazine Slate which tweeted, “Non-violence is an important tool for protests, but so is violence.”

Apparently, an incitement to violence is acceptable if it is the right kind of violence for the right cause.

The hypocrisy is even worse. Apple, for example, banned Parler for not removing threats of violence quick enough yet lobbied against a bill that wanted to stop forced labour in China (something from which they benefit). In other words, making comments which might be taken as an incitement to violence in the US is worthy of a ban, but actual violence committed against Muslims in China is fine!

These companies have enormous power because they have a virtual monopoly – and one in which they are free, under Section 230, from the legal consequences that other publishing companies have to face. They get away with this because they claim that they are not publishing companies responsible for what they publish. But now they are acting like publishers, censoring and determining their own context, according to their own politics.

Why should Californian billionaires like Jack Dorsey of Twitter or Mark Zuckerberg of Facebook get to determine whose views we hear? Especially when their companies are not neutral but real political players. More than 80% of money donated from these companies went to the Democrats. Big Tech silenced negative stories about Joe Biden. There is no doubt they wanted him to win – because they feared that their Section 230 protection from liability would be removed. Biden has made noises about reining in Big Tech but I doubt that in reality it will happen.

The Big Tech companies have now got a taste of lawless power – and they will use it. TalkRadio, for example, was removed from YouTube because they had someone who dared to question the efficacy of lockdown.

YouTube will also ban any video that says the 2020 US election was fraudulent. On the other hand, if you wish to post about how the election of 2016 was fraudulent and stolen by the Russians, go ahead!

It is not hyperbolic to point out that this is indeed a very dangerous time for democracy in the US (and therefore democracy for the rest of us). I’m not worried about the Church; we have survived and thrived under authoritarian regimes before. But this is not about us. Democracy is best for our societies, and we want the peace and prosperity of our societies – especially for the poor. We need to be informed, we need to be watchful and above all we need to pray.