You would think that with the current Covid crisis the Scottish government would have enough to do without adding to its workload. They seem to agree – after all they are unable to publish the report into the state of Scottish education until after the next Scottish election – because of the Covid crisis.  However they still have time to remove the centuries old blasphemy law and replace it with a hate speech law – i.e. another blasphemy law.

The Hate Crime and Public Order (Scotland) bill is to be put before the Scottish parliament.   It will abolish the offence of blasphemy but will add age (and eventually sex) to the protected characteristics of disability, race, religion, sexual orientation and transgender identity.

Abolishing the blasphemy law means nothing.   It is many years (178 to be precise) since it was last used and is in effect a non law.

Does it make any difference if it is removed? Not really. But what is it being replaced with?   The Justice Secretary Humza Yousaf reacted fiercely when he was accused of introducing a new blasphemy law. 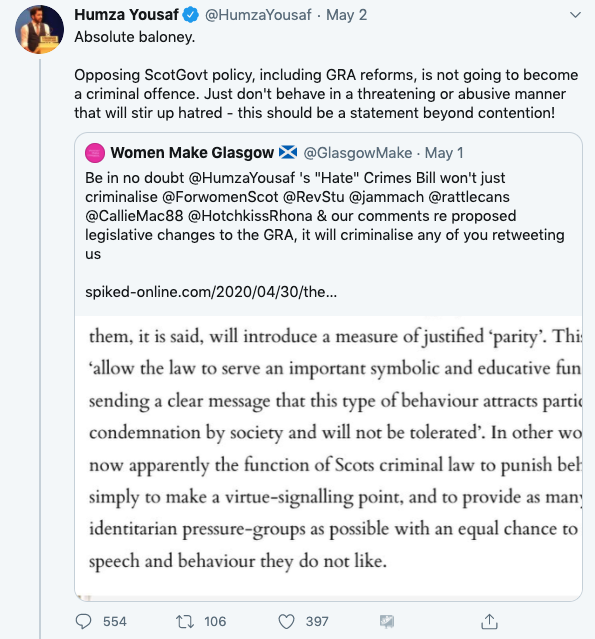 I find his tweet one of the most disturbing that I have read from a politician in a long time. He accuses a Glasgow women’s group of ‘absolute baloney’ when they suggested this could lead to their views on the Gender Recognition Act being criminalized.   And then goes on to make the incredible remark that as long as we don’t ‘behave in a threatening and abusive manner that will stir up hatred’ we won’t be breaking the law. He is apparently unaware of two key implications of his statement.

Firstly who defines what a ‘statement that stirs up hatred is’? I think Mr. Yousaf’s accusation against the Glasgow women is abusive and stirs up hatred (cue the Cybernats pile on with their abuse) – does that mean it should be banned under the new blasphemy law? Of course not –because a High Priest of the State cannot blaspheme against it!

Secondly his law is so vague (at least the blasphemy law it replaces was quite specific) that it will be used by the governing elites to protect the views they want protected and to silence those who disagree with them.   Will the Justice Secretary prosecute the nationalist supporters who carried a banner urging that all Tories be booted out of Scotland? Is that not stirring up hatred against a group?   What about militant atheist groups – such as this beauty that was posted in public from the Scottish Secular Society – “I hate organised religion, but boy, I sure do hate you more!” Garry Otton – Founder of the Scottish Secular Society.   Does that not constitute hate speech? And would it be prosecuted? What about comedians like Billy Connolly mocking religion? Or does that only apply if he dared to mock Islam?

Let me demonstrate the lie behind Humza’s tweet that it is absolute baloney to say that if you disagree with the GRA you will end up being criminalized. I can offer direct proof of the opposite. I was asked by the Scottish government to give evidence to two civil servants who were drawing up the legislation on the GRA. After attempting to persuade me to change my mind and to accept it they then changed direction and asked ‘what are you looking for in this?’ I said that I knew that the ‘consultation’ was a sham because the government were going to pass it anyway, but I wanted three things – 1) for it not to be taught in schools; 2) For there to be protected characteristics for women (including sport, refugees and prisons) and 3) That I wouldn’t go to jail for saying that men cannot become women.   What astounded me was that it was the third one that they took most seriously and said would be most difficult. If the law said that a man who said he was a woman was a woman, then for me to deny that he was would be a crime.   I would be required to deny, not my faith, but science and biology, because the law says that to affirm biology would be a crime.

And then Mr. Yousaf posted this. 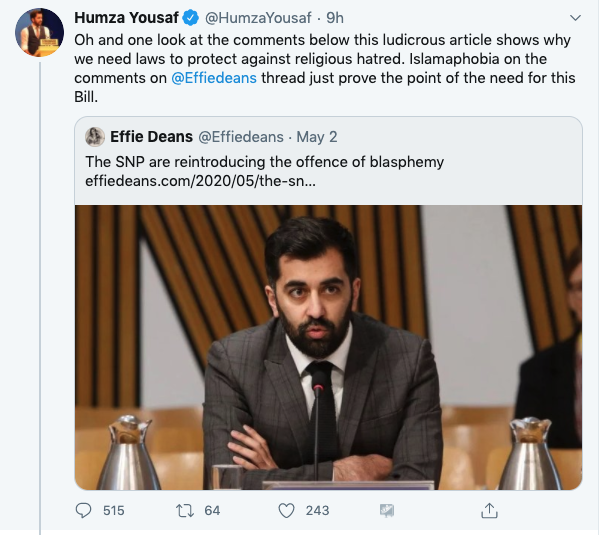 So I went and read the tweets he said justified his new law.  Most were fine. Some were dumb. And some were abusive – (but far less so than many tweets I have received from militant secularists and cybernats and not a few ‘Christians!). But were any of them illegal? Were any inciting violence? It may not be true, but is it a crime to state that Islam bans criticism of Islam? It’s an ignorant and dumb comment to say that London is a Muslim caliphate but should it be a crime? What if someone complained about the Tartan Taliban and suggested that Lewis was run by a Calvinist Caliphate – should that be a crime? Will SNP MP  John Nicholson  who argued that Lewis was run by a Tartan Taleban be prosecuted?  I had ma doots!

What if I want to argue that gender is not a social construct and being a woman actually has something to do with biology; that the Koran is not the Word of God and its ok to critique Mohammed; that abortion is taking a human life; that marriage between a man and a man is not real marriage?   Will I be breaking the new blasphemy laws in making any of those comments?

The fact is that the law is generally not needed in any of those instances – the Twitter mob, the mainstream media, the Corporate moralists and the State thought police will usually ensure that you are banned anyway. – And in this Brave New World that even applies to historic ‘hate speech’.  Witness the news this week that Oxford University Students Union passed a motionasking the University to reject any ‘hateful’ material being used in academic courses.   And again we are back to who gets to define what is ‘hateful’? It will inevitably be the middle class elites from the elite Universities and the politicians who will do that on behalf of the rest of us.

The Race to the Bottom

Humza Yousaf is just taking this one chilling step further. Whilst it is true that this is going on in the rest of the UK, it appears that the Scottish Government are determined to win the race to the bottom that our increasingly illiberal ‘Progressives’ are taking us.

Welcome to the secular Nirvana of ‘Progressive’ Scotland. It will not be long before witch-hunts against those who oppose the State ideology are set in place.   I think of the church that has been banned from meeting in its premises because of political pressure – simply because they hold to a Christian view of marriage. Or the time I was banned from the BBC for using the phrase ‘Britain’s Christian traditions’ because the producer was concerned that someone somewhere would find it offensive. Or the threats to charities that don’t sign up to the States new morality. Or the hints made to a leading Scottish newspaper by an activist threatening government defunding if they did not post his line.  Or the debacle and intolerance surrounding the banning of Destiny church. And numerous more examples.

And let’s ask Humza Yousaf one more simple question. The last person to be prosecuted (178 years ago) under the old blasphemy law was an Edinburgh bookseller Thomas Paterson who advertised amongst other things ‘that the Bible and other obscene works not sold at this shop’.   Lets bring this up to today. Under the new law would an Edinburgh bookseller be free to advertise ‘the Koran and other obscene works not sold at this shop’?   I think Paterson was wrong then and a bookseller would be wrong and unwise to do that today – but if Mr. Yousaf’s law means that such a bookseller would be prosecuted then we have ended up in a far worse situation now than we have been for the past 178 years. Because we now have a blasphemy law which will be enforced. And the blasphemy is not against God, but against the Holy State and whatever it decides is ‘hateful’ (i.e. against their values). The SNP have form on this.Ian Blackford once declared on Radio 4 that true Scots were those who accepted Scottish (i.e. Scottish Government) values. The rest of us are excommunicated Ron our Scottish citizenship.

The North Korea of Europe?

Mr. Yousaf greatly puzzles me. From what I know he seems a perfectly reasonable and humane individual.   But he either does not have the intelligence to work out where his new law will lead, or he does and is deliberately leading us down this authoritarian rabbit hole?

Scotland is heading towards becoming the North Korea of Europe – with a state propaganda system, educational indoctrination, an economy where many of the top jobs 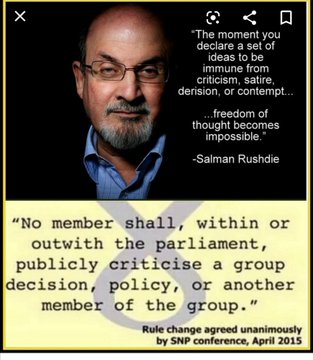 are dependent on the State, a largely subservient acquiescent populace,  a one nation State police determined to police thought and social engineering as well as the law, and a legal system enacting blasphemy laws against those who go against the State ideology.

Of course it’s an exaggeration to claim that Scotland is becoming North Korea but like all caricatures there is a disturbing element of truth within it. Only the handful of politicians who see the danger and are prepared to stand up to it, a few free thinkers (including secularists); and above all a free press (for how long) and the churches (at least those that have not sold their soul and become the de facto secular priests of the new State) stand between freedom and the Progressive’s dream of an authoritarian state made in their own image.  Those who do not cherish and defend their liberty will lose it.

These articles are below are an example of an earlier encounter with how the Scottish police enforce hate speech laws.