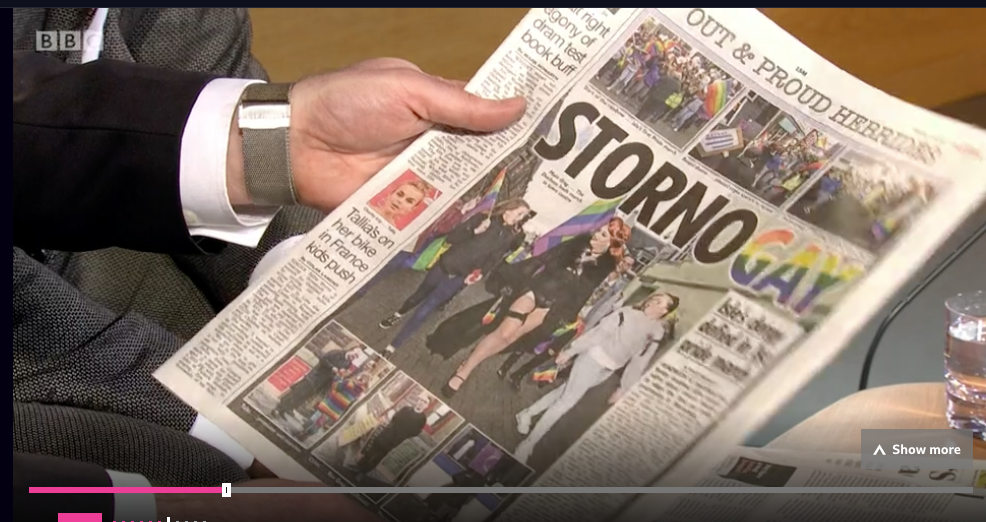 John Nicholson an SNP leader and former MP showed just what the new campaign of tolerance, respect and love means for the SNP and Scottish Government when yesterday on the Andrew Marr show he referred to Christians in the Western Isles as ‘the Tartan Taliban’.

For those who are not able to access the BBC Iplayer through the link above here is a transcript of his remarks.

This is a man in suspenders walking through Stornoway….Stornoway is not a place where men wear suspenders. …(at this point Andrew Marr said that it was staunchly Free Presbyterian  – not quite accurate –  to which Nicholson responded.)

…some  refer to them as the Tartan Taliban…it is a place of dour Presbyterianism….very good values…strongly Christian place…but also tinged with intolerance historically…so the idea that you have a gay pride march through Stornoway is just kind of mind-blowing for anyone who knows the islands.  It just shows how much Scotland has changed and how welcome that change is…

Mr Nicholson’s remarks betray an ignorance and prejudice which belies his parties claim to be the campaign of tolerance, equality and inclusivity.  As their poster campaign indicates this inclusivity is quite exclusive, its tolerance intolerant and its equality is only for some.   To use the stereotype of ‘dour Presbyterianism’ is lazy bigotry.  I suggest he read Alaister McIntosh’s Poachers Pilgrimage in order to educate himself how to speak respectfully about islanders he disagrees with.   It was a discriminatory and prejudiced remark which, under their own dumb criteria, should be reported to Police Scotland as a ‘hate incident’…but I can’t be bothered.

I would also suggest that he read up about the real Taliban.  Then he would realise that they perhaps have more in common with his party than the good Christians of Lewis.  The Christians are not planting bombs, killing people, oppressing women or killing homosexuals. Neither are the SNP but the Taliban are also a fundamentalist nationalist political movement in Afghanistan – fighting to liberate their country from a bigger nation.   They don’t tolerate any deviation from their ideology and they speak of being part of a wider international movement which they think will take over the world.  They believe they are the ones on the ‘right side of history’.

When it comes to intolerance in Scotland it’s not the good people of the Western Isles, (who have their beliefs but have always shown kindness to those who disagree), but the Cybernats who are the most abusive.   John Nicholson may mock the traditional Christians who have made the island what it is, but they are not the ones threatening violence or using abusive and intolerant language.  What about the Scottish National Liberation Army?  Or Settler Watch – remember Sonja Cameron the racist anti-English campaigner who was expelled from the party and a couple of years ago readmitted?   Mr Nicholson should.

I have just listened to Humsa Yousaf, the Justice Secretary,  speak to the SNP Rally/Conference in Glasgow.  It was all the usual sound bites and telling us what a wonderful place Scotland is because it is governed by one of the most progressive parties in Europe.  The justice secretary urged the followers to celebrate our diversity – immigrants, gay people, downs syndrome, the Catholic community and women – misogyny is to be made hate crime.   All of course cheered to the rafters.  All wonderful stuff – but let’s go a bit deeper.   If you want to support people with Downs Syndrome why do you want to make it easier for them to be killed in the womb?  If you are so pro-Catholic do you accept Catholic teaching that SSM is wrong and sinful and abortion is murder?  Why is it impermissible to make jokes about Glasgow Catholics but permissible to do so for Lewis Calvinists (just the number of votes)?     If misogyny is to be a hate crime, what about misandry?  Is it ok to hate men?

Mr Yousaf said “Every EU national in Scotland know this, that Scotland values you and your families and we will continue to fight for your rights”.    Excellent.  I would hope this would apply to people from other countries as well.  And also those from Scotland.  Perhaps the justice secretary can say to those of us who are Christians that Scotland

values us and our families and will continue to fight for our rights?    The Conference has just had a speaker condemning the Tories for making Britain hostile to migrants.  What about the Scottish government and the State Police making Scotland hostile to biblical Christians?   I feel as though I am an alien and a stranger in my own country.  I am as welcome as a Tory would be at the Glasgow Rally.    My views are despised and mocked by those who pride themselves on how tolerant and diverse they are.    They don’t engage with these views because they don’t engage.   It’s all emotion, feeling and identity politics.

They keep talking about ‘where we are going being more important than where we are from’.   But what about those of us who are not going where this new Progressive SNP is going?  We  who don’t want to regress down the progressive route that the SNP are determined to enforce upon us.   Does that mean that we are not Scotland?  Even if we are born here, bred here, educated here and have spent our lives serving here?

What depresses me almost as much as the intolerance is the shallow, superficial and demeaning criteria used for progress.   John Nicholson thinks that a man parading in suspenders down the streets of Stornoway is ‘progress’!  I think it is demeaning and shameful.  God have mercy.

How should the Church React to Inverness and Stornoway Gay Pride marches?