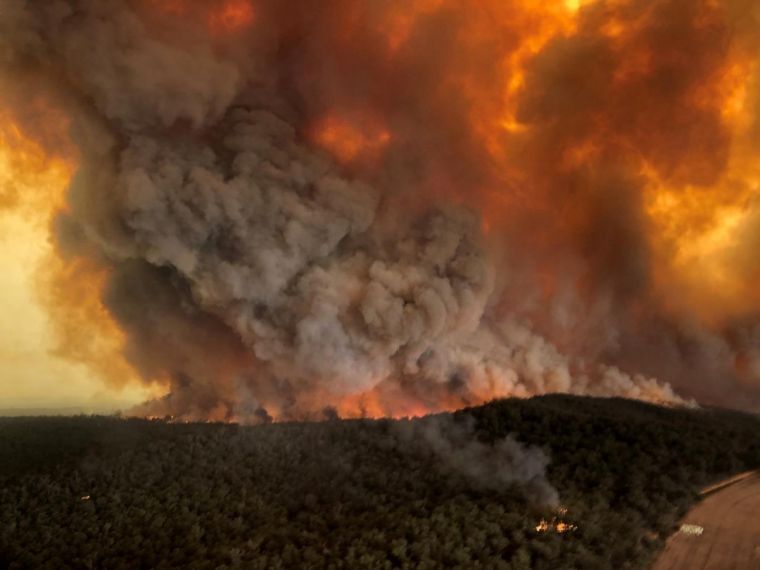 Last week, we looked at what is going on in Australia and tried to establish some of the facts as to what and why.

This week, I want to reflect on things ‘above the sun’; in other words, to look at this from a theological perspective. I immediately realise that there are those who will read this and immediately scoff and dust off their ‘sky fairy, desert shepherds, mumbo jumbo’ tweets.

All I can say is that this is not for you. I am not about to enter into yet another pointless presentation of the evidence for God to those who have a fundamental faith that no such evidence can exist. But this is for those who believe in God and wonder what, if anything, He is saying.

The danger is, of course, that God ends up saying what we want Him to say. So Christian environmentalists tell us that the bushfires are God’s message telling us that our Gospel is to save the world through climate action. Those who are anticipating the rapture/apolcalypse/millennium soon regard this as a sign of the end times. Others see it as God’s judgement upon Australia for approving same-sex marriage and abortion. There are still others who see it as a judgement upon Australia for the historical treatment of the Aboriginal people.

We hear what we want to hear. But what does the Bible say? Let’s think of it in terms of past, future and present.

Genesis 1 tells us God created the heavens and the earth and all of it was good. But there was the Fall and sin, death, disease, dysfunction infected the whole creation. The Bible tells us of flood, fire, earthquake, famine and numerous ‘natural’ disasters. They come at different times, in different ways and to different levels of intensity. But there has never been a time, since the Fall, and there never will be (until the renewal of all things), when a pristine, pure earth provides perfect conditions for everyone.

A New Heavens and a New Earth

2 Peter 3 tells us that “the present heavens and earth are reserved for fire, being kept for the day of judgment and destruction of the ungodly”.

Peter also tells us that “the day of the Lord will come like a thief. The heavens will disappear with a roar; the elements will be destroyed by fire, and the earth and everything done in it will be laid bare.”

But he then goes on to say: “But in keeping with his promise we are looking forward to a new heaven and a new earth, where righteousness dwells.”

The renewal and restoration of the earth is a promise of Scripture. The idea that everything physical will be destroyed and we will all go to some kind of ethereal non-material heaven where we sit on clouds and play harps forever is neither attractive nor biblical. A renewed earth is.

Ironically the current bushfires in Australia give us a little illustration of how that might be. Bushfires have been around in Australia before human habitation. They serve as a means of renewing the earth, helping vegetation and restoring the bush. The Aboriginal peoples understood this and often used fire as a means of control and renewal. Fire can be destructive but it is also a means of renewal. It seems as though Peter knew what he was talking about!

How shall we then live?

Genesis 1:28 tells us God blessed them and said to them, “Be fruitful and increase in number; fill the earth and subdue it. Rule over the fish in the sea and the birds in the sky and over every living creature that moves on the ground.”

Although the earth is cursed because of human sinfulness – the Bible, after all, says that human activity does impact the climate – the original creation mandate does still apply. It’s not a mandate to exploit and destroy but a mandate to manage and steward – for the good of all God’s creation.

A few years ago I was preaching in a church in the southern US and I mentioned that God would “destroy those who destroy the earth” (Revelation 11:18). I was approached by a brother afterwards who asked, “Are you a tree hugging communist?”

I admitted to the communist part but told him that my tree hugging days were over!

He informed me that: “We don’t need to bother about the earth – it’s all going to burn anyway.”

I responded: “That’s fine….if you believe that, I’m going to come round and set fire to your house…because it’s all gonna burn anyway!” I think he got the point.

To me, it is blatantly obvious that as human beings we should be doing the best we can to preserve and care for the Lord’s good earth. Amid all the arguments about the exact impact of human activity on climate change we surely can all agree that cleaner air, water and earth are a good thing? Sharing and using the world’s resources as faithful stewards rather than being selfish, greedy exploiters is the biblical position.

But that means we must do so humbly without hubris and hypocrisy. As I write, Extinction Rebellion are marching in several Western cities (note not Chinese cities!) shouting “stop the fires” – as if anyone had the ability to do so. We can limit the effects but the idea that human beings can control the variable natural elements is hubristic nonsense.

The hypocrisy comes from those who demand that others pay the inevitable price for cutting down on carbon emissions while they themselves continue to enjoy their lavish lifestyles. There is a biblical bias in favour of the poor.  While Prince Charles says we need to deal with climate change before we deal with poverty (and yes, I know that climate change will affect many of the poor more), the Biblical position is that we are to care for the earth and the poor.

It is surely immoral to take money from the poor and tax them for solar and wind energy, in order to provide subsidies for the rich suppliers of that energy. It is wrong to effectively ban the poor from travelling because of increased travel taxes, leaving the skies free for private jets and the roads for those who can afford the excessive fuel taxes. Not all of us have millionaire friends who can loan us their yachts so that we can boast of our carbon free journey! I look forward to politicians arguing for ‘progressive’ fuel taxes that impact the wealthier more than the poor!

Those who are proud and think they are in control tend not to pray. They don’t see the need to. Those of us who recognize that we are helpless in the face of the elements realize that prayer is the most (but not only) effective thing we can do.

“Ask the LORD for rain in the springtime; it is the LORD who sends the thunderstorms. He gives showers of rain to all people, and plants of the field to everyone.” (Zechariah 10:1)

We must also avoid the apolcalyptic, panic inducing hysteria that seems to be gripping much of the Western world. I believe the promise of Scripture.

“As long as the earth endures, seedtime and harvest, cold and heat, summer and winter, day and night will never cease.” (Genesis 8:22)

I don’t believe we are going to be wiped out by an asteroid, or reach the point of no return in terms of climate change. I believe that the Lord has given us minds, technologies and abilities to cope and manage with this broken planet until such time as the renewal of all things.

People mock the idea of prayer but perhaps what God is saying to us is a clarion call not only to care for the creation but to cry out to the Creator.

Jesus mentioned 18 people who died in a tragedy when a tower in Siloam fell on them. “Do you think they were more guilty than all the others living in Jerusalem? I tell you, no! But unless you repent, you too will all perish.” (Luke 18:4-5)

Maybe God is telling us to wake up?

I know that there are people who mock and ask ‘where is your God?’ on the basis of the fires still continuing. But what if God is restraining the fires? This extraordinary story of David Jeffrey and the Christians who prayed on the beach at Mallacoota, is one example we know of.

If it wasn’t for prayer and God intervening then I believe that Australia would be like one of those ridiculous maps being circulated which show half of the country on fire! Maybe, just as with evil and sin, there is much more going on than we realize or see? Our God is a God who restrains – and who rescues us from the fires.

The greatest human problem is not the bushfires nor climate change. The heart of the problem is the human heart.

“I used to think the top environmental problems were biodiversity loss, ecosystem collapse and climate change. I thought that with 30 years of science we could address those problems. But I was wrong. The top environmental problems are selfishness, greed and apathy…and to deal with those we need a spiritual transformation- and we scientists don’t know how to do that.”

Is God not calling us to repent and be renewed – before the renewal of the earth?

Be Honest – The Place of Truth in a Post Truth Society.