In Scotland we have an expression ‘I kent his faither’ . What does it mean? Imagine two people having a conversation after Andy Murray won Wimbledon – ‘Did you see that Andy Murray – the boy done well”…”Aye – but I kent his faither’.   Meaning that there is something negative, mediocre or dodgy about the family.

Another slightly more rustic expression is – ‘he’s a bit up himself’!

In Sweden they have a concept called Jantelagen which is a Nordic code that “promotes the idea of never thinking you are better than anyone else and calling out those who break this norm”. Of course other countries don’t go along with this – the ones where it is considered perfectly acceptable to state how great you are and how much money you have. https://www.bbc.com/worklife/article/20191008-jantelagen-why-swedes-wont-talk-about-wealth

I think the Swedish concept is the more biblical – fitting in with Paul’s command in Romans 12:3 “For by the grace given me I say to every one of you: Do not think of yourself more highly than you ought, but rather think of yourself with sober judgment, in accordance with the faith God has distributed to each of you.”

Here in Australia we have something called Tall Poppy Syndrome. It’s kind of self- explanatory. And although at times it can veer towards the humility of the Swedish concept, more often than not, it is as gossipy and vicious.   I have been reflecting on this as I observe the way that politicians here are treated. It seems as though as soon as someone makes it to the top politically, they are shot down in flames.   It doesn’t matter the party. Perhaps if you survive you will end up being praised on your death bed – but the viciousness of the press has only been intensified by social media. There are an awful lot of angry Australians – I guess that’s the same as in the rest of the Western world. Eminem is not the only angry young man. 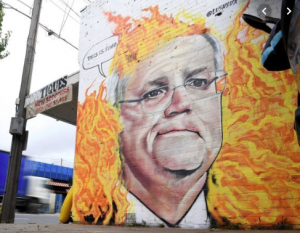 We have seen this in the past weeks especially with the Prime Minister Scott Morrison.   I have been shocked at the vitriol and abuse he has endured. It’s fair enough to criticize and question his policies – but the level of abuse – most of which I wouldn’t repeat here is astonishing. I have seen posters saying his children are going to die, that he is responsible for mass murder and calling him every expletive under the sun –some of these carried by little more than children.   There were a couple of days when the Sydney Morning Herald letter’s page was full of letters that were so vicious I was surprised they were printed.   Talk about stirring up the mob – and creating visceral hatred. I actually thought this week that some unbalanced person might be tipped over the edge by this demonization and that serious violence could easily follow. The tongue is a restless evil and a deadly poison.

Another reason for the anger is a basic immaturity. Life here for many people is good most of the time. It’s a sunshine, sport and success culture….that creates a sense of complacency and at easeness.   But when that is taken away – or threatened –there can be great anger. A sense of entitlement to the Good Life can lead to a sense of anger when that entitlement is not honoured. Someone must be to blame. We have to get angry at someone. Why not the person who the media offer up as the sacrifice to atone the climate gods?

I wonder also if this is sometimes translated into the church? We are far more often a product of our culture than we realize. In the Scottish church we hate success – ‘who do they think they are – wannabe American church mega church senior pastors?’.   We can always rely on our brothers (and occasionally sisters) to keep us humble.   I suspect it’s the same in Australia.   Of course there are the mega churches here, as there are elsewhere – and all the abuses as well as benefits that come from that. But I’m thinking more of how far too many of us promote our own ministries, or justify our own failures, by dissing others.

Surely the more Christlike attitude would be to rejoice in the success of others, whilst praying for the Lord to keep them from pride and sin, and longing for even greater things to happen? Instead we argue that ‘it’s a day of small things’ and therefore anyone who is experiencing even medium size blessing must be suspect. If a Scot can’t win Wimbledon without arousing tall poppy syndrome, how can one of our preachers actually be making an impact? It must be the devil – they must be fake – or they must be using unbiblical methods and will eventually be brought down to earth. Sometimes it’s hard to distinguish between zeal for the truth and jealousy!

I’m not writing this because I have come under any particular attack. I’m a new kid in town and will be given leeway with the excuse of my Scottishness working for a wee while. But that will wear off. Anyway I have done and achieved nothing so there is nothing to fear.   I don’t want to be well known – (not least because I could do without the hassle!) – I want to make Christ famous. Australia needs the Acts of the Holy Spirit – not the actions of a few workers whose labours would all be in vain without His working.   I hope however that I will have a desire to build others up and not knock them down – unless they are denying the Lord who brought them.

Anyway please keep praying for us here. This will not get as reported as the bad news, but there has been good news this week.   The weather has been a lot cooler, the winds not so bad…and there has even been some rain. The forecast for the next week is good. Read yesterday’s blogto see a link to an amazing story of answer to prayer.   Keep on praying. I have a feeling that this situation is going to open the door for many to hear the Good News.