Paula White has a new book out. In case you don’t know who she is, she is a televangelist, prosperity preacher and President Trump’s self-styled spiritual adviser; she is also no stranger to controversy.

She has been married three times – the breakdown of her marriage to Randy White, the co-pastor with whom she founded Without Walls International Church shocked the evangelical world. Almost as much as her friendship with Benny Hinn, which he announced was over. In 2014 she married the rock star Jonathan Cain, of Journey fame.

She has been accused of being a heretic, not just for her prosperity Gospel teaching, but apparent denial of the Trinity, and teaching that Jesus did not die on the Cross for the sins of humanity, but rather to rescue us from financial hardship. The Baptist leader Russell Moore stated: “Paula White is a charlatan and recognized as a heretic by every orthodox Christian, of whatever tribe.” She has denied being a heretic but her critics remain unconvinced. 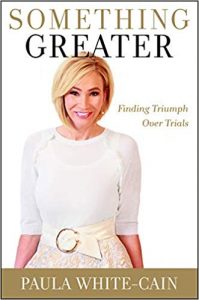 Now, normally I would not read a book by someone with such a CV – it’s not good for my blood pressure, it’s not edifying and life is too short. However, I was intrigued by endorsements from Franklin Graham, Robert Jeffries (First Baptist, Dallas), Greg Laurie (Harvest Christian Fellowship in California) and Ralph Reed of the Faith and Freedom Foundation.

I have a general rule: you should not critique something you have not read. So I spent the dosh and upped her sales by one – so that you don’t have to!

Believe me, Something Greater is a revealing, disturbing and depressing book. It demonstrates why so much of the US evangelical church is in deep trouble.

“The world knows my name, which I share with a thriving ministry that impacts millions worldwide.”

“A soaring, powerful voice erupts from my petite frame on the stage. My blond hair is short, cut in a bob with bangs just above the eyebrows. My purple robe is loose and royal; my words are sharp and understandable. There is a rhythm to the sentences I use, a cadence to my words. There is an unexpected fire in my preaching.”

“This true self is valuable and unchangeable. I have authentic wisdom to share with others”

Now let’s consider what Proverbs 27:2 has to say: “Let another praise you, and not your own mouth.”

What is this obsession in the US church with having ministries named after oneself? God will not give his glory to another.

Through exaggeration, adding to stories and leaving out from them, this whole book is profoundly dishonest.

“I’m nineteen years old, and every time I open my mouth to speak before a sea of people that goes on for miles and miles, something supernatural happens. Millions of men, women, and children listen and look up to God and find the same sort of life I’m given.”

The claims keep coming….50,000 people are born again in one church. Paula knows that she is going to shake nations – not God, not the Spirit, not the Church, not the Bible – but Paula.

The exaggeration and distortions mean that it’s very difficult to discern the truth from error. Do I really believe that she missed out on doing Michael Jackson’s funeral because of a missed phone call? Or that God told her to go quickly and meet Donald Trump because He wanted to speak to him?

The sins of the tongue – hypocrisy, gossip, slander and lying – are more often condemned in the Bible than sexual sins, although the two often go together. A church that is full of liars and hypocrites cannot expect the blessing of the Lord.

“I begin to operate on a budget, one where we could spend 3 percent of our income on clothes, for instance. This formula stays the same whether we make $5,000 or $500,000 a year. This is how we accumulated our wealth.”

At one point it was reported that she and her husband were ‘earning’ $5 million.  If true, that would mean Paula was spending $200,000 per year on clothes! I don’t care how much of a ‘heart for the poor’ you boast about having, such excess is grotesquely sinful.

The obsession with money, wealth, power and influence is a real problem in the Church. We seem to think that Jesus did not mean it when he said we cannot serve both God and Mammon (Matthew 6:24). But that does not stop Paula manipulating people in a recent telethon to get them to send money to help Jim Bakker build a new TV studio. She tells them: “Right now someone is about to send you that $1 million cheque in the name of Jesus, you just have to be obedient, whether it’s $100,000 or $10,000 you send.”

She says that there is a “Department of Treasury in Heaven” which will write up your name. It’s just a straight-out blasphemous lie. The self-justification for greed is breathtaking.

“God must trust some with money and fame because there are people He wants to reach.”

It’s amazing how many feel they are called to be missionaries to the wealthy and therefore in order to reach them, they too must be wealthy. Is this the way of Jesus?

Anyone who can write “I’m dying right now to self” in the midst of a book that is all about herself has a severe problem with self-awareness. As is anyone who claims to be humbled by awards that she has received before going on to express pride in them.

This shallowness is seen in the commitments in marriage, in church and in other relationships. Although claiming to be all about love, helping the poor, being a relational person etc, the lack of emotional, intellectual and spiritual depth is obvious. The obsession with numbers and success is both an expression of, and reason for, this shallowness.

Intellectual shallowness is portrayed as profundity.

“In the Hebrew language, there’s no such word as coincidence.”

Yes, actually, there is. In fact, there are several that are used to convey the idea.

That shallowness breeds endless meaningless soundbites such as:

“We are not supposed to die until we are empty.”

“Find your passion in life and figure out a way to make money.”

There are many other such anti-Christian truisms that I could quote here.

Paula takes great pride in being the spiritual adviser for Donald Trump.

“Fourteen years before he is elected president, I meet Donald Trump. God uses him greatly in my life, just as I will be used in his.”

At times, it seems as though she sees her role as being a kind of John the Baptist to Trump’s Christ.

“After spending time around Donald Trump I find myself inspired by his vision, thought process, keen insight, and overall discipline. He’s a brilliant thinker who tends to walk several steps ahead of the masses. I want to share his wisdom with the world in my own way.”

Donald Trump: the wise brilliant thinker several steps ahead of the masses. Who knew?!

And therein lies the problem. The reason that these pastors have endorsed Paula White’s book is because of her support for, and their access to, President Donald Trump. He is seen as ‘their’ man, if not God’s anointed. It would be foolish to deny that God can use Donald Trump. But it is even more foolish to hold him up as the Church’s prophet or politician.

The narcissism, dishonesty, materialism, shallowness and lack of self awareness is something we might expect of Donald Trump but it is not something that should have any part in the Bride of Christ. If the Church does not repent of its sins, then Ichabod (the glory has departed) can be written over her gravestone now.

Thankfully there are those in the US and throughout the world, who will continue to follow and serve Jesus Christ. He must become greater, we must become less. Despite the title of her book, Paula White offers us something lesser. The real “Something Greater” is a vision of Jesus so glorious that everything else fades in comparison.

The Church has to decide: enough is enough. We will have nothing to do with those who use and demean the name of Christ in order to further their own wealth, fame and power. It’s Christ or nothing.

“You say, ‘I am rich; I have acquired wealth and do not need a thing.’ But you do not realize that you are wretched, pitiful, poor, blind and naked.”

I counsel you to buy from me gold refined in the fire, so you can become rich; and white clothes to wear, so you can cover your shameful nakedness; and salve to put on your eyes, so you can see. Those whom I love I rebuke and discipline. So be earnest and repent. Here I am! I stand at the door and knock. If anyone hears my voice and opens the door, I will come in and eat with that person, and they with me.“