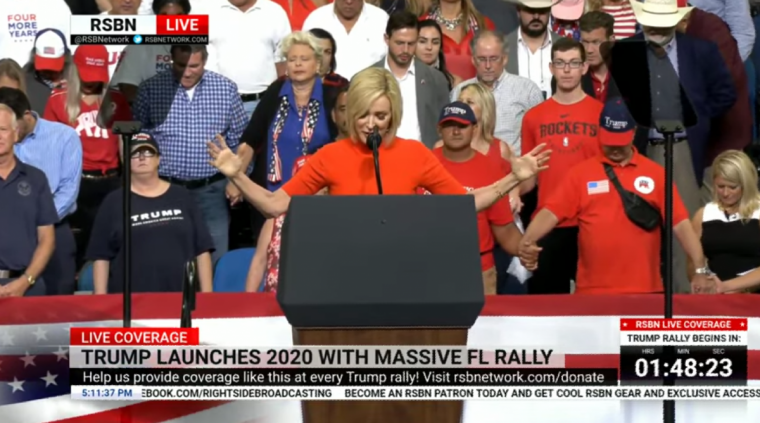 This week President Donald Trump officially started his 2020 re-election campaign in Florida (it seems as though the US political system is a never ending Presidential election – when do they get time to govern?!). His speech to 20,000 fans was widely reported. What was not so reported is the opening prayer from Paula White, a well known US televangelist and one of the President’s ‘spiritual advisors’.

“I pray for the spirit of the Lord to rest upon our president and let your favor cause his horn, his power to be exalted according Psalm 89:17. Lord, your word says in Psalm 2:1-4, why do the nations conspire and the people plot in vain. The kings of the earth rise up and the rulers band together against the Lord and against his anointed saying, let us break their chains and throw off their shackles … Father, you have raised President Trump up for such a time as this.”

The message is clear. Donald Trump is the Lord’s Anointed. Those who are opposed to him are aligning themselves with demonic forces. This is a message I have heard not only from White, but also from various ‘prophetic words’ that I have been sent (from well meaning Christians – not directly from the Lord). I’m not a big fan of being on the same side as the devil, so perhaps I had better get in line?

Having reflected and ‘tested the spirits’, let me put this quite simply. This prayer and the whole alignment of Trump as the Messiah (the Anointed) is a shameful and embarrassing episode in the American church’s history.

We do not confuse politics and religion. There may be many Christians who for various reasons consider Donald Trump to be the best candidate for the next President. I make no judgement upon that.

But that is a political decision upon which a pastor should not make ‘thus says the Lord’ pronouncements. We should not make spiritual declarations either that Trump is the devil, or that opposition to Trump is demonic.

We need to learn a more biblical and nuanced approach to the relationship between Christ and the rulers of this world. I wrote an article a couple of years ago which asked the question – Is Donald Trump the Christian President?

Little has changed since then. The same principles still apply. Donald Trump is the political leader of the US and should be respected and prayed for as such. Witness the wonderful prayer from David Platt when the President turned up unannounced at his church.

What a contrast with White’s OTT ‘bold prayer’. Donald Trump is not the Anointed one. Of course the ‘powers and principalities’ are at work – but they are just as likely to be at work through him as against him. To claim to know the mind of the Lord in this respect, other than what he has revealed to us through his Word, and the workings of the devil, is at best arrogant and at worst a deception.

The Southern Baptist leader, Russell Moore tweeted a couple of years ago: “Paula White is a charlatan and recognized as a heretic by every orthodox Christian, of whatever tribe.”

While White may deny being a heretic and prosperity gospel preacher, I would have to agree with Moore’s assessment and say that sadly such heresy appears to be welcome in the White House.  I say that because the prosperity gospel I believe White preaches fits better with the gold of Trump Towers than it does with the Gospel of Jesus Christ, and I see the demonic far more at work in the manipulation and lies of the prosperity gospel than I do in the political machinations of those who are opposed to President Trump.

Christians need to be careful not to sell our eternal spiritual heritage for the short term political and material gains that we perceive any political leader might give.