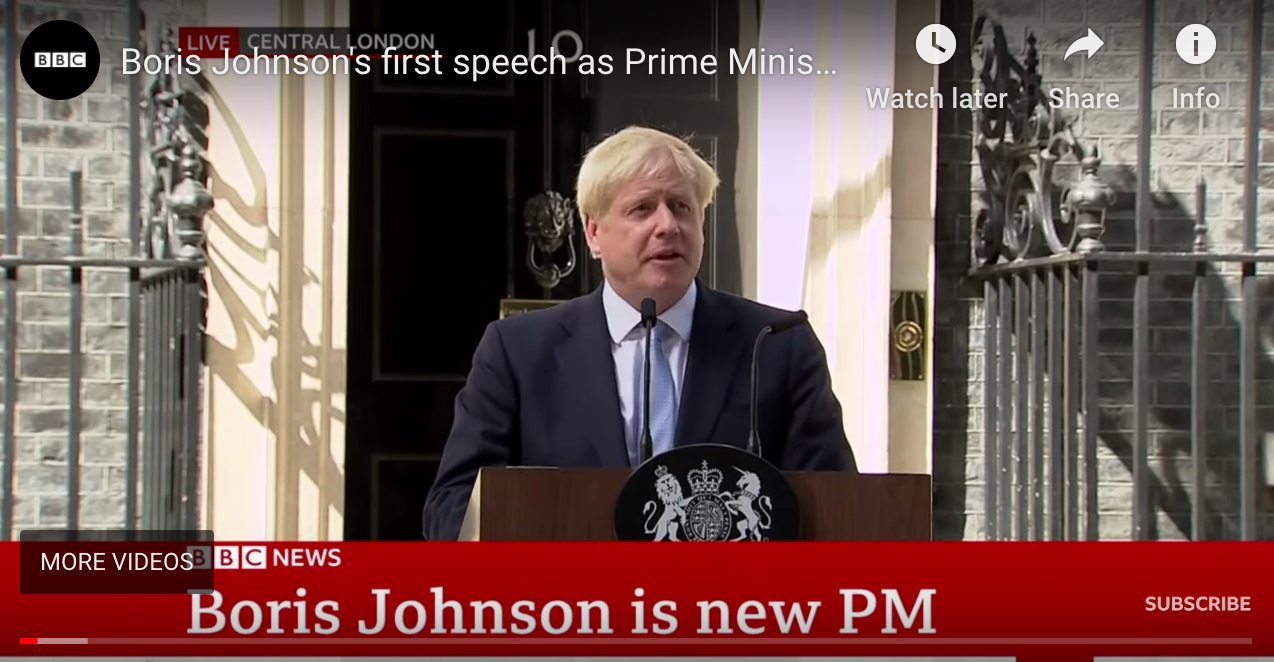 Today is St Boris’s day – at least according to the Russian Orthodox Church. Conspiracy theorists can feel free to get to work.  Watching from a distance it appears as though the UK has gone mad.  On the one hand there are those who regard the appointment of Boris Johnson as Prime Minister with a hysteria which suggests that Satan himself has taken charge; on the other there are those who seem to see him as some kind of Moses type figure – about to lead his people into the promised land.  The Daily Telegraph for example asked if he is The One!

I doubt that many Christians will regard the new Prime Minister as a saint – and some indeed look upon the situation with horror.  What should the Christian response be?    I’m not sure about this whole situation – what I know about Boris is quite depressing but there are some things that I think we can be sure of.   Our response should be”

Not Lies – Boris is not a racist.  Almost unreported today was the announcement that EU nationals are welcome here and that those who are already here can stay – without conditions. Furthermore he has just appointed Sajid Javid – son of Pakistani Muslims to be chancellor; Priti Patel – daughter of Ugandan-Indians to be Home Secretary; and Dominic Raab – son of Czech Jewish refugees, Foreign secretary.  These are not the appointments of a Little Englander.

Not Jubilation – Those who are keen on Brexit have been given hope by the new Prime Minister.  But their rejoicing may be premature.  Boris is very good at the optimistic soundbites  – but whether they will have any substance behind them remains to be seen. Hope (not in the biblical sense of certain, but rather tentative) is the right attitude.

Not Mockery –  I don’t care about the Prime Minister’s looks, accent or his (act?) sometimes buffonish appearance.  We should not indulge in mockery.  It just does not help.  It may make us feel clever and superior.  But it demonstrates the opposite.

Not Moralism –  The new Prime Minister is a social liberal.  He is also one who lives by his socially liberal (im) morality.    I find that depressing and deeply sad.  It does matter to me that he is an adulterer – not least because if his wife (s) can’t trust him – then why should the voters?  Yet this is nothing new.   Immorality amongst political leaders is not a new thing.  If Christians were to say that we can only vote for those who live a good moral life, the choice would be severely restricted.  What I know of Johnson is not good – but yet God may still use him (eg the examples of the removal of politicians such as Penny Mordant, and the appointment of Jacob Rees-Mogg, I can only see as a mercy!)

Not hysteria –  Brendan O’Neil, as so often, gets it spot on when he speaks of Boris Derangement Syndrome.  There is a hysteria around this appointment that borders on madness.  Boris becoming PM is not the end of the world – nor is it – despite the doom and gloom of the Guardianistas, the end of the UK.  It’s just another leader who will (probably) let us down.  Plus ca change, plus c’est la meme chose.  We survived Blair, Brown, Major, Cameron and May.  I doubt Johnson will make much difference!

“The chattering classes have a severe case of Boris Derangement Syndrome. The way they talk about Boris is utterly unhinged, as if he is Hitler with blonde hair. Of course the real reason they hate him is becuase he promises to uphold the vote for Brexit.”

Politics will however become a whole lot more interesting and entertaining.  Although whether that is what we need at this time is another question.

How should Christians then respond to the appointment of the new Prime Minister?

Respect – He is God’s servant sent to do us good.  We are to respect and to submit to those in authority over us.  Not because of their character or their godliness – but because of their office.  At the end of the day Boris has a tremendous responsibility for which he will one day have to give account to God. Ultimately he is God’s servant – not the peoples.  We must respect him as such. Respect does not mean that we agree with him, or that we like him, or that we will do all that he says – especially when he goes against the law of God.   But it does mean that we honour him and seek to help.

Watchfulness – There is a prophetic role that the church has to play.  We are to speak truth to power.  We are to proclaim the law of the Lord to those who make the laws of the land – whether they listen or not.  This is not to say that the Church tells the government what its policies should be, but rather that we proclaim the standards of God’s word, which politicians should take heed of.  When the Church of Scotland (for example) feels free to comment on Brexit (they are, like the C of E bishops, against it, presumably because they think God is) but keep silent on the evil attempt to change the creation of humanity as male and female, there is something deeply wrong.  We are not to be the Liberal (or Labour/Conservative/SNP) at prayer.

Christian individuals as citizens of a democracy have a solemn duty to also be watchful.

Understanding – We should seek to understand.  We should read points of view that are different than ours.   Some times we are tempted to read things that confirm our own bias.  We have an internal algorithm which is set that way.  We must resist it.  Try to understand what is going on.  Try to understand how those who disagree with you think.   For example the appointment of Dominic Cummings is a significant and serious event.  Amongst other things it means the Boris IS serious about Brexit – and makes Brexit far more likely.   There is a scene in the fascinating drama An Uncivil War which I found so moving that I wished it were true!  Cummings puts his ear to the ground but can no longer hear the groans of the poor (Proverbs 21:13) , because the poor are quickly disillusioned with the empty promises of the politicians.

Humility – We can get things wrong.   It’s amazing how many commentators or social media warriors are omniscient.  We write as though we know everything – and all that can be known is known to us.  I, for example, thought that Theresa May might make a good Prime Minister.  Her hubris and lack of self (EU/Westminster) awareness have proven me wrong.  I’m sure it won’t be the last time!

Prayer – This is an absolute.    Prayer is to be made first of all for Boris (and Nicola, and Donald and Vladimor and Xi)…. “I urge, then, first of all, that petitions, prayers intercession and thanksgiving be made for all people— 2 for kings and all those in authority,that we may live peaceful and quiet lives in all godliness and holiness. 3 This is good, and pleases God our Savior, 4 who wants all people to be saved and to come to a knowledge of the truth. 5 For there is one God and one mediator between God and mankind, the man Christ Jesus,” (1 Timothy 2:1-4).  Whatever else you do – tonight and this week  – pray for the new Prime Minister.  Prayer is not endorsement.  It is acknowledgement that these things are out of our hands and that there is a King above all kings.

Footnote:  I have to say that with a few exceptions, the new Cabinet seems much better than the previous one – not least in the appointment of Jacob Rees-Mogg as the new Leader of the House.  Rees-Mogg is one of the few politicians who is prepared to stand up in public for the weakest members of our society.  He is also a brilliant debater and speaker as his performance yesterday shows.  And he will put the Speaker back in his place!