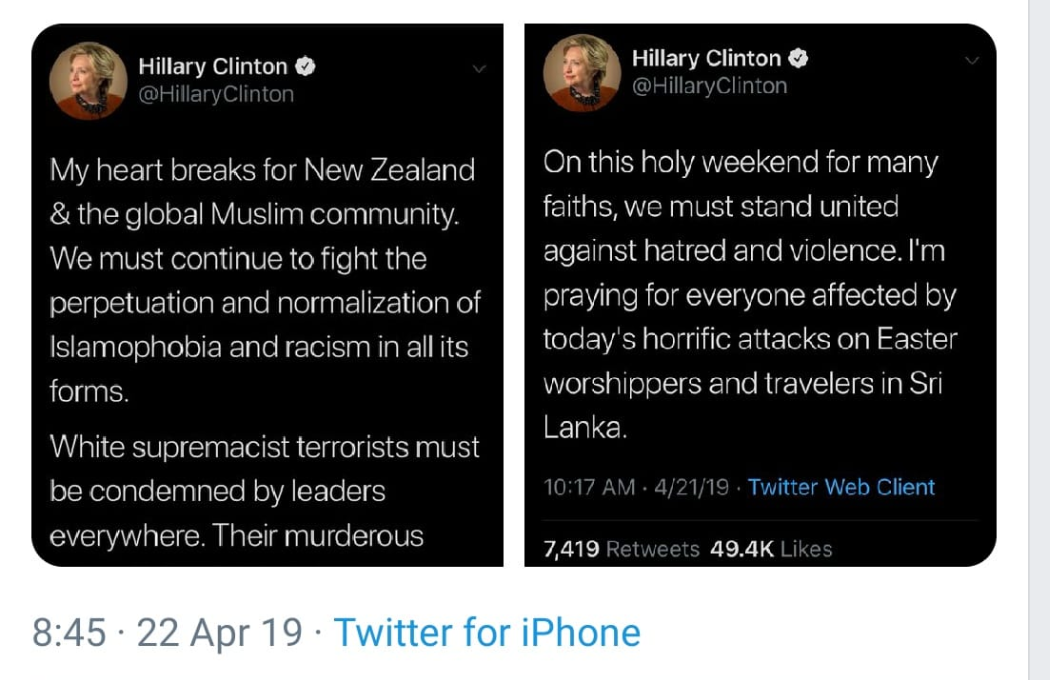 To some extent I blame social media. After every unspeakable terrorist tragedy our political leaders speak. I used to think that you could basically fill out a pro-forma tweet along the lines of “our thoughts and prayers are with the people of X, as they deal with this terrible tragedy…. love triumphs over hate….it must never happen again”. But the tragedies in Christchurch and Colombo have got me thinking the unthinkable. What if we react to different tragedies differently because of the way they are reported? What if the reporting actually makes the situations worse or even increases the likelihood of similar attacks happening again? Words matter.

Before I go on to explain, let me say that for the people in Sri Lanka, our thoughts and prayers are with them. At least from those of us who do pray. Especially those of us who regard our fellow Christians in Sri Lanka as family. The newspapers in the UK will report as a matter of priority the number of people with British connections who were killed. As Christians it’s not nationality that is our primary concern but all human beings made in the image of God and especially our brothers and sisters in Christ. The church is the most multi-ethnic and multi-cultural body in the world. So for example, on Easter Sunday in my church as we stood to announce ‘Christ is Risen’, we also welcomed a Sri Lankan woman worshipping with us. We weep with those who weep.

But as the full horrors of the three attacks on churches, and the three on hotels holding Easter breakfasts, have unfolded I have noticed a rather strange pattern in the reporting and a contrast with the Christchurch shootings – where 50 Muslims were killed in the Mosque attack. Did you notice how I expressed that? I assumed that the Christchurch attack was a horrific attack by someone who chose his targets because they were Muslims.

But our politicians and media have struggled to say that the Sri Lankan attacks were on people who were targeted because they were Christians. Let me evidence this from three contrasting tweets.

Firstly these from Hilary Clinton:

And then this from the Scottish First Minister Nicola Sturgeon who after Christchurch tweeted:

And after the Sri Lankan massacres tweeted this:

Can you spot the difference? Everyone condemns violence, everyone says the killings are bad – let’s take that as a genuine form of what I would call ‘we are all for motherhood and apple pie and against sin’ politics. But note how it is expressed. In Christchurch, it was Muslims who were killed. It was the Muslim community that was attacked in what is now generally described as racism. But in Sir Lanka it was humanity that was attacked.

In Christchurch it was a mosque that was attacked. In Sri Lanka it was ‘places of worship’ and ‘Easter worshippers’. This is a strange and new term to me. Do you worship Easter or is it just the fact that we are worshipping on Easter? According to Hilary Clinton, Easter weekend is a holy weekend for many faiths.

We are told we must take a stand against Islamophobia. But not a word about Christophobia. In Scotland, the First Minister and the Justice Secretary made a show of immediately going to a mosque to ‘express solidarity’ (a good thing to do) and flags were flown at half-mast from government buildings. But they did not visit Catholic cathedrals to express solidarity and the flags continued to fly.

Why is there that clear difference? I don’t think I am expressing a form of Christian paranoia. Nor are we playing some kind of identity politics ‘who is the greatest victim’ game. It’s possible that for some there is a subtle form of real racism (New Zealand is a Western ‘liberal’ country. Sri Lanka?). It is true that 17 Christians killed in Nigeria this weekend don’t even get a footnote in our press.

A second reason is ignorance. When Notre-Dame burned down, BBC News at Ten managed to get through their whole show without a single use of the words ‘Christian, Christianity, Catholic, Worship”. Part of that is due to ignorance – but it is an ignorance that breeds and feeds upon prejudice. The BBC had difficulty in putting the world ‘Catholic’ before ‘Notre Dame’, but shows no such reticence in putting it before ‘Paedophile Priest’. Words matter.

It seems that the main reason for this discrepancy is ideology and the phobia about Islamophobia. The zeitgeist of our governing classes means that they are terrified of being accused of being Islamophobic and at the same time of supporting ‘privileged’ Christianity.

So politicians and media alike (with rare and sometimes horrendous exceptions) struggle to say words like ‘Islam’ and ‘terrorism’ in the same sentence, or indeed ‘Christian’ and ‘victim’. I listened to one national news bulletin that started in the morning by describing the perpetrators as being unknown, then named them as ‘a local group called National Thowheeth Jama’ath’; then they progressed on to “local militants with international connections”. If you are familiar with the code you know what they are saying – without using the actual words.

I can understand the Sri Lankan government wanting to ease ethnic tensions and trying to prevent revenge attacks – although the attacks on Muslims in Sri Lanka (who are around 10% of the population) have come from more militant Buddhists, rather than Christians. But I’m not sure that putting a block on Whatsapp and Facebook will do anything other than increase the rumours and fear.

Likewise I can understand why the powers that be rightly want to avoid stigmatising and blaming all Muslims. After all I did not look out yesterday at the Islamic festival taking place in my neighbour’s garden and think I should be calling the anti-terrorist squad! Our Muslim neighbours are good neighbours. But to gloss over the connection between Islam and Islamist terrorism does not just ignore the elephant in the room, but also runs the danger of making things worse. If news and reporting is suppressed in the interests of ideology and political power then that opens the door for real extremists and conspiracy theorists.

In the 24/7 world of modern media and the instant opinion of social media, the danger to immediately see everything through the eyes of our own ideological algorithms is greatly increased. Within hours of Christchurch, op-eds were being written about the dangers of the Far Right (a demonization which can be extended so far as to become almost meaningless, thus, ironically, helping the Far Right) – although none seemed to discuss that the killer also saw himself as an extreme environmentalist and video games player!

In the light of the Sri Lankan massacres, there were no opinion columns about the dangers of Islamic ideology. In fact there was almost the opposite. The Washington Post had this extraordinarily myopic headline the day after – Sri Lankan Bombings Stoke Far Right Anger in The West as if the primary concern after an Islamist attack that killed over 300 people, should be the Far Right!

How should Christians respond to all this? As people of the Word we know how important words are. We know that the tongue (or keyboard) can be a deadly poison. We must never seek to stir up hatred of individuals or groups. And we must always seek to know the truth. A degree of humility combined with an awareness that we are not omniscient should help restrain our speech, which we should always seek to make salt and light.

When the media and politicians are unbalanced and discriminatory we should resist the temptation to return fire for fire by being the same. Rather we should speak the truth in love, knowing that ultimately neither we nor the judges of this world are the ultimate Judge. There will come a day of Judgement.

Meanwhile whilst we have breath we will continue to fight for justice and proclaim the only One whose love can really overcome hate. We are not ashamed to name the name of Jesus, defend his Word, or preach his Cross. Much of the secular media and many of the politicians will not grasp that because they live in a fantasy world where their words are all that matters. As Christians, we have to live in the real world created and sustained by the only one whose words will last forever. Words matter because The Word matters.

Why Muslims are Welcome in Christian Scotland