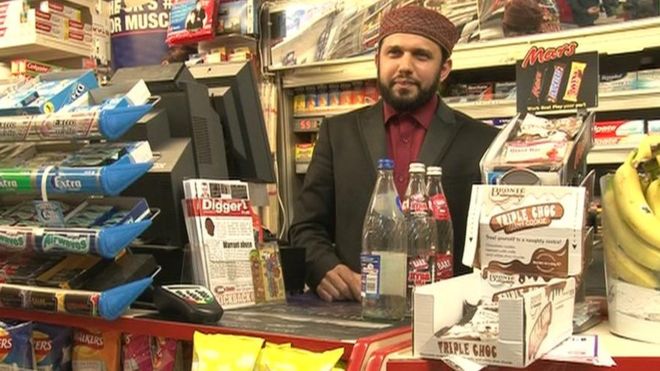 It was an interesting tweet. And it probably cost Asad Shah his life.  The Glasgow shopkeeper was murdered last Thursday outside his shop in what police have described as a ‘religiously motivated’ killing, apparently by a fellow muslim.   This shocking event has traumatised many within the community and within the country. Mr Shah was originally from Pakistan, but had made Scotland his home and has shown a great enthusiasm for his adopted ‘beloved Christian nation’. The greatest tragedy in this is for Mr Shah’s widow and their family. We pray for them and ask that God would grant them his peace. The Lord abhors violence and is near to the widow and fatherless

There are however wider lessons for all of us in the wider community in Scotland to learn. Lets consider some of these.

The Sect – Mr Shah belonged to the Ahmadiyya movement. The Ahmadis number about 10 million throughout the world and are considered as a heretical sect by most Muslim groups. They believe that its 19th century founder Mirza Gulam Ahmad was a prophet and Messiah. They have been banned in Pakistan as non-Muslim. Many moved to Britain believing us to be a safe haven of religious tolerance – which they also practice.   It must be very disturbing for them that this perceived ‘safe haven’ is no longer so safe. That the sectarian wars they fled from in Pakistan have followed them to the UK.

The Sunnis – And the reason why it is no longer safe is disturbing. It’s not because of a ‘Christian’ backlash against Islam, or anti-religious secularists but rather it comes from within Islam itself.   That itself is profoundly disturbing. But there was more disturbing news coming out of Glasgow’s Islamic community. Imam Maulana Habib Ur Rehman of Glasgow Central Mosque has expressed his support for Mumtaz Qadri, the former bodyguard of Salman Taseer, the governor of Punjab province. Qadri was executed because he killed the governor by shooting him 28 times as a punishment for his support of a poor Christian woman who had fallen victim to Pakistan’s extreme blasphemy laws. The Imam said that he was complaining about the death penalty – but of course that was not what he was doing. He messaged –  “I cannot hide my pain today. A true Muslim was punished for doing which the collective will of the nation failed to carry out.” In other words he regards Qadri as a hero who took the law into his own hands and executed a man the law did not see as fit for execution – a man who did not blaspheme but just simply supported a woman accused of blasphemy.  It is to be hoped that the Imam will be as quick to condemn the bombing of Christians in Lahore yesterday, as he has been to lament the death of a convicted assassin. The trouble here is that the Imam is not a side figure – he is the leader of the largest mosque in Scotland. And this is not from an extremist Islamist sect but from mainstream Sunni Islam and the Barveli group within that.   The Barvelis control about 40% of the Mosques in the UK and are not considered extremist.  http://www.bbc.co.uk/news/uk-scotland-glasgow-west-35893123

The Secularists – Our militant secularists don’t know how to handle this either.   The blood was hardly dry on the streets of Glasgow before they were using this tragedy as yet another opportunity to blame all religion.   Garry Otton of Secular Scotland pontificated

““I don’t know how many times religion has to headline the news every day before someone wakes up and smells its toxicity? I’m tired of tip-toeing round it with repeated warnings of respecting ‘faith’ and ‘culture’”

Mr Otton and his fellow secularists are hardly noted for their ‘tip toeing’ round religion’, but their message nonetheless is chilling. The fundamentalism of the more militant atheist secularists is as prejudiced and ignorant as any of the extremist religious fundamentalists.   And their constant attacks and misunderstandings do not really help the position. Mr Shah’s ‘Christian Scotland’ is anathema to them. Strange that he felt so welcome in it. I suspect that he would not have been so welcome in the nirvana of Secular Scotland or the ‘secular’ states of Syria, Turkey, China and North Korea.

The Christians – We mourn and grieve at the loss of any life, but especially when it is someone killed for expressing their faith that human beings should live together in harmony. We are not like some atheistic secularists, or the warped fascist anti-Christianity of people like the EDL and BNP, who believe that the problem is the religion of Islam and have some sick and confused notion of a white ‘Christian’ Britain. This is blasphemy from people who do not understand what Christianity is and who Jesus Christ is.  We don’t want to build a wall to keep Muslims out of Scotland – indeed we want to welcome them. And Mr Shah’s message indicates why – We were his ‘beloved Christian nation’. A nation that practiced the Christian values and virtues of tolerance, equality and welcoming the strangers.

Christian Scotland does not want to exclude Muslims; we want to welcome them in the name of Jesus. There are of course caveats.   Not least that, as Mr Shah did, they recognise that this is a Christian nation and not an Islamic one. We are secular, in that there is a separation of Church and State, so that no religion runs the State.   But our secular society is one that is based upon Christian values. One of these is that people of different views and opinions are genuinely tolerated.  Most importantly there is freedom of religion – freedom to practice, change, preach and live your own religion (or indeed non-religion). So those who support separate ‘Sharia’ laws, or support terrorism, or advocate the killing of other human beings because of their religion, or punishment for apostasy, are not welcome.   We welcome the poor, the refugee and those seeking a better life, whatever their religion or background. But we would commit suicide as a society if we welcomed those who in the name of freedom use that freedom in order to destroy it.

In Christian Scotland we do not believe it is right to kill, punish, abuse or exclude those who have different religious/political/philosophical beliefs.  I do not want Britain to turn into an Islamic state, but neither do I want an apartheid system to be developed in Britain. It will be, if it has not already become, a disaster to have ‘separate’ development in different areas of the UK (and indeed Europe), where multi-culturalism means that separate Islamic states within states are developed (or Islamic ghettos).

May God grant that abiding by the principles of His Word, those of us who are Christians within Scotland would take every opportunity to welcome Muslims, to offer support and help in the name of Christ, and to seek to bring them the good news of Jesus Christ.   I am thankful for the diversity and opportunities (cultural and spiritual) that the movement of Islamic peoples to Scotland has brought. May we use those opportunities wisely.

The latest Solas magazine carries some articles on this in our latest edition. Mine can be found here – http://www.solasmagazine.com/the-crescent-the-cross-and-the-collapse-of-european-civilisation.html