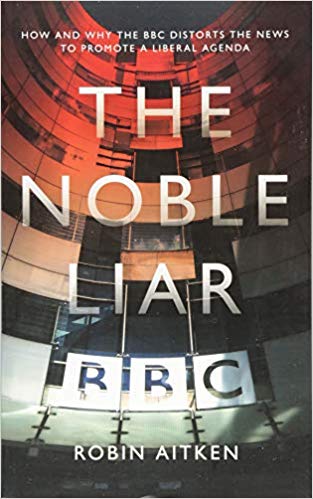 The Noble Liar  by Robin Aitken is my book of the year, so far, and I doubt whether any book will overtake it.  It is a stunning insight from a former BBC journalist and executive – who has 25 years experience of the organisation.  If you want to understand what is going on in our culture, The Noble Liar, is essential reading.

The book is subtitled – “How and Why the BBC distorts the news to promote a liberal agenda” .

I am going to take some time to look at this book in a mini-series of articles.  Here are some of the things I learned from the introduction and chapters one and three.  At the end of each of these review articles I will add a story about my own experience of the BBC.  I should add at this point that I love the BBC — the vast majority of my podcasts are from the BBC.  I listen to it everyday and sometimes it produces outstanding media.  However in one sense that makes it all the sadder that it has become such an instrument for evil as well as good.

In his introduction, Aitken talks about how we might explain to an alien how our culture works.  He also shows why it is important that we understand where our laws come from, and what the influence of mass media has upon us.   He finishes with a warning – that I have become more and more concerned about over the past few years.  Our elites are creating a society which will result in a backlash that will do a great deal of harm.

From where does this moral authority derive? Our alien quite understandably wants to know. Where to start?   Perhaps with Christianity and a national church– the Church of England – and some elementary theology. At this point our alien would have to be introduced to the notion of an omniscient creator who we call God; an entity beyond human understanding who brought our planet, and indeed the whole universe including our alien, into being through an act of inscrutable will at the beginning of the dimension we call time. One can foresee some potential problems here, but let us battle on regardless(we aren’t inviting a debating contest with our stranger, merely telling it how it is according to orthodox Christian teaching): God has handed down to us fundamental truths which, should we listen to our consciences, will guide our actions.(Page 5).

”It is in the law itself that true authority resides, and the fact that our laws derive from a democratic process invests them with a kind of moral authority.”(Page 6).

”Our alien would discover that in the view of many people, the rules which govern our life’s make no sense any longer; that there is a deep disconnect between the views of the ordinary citizen, based on their own common sense, and the prevailing orthodoxies which are promoted in the media and which often end up being enshrined in legislation. Many people feel something has gone wrong,”(Page 9)

“Why is it that so many people find no echo of their own opinions in the big media outlets that serve them?”(Page 10).

“The mass media is the water we swim in and it takes an effort of concentration to see it as it really is….without an understanding of its guiding philosophy we are in danger of being led blindfold into a way of thinking we have not freely chosen, but have merely absorbed.”(Page 10). 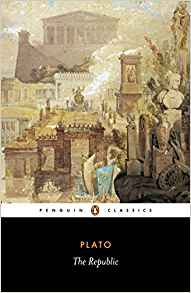 “the title of this book draws on a concept originated in Plato’s Republic; a ‘noble lie’ is a myth or an untruth, knowingly propagated by an elite, in order to promote and maintain social harmony or advance an agenda….. But what truth is the BBC telling? It is the contention of this book that the BBC, along with its media and establishment allies, has become the vehicle for the propagation of a series of noble lies in pursuit of a political agenda.” (Page 13)

“the great danger is that sooner or later people will realize that they have been duped, and this will be a moment of great peril for the established order– with unpredictable consequences. This is the prospect facing Britain. What is urgently needed, this book will argue, is a new and bracing honesty which allows the nation to faces problems in full possession of some uncomfortable facts.”(Page 13).

In this chapter Aitken explains why the BBC is so important and why it is not neutral in its coverage.   He basically argues that the much maligned influence of the so called ‘right wing’ press is nothing compared with the influence of the BBC.  Consider the following:

“The newspapers share of influence has dwindled while that of the broadcasters, and now the online newsites, has grown ever stronger.”(Page 16).

“The left dominance of the airwaves has had profound consequences.”(Page 18)

” 92% of UK adults use a BBC service at least once a week and 80% of UK adults consume BBC News each week; BBC online is browsed by 30 million unique UK users weekly and 51.5% of UK adults are regular users”(Page 21).

57% of people say that they put trust in the BBC compared with other main news providers. The BBC has a weekly worldwide audience of 372 million people. The BBC is the U.K.’s most important cultural export by a very large margin.

“The BBC gets a pass because most people take it for granted that it is a benign influence.”(Page 23). 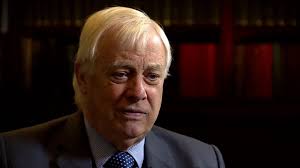 Lord Patten was the chairman of the BBC trust. He launched in 2016 a fierce defence of the BBC. Patten is a key member of the establishment. Even when the voters of Bath dumped him in the 1992 general election he went on to fill a series of establishment rolls. Firstly he was the last Gov of Hong Kong. In 1998 Tony Blair asked him to oversee the independent commission on policing for Northern Ireland. He was then appointed one of the U.K.’s two European Commissioners. In 2003 he was elected Chancellor of Oxford University and then in 2005 he became Lord Patten of Barnes before in 2011 becoming chairman of the BBC.

After the financial crisis of 2008 the director-general Mark Thompson, was paid £816,000 annual salary. 50 BBC executives enjoyed salaries in excess of the prime ministers– then £190,000.

“the BBC is a profoundly political organization, and denying this obvious fact is an insult to our intelligence.” (Page 29)

Politics is now largely a battle between social liberals and social conservatives not the traditional left and right.

” in BBC world we are all liberals now. At the heart of the story, is a nexus of media interests which is militantly liberal in outlook, and which has systematically destroyed the foundational beliefs and practices which informed the lives of previous generations. This process started in the post-war years, gathered strength in the 1960s and, since then, has enjoyed virtually uninterrupted success in the furtherance of its goals (the EU referendum is the exception and at the time of writing, it is not clear whether the wishes of the voters will actually result in Britain leaving the EU, such is the ferocity of the fight back against Brexit ). There have been many players in this long game– crusading lawyers activist judges, organise pressure groups– but the most important by far has been the BBC itself.”(Page 40).

There is no national broadcaster which champions a conservative social agenda.. “So completely has the social conservative view been eclipsed in media-land that I suspect many programme makers do not even understand that there might be a valid view different from their own” (Page 41). 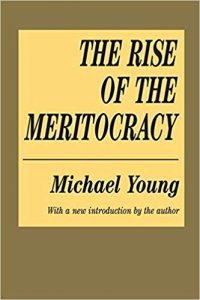 This chapter looks at the fundamental philosophy underlying the views of the people who run and work the BBC. It is a superior one based upon the idea of meritocracy. The chapter looks at Michael Young’s The Rise of the Meritocracy – a 60-year-old book which, although it served as a warning, is now being used as something positive.

“The hallmark of the Economist is its unshakable confidence in its own judgement (An attribute that has survived, remarkably intact, events like the 2008 global economic crisis which, rather embarrassingly for a magazine that is, after all, devoted to economics, it actually failed to foresee). (Page 72)

“So assured have the elite become that there is almost no block on the rewards they abrogate to themselves.”(Page 77).

“There is something odd about this reaction. There is a general presumption that all government policy should be evidence-based, and yet when evidence is presented which displeases the liberal-left, what ensues can only be described as a tantrum.”(Page 80).

We now have an hereditary meritocracy.

In an important insight Aitken discusses the fact that those who consider themselves more educated and less likely to change their minds – whatever the facts!  There is a snobbery and self-righteousness

“I’ve learned over the years that rational discussion accomplishes almost nothing in politics, particularly with people better educated than average. Most educated people are not set up to listen or change their minds about politics.” Dominic Cummings – (Page 85).

“Some evidence shows that people with more education are more likely to cling to their beliefs, education is certainly not a panacea” (Professor Jennifer Hochschild – The University of Harvard) (Page 86) 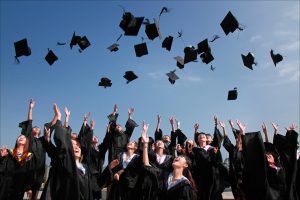 An online survey of academics carried out by The Times Educational Supplement before the 2015 general election found a mere 11% saying they would be voting Conservative, 46% said they would vote Labour, 22% green and 9% Liberal Democrat. This contrasts with 1965 when 35% said they would support the Tories.  Is it any wonder that so many young people vote like their tutors – especially when those tutors use their position to politically indoctrinate.

“The BBC is Michael Young’s ‘word made flesh’; it is the meritocracy incarnate. It is an organization whose staff are, overwhelmingly, drawn from a particular strategy of society –the meritocratic elite– and that strata is becoming evermore ossified in terms of social mobility… This wouldn’t matter so much for the BBC were it not for the fact that, along with membership of this class, goes a set of assumptions and values that turns out identikit opinions: that the better educated are less open-minded in political terms, is an important and only partly explained phenomena” (Page 91)

You Can’t Say That!

A few years ago I was asked to speak on BBC Radio Scotland’s “Thought for the Day”  . I met with the producer who did not like the idea of my just walking into the Dundee studio and speaking for 2 minutes.  “No, we must have a trial run”.   “Send me a couple of scripts”.  Clearly, my thoughts were to be pre-approved by Auntie.   I duly sent in a couple of scripts.  The following conversation ensued:

“Can you remove the phrase “Britain’s Christian traditions”

“Because some people may find that offensive”

“I can’t speak to myself without someone finding it offensive.  You want me to speak to 250,000 without offending anyone?  No wonder thought for the day is so bland! What if I change it to ‘As some people would argue, Britain’s Christian traditions”

“No – that would not be acceptable”

I was banned from speaking on Thought for the Day.  Not because the BBC were concerned about offending people (listen to the blasphemy and mockery on many of their comedy programmes) – but because my views did not fit theirs.   They did not want people like themselves, the cultural liberal elite to be offended.  That’s why my friend Alaister McIntosh is regularly on.  He would be classed as a Green Quaker Environmentalist Radical.  I have no problem with Alaister being on – his thoughts are always worth listening to – even (or especially) when I disagree with him.  But the last thing he is, in a BBC sense, is ‘radical’.  His views fit very comfortable with the conservative BBC.  The last thing they want is a real radical!

BBC Bias, Faith Behind Bars and How to Get to Heaven in Montana