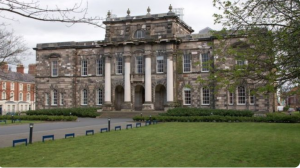 Union Theological College is the largest theological training institute in Northern Ireland.   For many years it has been directly connected with the largest University in Northern Ireland, Queens.  Today it is in the news because it has been announced that following a review, that link is to be completely severed.  Queens University cuts ties with Presbyterian Run College

The Presbyterian Church in Ireland issued a statement:

“After a long and mutually beneficial academic relationship that has lasted for nearly a century, we are naturally disappointed and deeply regret today’s decision by the Senate of Queen’s University, Belfast (QUB)………

After such a long and fruitful relationship this is indeed a sad day. It is our hope and prayer, however, that these long-established institutions, which are literally side-by-side, will continue to prosper, working to further understanding as communities of learning and attracting students from home and overseas to study here.”

So what is going on here?

I have enjoyed speaking at both Queens and Union.   I have a great affection for our Presbyterian brothers and sisters in Northern Ireland.  Unusually for a mainstream denomination they have become more biblical rather than less, as the society becomes secular.  They are now paying the price for that.   The Establishment is once again demonstrating how little it values diversity and inclusion.  Once you begin to challenge their doctrines, even if you are a Christian church, you are excluded.

A previous internal review carried out by Queen’s in 2016, stated that the college’s curriculum was “largely based on Protestant evangelical teaching with little input from other perspectives“, and said there was a “lack of diversity in the teaching provision and staff”. It added: “In a post-conflict Northern Ireland, it is highly unsatisfactory that the teaching of theology is not provided across denominational lines.” That review noted there were no full-time female staff teaching undergraduates in the college. It went on to recommend a radical increase in diversity among the “teaching staff, student body, teaching methods and teaching content as well as in issues of gender, race, sexual orientation and most particularly in faith affiliation.”

Although the BBC report speaks in a coded language it is absolutely clear what is going on.  The PCI is being punished for sticking to the Bible and refusing to go along with the new orthodoxy of the secular progressives.  I’m not sure they will lose out by refusing to adopt as their creed the new progressive theology.  As the divinity faculties in Scotland’s Universities have succumbed to liberalism so the number of theological students training for the ministry has shrunk to a handful.  A theological college or church adopting liberal theology is a sure fire way to suicide.

Let’s just unpick some of the statements.

“largely based on Protestant evangelical teaching with little input from other perspectives…”lack of diversity in the teaching provision and staff”– Why should a college which is based on Protestant evangelical teaching not base its teaching on that perspective?  Just how much ‘diversity in teaching provision and staff” is done in Queens?  I suspect that most subjects in Queens are taught entirely from a liberal/progressive orthodoxy and that anyone who tried otherwise would be out on their ear.   Queens stated that aspects of religion will in future be taught within Queen’s departments like English, history, sociology, politics and philosophy.  Will anyone be allowed to teach those from a Calvinistic perspective?  Or would that be a diversity too far for the all-inclusive Queens?

In a post-conflict Northern Ireland, it is highly unsatisfactory that the teaching of theology is not provided across denominational lines.”  Why?  Queens has Catholic theology as well  – for example the St Mary’s Centre for Catholic Education whose purpose is to promote Catholic education in Ireland?  Are Queens going to remove them if they do not agree to promote Protestant education as well?   It is a simplistic and narrow secular fundamentalism which assumes that if we do not all pay into the secular narrative then somehow we will all end up killing one another.  Why does Queens find it so difficult to accommodate different points of view?

Finally, they talk about how they want ‘diversity’ in gender, race, sexual orientation and most particularly in faith affiliation.”  I’m not quite sure exactly what they are asking for – though I have my suspicions.  As far as I know, Union does not discriminate on any of

those grounds.  Would they refuse any student on any of those criteria?  In terms of practice and what they teach – that is different – because they are there to teach the bible and the teachings of Christ.  That is a counter to racism and gender inequality.   The trouble is that Queens wants to impose a secular liberal ideology and practice upon the church.   The Catholic church teaches that women cannot be priests – in the name of diversity are Queens going to ban them?    It is beyond irony that Queens claims that it is especially the lack of diversity in ‘faith affiliation’ which bothers them.  The Catholic Church and the Presbyterians have the same teachings about social issues such as abortion and SSM.  These teachings are in direct opposition to the values being taught at Queens.  Just who is not allowing for diversity?

But the devious words of Queens will resonate in our culture – sadly even in the church where there is a real lack of discernment about what is going on. Some within the Presbyterian church will argue that the situation is more complex and that Union should just have gone along with what Queens wanted, just to be an ‘influence’ on the inside.  And of course there will be those, especially in the Assembly and bureaucracy who will fear the loss of status and civic influence.  Being on the outside is not nice (but for the Christian church is normal).   Some outside will share those sentiments.  I was astounded to read this tweet from one (non-Presbyterian) evangelical church leader, who called both Union and Queens irresponsible.

“UTC has become hardline conservative. It wasn’t in my day and in my opinion (which is only my opinion!) a bit more diversity (gender/race/age/doctrine) is not a bad thing. How else do you teach people to think well? But they are increasingly narrow on a whole swathe of issues.”

What is meant by hardline conservative?  Who said that diversity was a bad thing?  In fact in the Church of Jesus Christ, it is a normal thing.  But we don’t impose it by quotas.  98% of the population in Northern Ireland is white; 0.35% Chinese, 0.34% Indian.  Should Queens really be blamed if they just reflect the community they are in?   And what does diversity in doctrine mean?  Should unitarians teach Trinitarian theology?  Should those who deny the bible be responsible for teaching pastors to teach the bible?

How else do we teach people to think well?  Didn’t Jesus know what he was doing when he chose the 12 disciples?   Did the fact that they were all Jewish men mean that they could not think well?  The early Christians were accused of being too narrow – Jesus himself did teach us that the road to eternal life was narrow and that there is a broad road that leads to destruction.  Personally, I would suggest that the early church were radical and focused.  Focused on Christ.  Surely that is where we should be?

When asked to bow the knee to Caesar and deny the Lordship of Christ, the early believers were prepared to die rather than obey.  The PCI are not quite on the same level – but they too have been asked to bow the knee to our secular lords and, despite the threat of ‘you will lose influence and people will call you bigots’, they have stuck to their guns and paid the (relatively) small price.

It is far better for Union that they are out of such an intolerant and controlling institution.  I hope faithful colleges like Moore, ETS, Westminster, Reformed, Union (In England), Aix-En-Provence, Kampen and others will work together.  Given the bottom line is that given a choice between obeying Christ or Caesar, the PCI have chosen Christ.  Good for them.  I hope the rest of us would have their courage in challenging the shibboleths of our liberal/regressive culture.   Even if we are asked to pay a far higher price.  Or are we just going to laud the radicals and martyrs of the past, but refuse to emulate them?

Some Observations on The Church in Northern Ireland