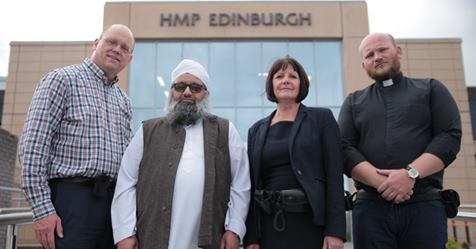 I remember when the BBC used to produce quality documentaries –  I still recall the brilliant How to Get to Heaven in Montana.   Occasionally they still do – but sadly they are far too often of the standard of last night’s ‘Faith Behind Bars’

The programme is only available from the Iplayer for 29 days – but you can see a clip here…..

What was wrong with it?  Whereas How to Get to Heaven in Montana just told the story and let the participants speak for themselves – far too often BBC documentaries are about the story that the producers want to tell, rather than the reality of what is.  I find them increasingly pretentious, shallow and lacking balance.

So it was with last nights.  We had the Masterchef style narrator….the lack of any real questioning and in depth analysis and of course the BBC bias.  There were four chaplains featured – three of them were given considerable time.  The RC and C of S chaplains were well covered and of course the Imam was given plenty room to speak and very favourable coverage (virtue signal alert –  ‘see, no Islamaphobia here’), but Bob Akroyd, the evangelical Free Church minister, got 30 seconds, part of which was a snide remark commenting on even the C of S and the Free Church working together and a bit of banter from Bob about he and the C of S minister not even liking each other – which left out of the context gave a really wrong impression.

I understand that Bob gave hours of his time to this film crew and this is all they used.  Of course they did.  This was the ‘safe, on message’ documentary style of the modern BBC.  Nothing to challenge the shibboleths of modern society and nothing to reveal anything of real depth.  And absolutely nothing of the Gospel to be permitted!

But here is a real treat for you….thanks to the wonders of the internet I found How to Get to Heaven in Montana….its not the greatest quality but you will love it…if you go to the 41st minute you will see where I got the title for Magnificent Obsession

Was Billy Graham a homophobic, Christ denying, antisemitic and bigoted failed evangelist on the wrong side of history?