This is a conversation I had with Alastair McIntosh, a Quaker activist, broadcaster and 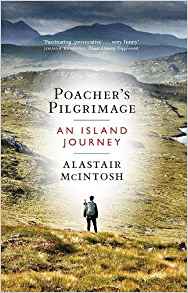 writer.  He is the author of a superb book – Poachers Pilgrimage.  We discussed many things in front of a good audience in St Peters.   It may not sound the most riveting of evenings – over an hour discussing theology, history, the Highlands,church etc – but the most common reaction afterwards from those who were there was – “that was far too short”!  Alastair wanted to talk about Calvinism, predestination, limited atonement, the character of God, forgiveness, Hitler, salvation and other things..

I very much enjoyed talking with Alastair….to my mind this was a respectful and fun conversation and yet also deeply serious. In my view, Alastair comes so close and yet at times so far. I found it all very stimulating and indeed at times moving. See for yourselves.