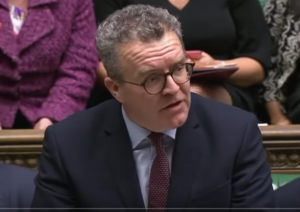 Tom Watson, the normally sensible sounding deputy leader of the Labour party, has come out with a call for YouTube to follow Instagram and Facebook in banning Tommy Robinson, the political activist and former founder of the English Defence League.  Watson thinks that Robinson should be banned or else governments should set up ” a powerful and independent regulator of the unaccountable, irresponsible social media giants.”

Before I go on – let me issue a disclaimer (and its depressing that such is the environment today that I have to do this).  I am not writing in defence of, or in support of Stephen Christopher Yaxley-Lennon (Robinson’s real name) or his ideology.    I am trying to assess for myself if the claims of him being a fascist are true.  Given that it is now normal to call anyone who disagrees with you a far right fascist, you will forgive me for not automatically accepting that he is. Especially on the basis of the word of those who say he is, because ‘everyone’ says he is.  As someone who has been the victim of a ‘hate speech’ witch hunt myself (because I don’t support SSM and I think that biology does have something to do with gender), I am highly sceptical.

Who is Tommy Robinson?

Robinson is a 37 year old working class descendent of Irish immigrants.   All that I knew 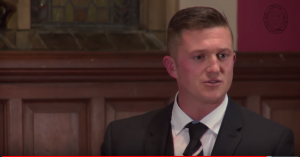 of him was negative (he has clearly said things and done things that are wrong and despicable) and then I listened to this speech he made from the Oxford Union.  I always believe that you should listen to those you oppose.  You may not have the time to watch all of this but I would highly recommend you do so, before it is banned. It is utterly fascinating and compelling.  He comes across as intelligent, passionate, persuasive and incredibly brave. He is certainly anti-Islamic but there is little evidence that he is a racist.  (incidentally I was told that he was typical far right anti-Jewish – but have discovered that he describes himself as a Zionist!  In fact Watson’s Labour party is far more anti-Semitic than Robinson!).

If you listen to this you will hear some of the privileged middle students from Oxford yelling at him and seeking to prevent this working class man from Luton being allowed to speak.  Who will speak for the working class in Luton?  Why – the privileged elites – fo course.   Don’t let the man speak for himself!   If you watch his speech you will surely acknowledge the truth that Robinson and others actually live in these situations (even if you don’t agree with his analysis) – unlike those who pontificate from out with.

I also listened to Robinsons’ latest ‘documentary’ entitled Panodrama.   If true it is an absolute expose of the BBC’s panorama programme.  If this had been made by a left wing group it would be all over the media and newspapers – but as it is – there is complete silence.  Not a word from the politicians, the BBC,  the Guardian, the Independent (or indeed any of the press).  It’s almost as though in their fearless journalism in pursuit of the truth, they are afraid to even be seen as someone defending or agreeing with anything Robinson says.  He’s a fascist – we don’t want to be associated with fascists!  But here is evidence that Panorama deliberately set up people and lie.  From a publicly funded body that is atrocious.

Should Robinson be Banned?

But the main point is not for or against Robinson.   Even if he was as bad as they allege – and I have yet to see the evidence, I still think that he should not be banned.  Why?

1) Because Fascism and other extreme ideologies are a real threat – not just an excuse for virtue signalling or fundraising for the middle class progressives.  Because when you ban an ideology you drive it underground and give credence to its claims that it is being driven underground.   The best way to deal with racists, fascists, communists, anti-semites etc is to argue against them.  Let them speak in public and challenge them in public.  I have spent most of my life doing this and I will continue to do this.

3) Because bans are selective – Let’s take this example of an extremist tweet – the kind for which he was banned from Twitter. 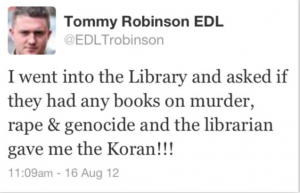 If you are going to ban Robinson for that – then you will have to ban the Scottish Secular Society who have said the same thing about the Bible!

4) Because banning leads to Fascism – If they ban Robinson, they can and will ban anyone who does not agree with them. A society which bans Robinson is a society that ends up banning Germaine Greer and Peter Tatchell….as well as yours truly.    A Fascist society is a corporate society where the State controls everything – including speech.

This is already going on in our culture.

Here is a small example from this weekend.  I received the following message yesterday.

Due to over 100 complaints to the Caladh Hotel in Stornoway the Scottish Family Party Meeting which was scheduled for 7pm – 8.30pmMonday 4th March has sadly been cancelled by the hotel.

The meeting will now be 7pm – 8.30pm in the upstairs of the County Hotel on Francis Street Monday 4th March.

The Scottish Family Party have faced this sort of opposition before with their previous meeting in Aberdeen being cancelled by the hotel that they had booked in due to opposition by secularists and PC/gay rights/transgender activists.

The question is not whether you agree with, or support the Scottish Family Party – but whether you support their right to meet and express their views. If you don’t you are far closer to being a fascist than Tommy Robinson.

If you really want to encourage fascism then just keep calling everyone who disagrees with you a fascist.  At some point they are going to turn round and say – oh well if a fascist is someone who holds my views – then yes I’m probably a fascist.  Your name calling may make you feel good about yourself but you run the enormous risk of encouraging the very thing you profess to be against.

I am not a Muslim but because of freedom of religion I support their right to worship.  There is no complusion in religion (or at least in the Christian religion).  I am not a member of Stonewall or the various LGBT lobby groups – but I support their right to march and put their case.   I think the SSS (Scottish Secular Society) are fundamentalist extremists but I don’t think they should be banned on the internet.  Freedom of speech means I defend the right of those who disagree with me to speak – and don’t seek to have them banned.

Our society is based upon some basic freedoms.  Freedom of religion is the foundation, from that stems freedom under the law, freedom of the press and freedom of speech.  Tom Watsons’ ideology is a form of ‘liberal fascism’ – one which takes away all those basic freedoms.  In Tom’s Britain we can only speak, print or publish what the State ideology permits.   And there is no equality under the law.  The rich and powerful get to determine the law..   The ruling elites will argue that they only ban ‘extremists’, but then they take to themselves the right to define what an extremist is.  They use the law, the big corporate companies and the Twitter mobs to silence all dissent.  In the name of freedom and tolerance, they will not tolerate freedom.

Tom Watson’s ideology is a far greater threat to our society than Tommy Robinson.

(I am not a prophet nor the son of a prophet but let me prophesy that I will be called a fascist for writing this article and will face calls that I should be banned  In future if I am asked to speak on the BBC doubtless some activist group will write in and say ‘he defended Tommy Robinson, therefore in the name of free speech he should not be allowed to speak.  These are the new ‘British’ values!)

After I wrote this I read this article from Brendan O’Neill which sums up much of my concern:

Another footnote:   Since publishing this I have seen a number of posts from people suggesting that FB, YouTube etc are private companies and therefore they can do what they want and censor who they want.   To which I simply respond with these questions: