Book- Our Culture What’s Left Of It, the Mandarins and the Masses – Theodore Dalrymple 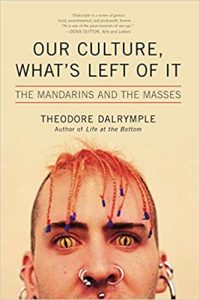 This is a stunning book.  A delight.  “Dalrymple is a writer of genius: lucid, unsentimental, and profoundly honest…..He is one of the great essayists of our age” (Denis Dutton).  I have no idea how I missed this book (which came out in 2005) but I am so glad I found it now.  It is one of the best books in terms of understanding our contemporary society.    Dalrymple is a doctor and writer.  His experience, intelligence and breadth of knowledge make his observations astute, witty and insightful.  I will do a fuller review of the book later.  The fact that he is not a Christian makes his comments even more astounding, because in so many places he comes up with a biblical analysis (if he does not quite get the solution).

“Princess Diana was useful both alive and dead to British liberals, who habitually measure their own moral standing and worth by their degree of theoretical hatred for and opposition to whatever exists”

I don’t watch a lot of TV but there are some shows that I watch (usually on catch up) for either light entertainment or just to keep tabs on the culture.  The Graham Norton show is one such.  He is a superb interviewer, witty, intelligent and personable.  He is also a window to the liberal zeitgeist of our celebrity culture (because it is only celebrities he interviews).    He often starts off with some political jibe (usually about Brexit) and his values reflect all the values of our contemporary culture – something he will never challenge.  At times it is crude and lewd – at other times revealing and fascinating. Mostly I find myself feeling saddened and depressed during and after it – what shallow and sad lives most of our celebrities seem to lead.  Would love to see Norton becoming a Christian….of course it would be the end of his show – but he would make a great apologist!

If you are fed up hearing about Brexit but still want to understand what it is all about – Brexit – a Love Story from the BBC is the best resource.  Mark Mardell is a brilliant narrator and interviewer.  It is entertaining, balanced and informative.  The BBC at its best.

Cohen is my favourite poet – every album contains masterpieces!   Popular Problems is one of my favourite albums ever.  Born in Chains is such a great Gospel presentation!

I was born in chains but I was taken out of Egypt
I was bound to a burden, but the burden it was raised
Lord I can no longer keep this secret
Blessed is the name, the name be praised
I fled to the edge of a mighty sea of sorrow
Pursued by the riders of a cruel and dark regime
But the waters parted and my soul crossed over
Out of Egypt, out of Pharaoh’s dream
Word of words and the measure of all measures
Blessed is the name, the name be blessed
Written on my heart in burning letters
That’s all I know, I cannot read the rest

I have a real problem with the concept of ‘fine dining’.  It seems extravagant, wasteful and somewhat over indulgent.  At times it becomes really pretentious.  But there are other times when it is just beautiful and extraordinary food.  I don’t think its wrong to enjoy the Lord’s creation in that way – did He not after all give us taste buds, creativity and the ability to appreciate beauty?  This week was Mrs R’s birthday so we went to one such fine dining establishment – I believe it won the award as Scotland’s best restaurant.  It’s The Newport in Newport.  Because of a great voucher deal we were able to enjoy a superb tasting menu….all of it was delicious – a delight.  We gave thanks before the meal and we gave thanks afterwards.  The only problem is -don’t be in a hurry….the service was incredibly slow….I got hungry in between courses!    But the Newport is special – and it has a great view across the Tay to Bonnie Dundee.