Before going on to Ch. 12 of The Great Deception –  lets catch The Brexit saga rolls on and this week took another turn.  After Mrs May’s Brexit agreement was roundly defeated by over 200 votes, this week it passed by a surprisingly comfortable margin of 16 votes.  Except of course it didn’t because it was not the same plan.  The amended plan would seek a change to the Northern Ireland backstop.  This is important to the EU and unlikely to be agreed, not because the EU is especially concerned about peace in Northern Ireland, but because it wants to ensure that the UK cannot infiltrate the Single Market through Northern Ireland and most of all because it wants to use Northern Ireland to keep the UK effectively in both the SM and CU – thus controlling much of our trade and industry and preventing us from making trade deals.  It’s a cynical and desperate ploy.  But one that is likely to work.   UK politicians don’t really have the nerve and courage to stand up to such bullying – besides which there are far too many UK politicians who are in Brussels pocket and have bought into the EU fantasy.

The EU will of course refuse re the backstop although knowing that a ‘hard Brexit’ will result in a hard border.  Their absolute is not the border but the Customs Union and the Single Market – and also protecting the political project of the EU by punishing the UK for  Brexit.  The EU is not an open market but a closed one.

The EU position can be summed up in this  – “we are waiting for Britain to come with new proposals but we are not willing to renegotiate” – which begs the question why they want new proposals.     Have you noticed how when Mrs May refuses to move, to Remainers’ she is ‘stubborn and obstinate, leading the nation to suicide”, but when the EU refuses to budge they are ‘brilliant and principled, leading the EU to Nirvana’.

This weeks articles include this fascinating insight into the motives of some Leave voters and this interesting suggestion from our old friend Yanis Varoufakis.  There is also this insightful summary of the view of the EU from the Left.

“Britain is teetering on a knife’s edge: about to crash out of, or back into, the European Union. Either outcome would represent a defeat for democracy in the UK and in the EU.” – Yanis Varoufakis

Here is a great explanation of the EU!

Mrs Thatcher was the longest-serving prime minister in Britain for the 20th century. But the latter half of he period was dogged by questions about Europe and ultimately it was to result in her demise.  This chapter records her conversion (or de-conversion) from being an EUphile to being anti-EU.

Chancellor Nigel Lawson wanted to join the Exchange Rate Mechanism – Because he thought it would be a good thing economically. Geoffrey Howe, on the other hand wanted to join because he knew that the purpose was not economic but political – a mechanism designed to promote greater integration. Thatcher alone amongst the Cabinet was opposed. 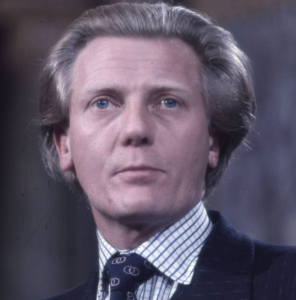 Heseltine, got embroiled in arguments about the Eurofighter and the Westland helicopter project. (It’s interesting how Heseltine is now wheeled out as a moderate pro-European on the BBC and other media). Heseltine became a bitter enemy of Thatcher. His preference for the more expensive European options was to prove very expensive to the British taxpayer. The Eurofighter cost the British taxpayer more than £16 billion, for an aircraft which became obsolete with the end of the Cold War and was still not in service by 2005, two decades later. The Anglo Italian EH101 helicopter ended up becoming the most expensive helicopter in the world, costing a hundred million pounds each – and even then it was inoperable until the US Lockheed Martin company provided technical assistance! When it comes to the European project it appears as though taxpayers money is of little consideration.

Thatcher was changing quickly. She had come a long way from her launch of the yes campaign for the Conservatives 11 years earlier. In addition to noting the determination of the Franco German block to set the community’s agenda, she observed that the commission was now led by a tough, talented European federalist, whose philosophy justified centralism. She also recorded how her own foreign office officials seemed to be moving to compromise with these new European friends. 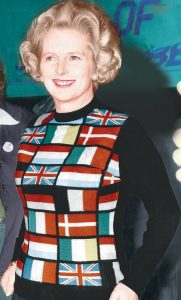 After her successful election campaign in 1987 she decided to take on the European Community. It was to be three years of a war of attrition in a minority of one. At the Brussels council in June 1988, after a bitter battle, Mrs Thatcher thought she had won in significant areas. But there was one area which was to prove significant, where she lost. A huge increase was agreed to regional funds – which gave the commission power to administer regional policy. Previously national governments have devised their own schemes for regional funding then applied for money to the commission. Now it was the commission who directly interacted with regional authorities – then immediately set up offices in Brussels so that they could lobby for funding. This greatly undermined national elected governments and gave far greater power to the bureaucrats both at regional and European level.

The ongoing battles continued with the determination of the rest of Europe to have a single currency and to set up a European central bank..Delors also argued that there should be the beginnings of a European government by 1995. Thatcher could now see clearly the way that things were going. Her response?

“Were British democracy, Parliamentary sovereignty, the common law, our traditional sense of fairness, our ability to run our own affairs our own way to be subordinated to the demands of a remote bureaucracy, resting on very different traditions?”.

Meanwhile in September 1988 Delors addressed the annual congress of the TUC setting out the EU and its social dimension as an answer to Thatcherism.

Thatcher also made a significant speech in September of 1988. The famous Bruges speech on the future of Europe.

“Europe is not the creation of the Treaty of Rome. Nor is the European idea the property of any group or institution. We British are as much heir to the legacy of European culture as any other nation. Our links with the rest of Europe, the continent of Europe, have been the dominant factor in our history. For 300 years we were part of the Roman Empire and our maps still trace the straight lines of the roads the Romans built. Our ancestors – Celts, Saxons and Danes – came from the continent. “

“We have not successfully rolled back the frontiers of the state in Britain only to see them reimposed at the European level, with a European superstate exercising a new dominance from Brussels….willing and active cooperation between independent sovereign states is the best way to build a successful European community… Europe will be stronger precisely because it has France as France, Spain and Spain, Britain is Britain, each with its own customs, traditions and identity. It would be folly to fit them into some sort of identikit European personality.”

There was a furious reaction both in Britain and on the continent to the speech. Howe became determined to bring Thatcher down because she was no longer a true EU believer.

One of the most remarkable things about the current Brexit/EU debate is just how much belief in the EU is treated like a religion and its most dedicated devotees behave like the worst religious fanatics.  (To be fair on the other side there are those who seem to treat Brexit and the UK like some kind of cure all as well).   The EU has moved on from being a market to being a Superstate – and now a quasi-religious ideology.

Howe parted with Thatcher when he realised that she was no longer a true believer – “It was like being married to a clergyman who had suddenly proclaimed his disbelief in God.”   In the political world there are never simple solutions or situations where one side is always bad and the other good.  The EU has good and bad points.  But when you come to believe that the EU is THE answer and anyone who thinks otherwise is a deluded fool, or evil; then you will end up with the kind of extremist positions that so many of our political class seem to take.  We can only hope and pray for more realism (on all sides) in the coming weeks.

The Great Deception – Part 12 – The Creation of a ‘European’ Identity.