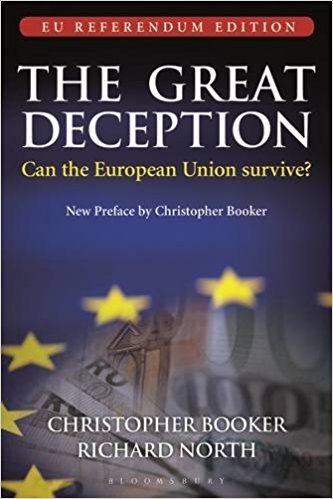 This is one of those books that is culture changing.   Written by Christopher Booker and Richard North, it is a detailed, well-researched and brilliantly argued book about the history of the European Union. It was first published in 2003 but this updated edition was released in 2016.

“A superb history of the EU and of Britain’s relationship with it…every MP, every senior civil servant, every journalist with any claim to understanding the current state of the country, should read it” Peter Hitchens, Mail on Sunday

I would wholeheartedly endorse Hitchens view. I spend far too much time arguing with politicians and others who have bought into the EU’s myth about itself.   My challenge is very simple. Every one of our lawmakers and opinion formers should read this. If they can prove it wrong, so be it. I would probably change my mind. But if it is right in its main thesis then it is a devastating expose of the EU, and should make every rational person, glad that we voted to get it and should add to our determination to get out.

I am reminded of the saying that “those who do not know their history are doomed to repeat it.” We need to learn.

The Great Deception answers such questions as – Why are people so fanatical about the EU? Why have the SNP (at least in its leadership) given up on Scottish Independence? Why are academics so vastly behind the EU? Why are the big corporations, the CBI, most of the trade unions and the Americans so supportive of the EU?

What did Thatcher get wrong? Did Blair and Heath lie? Who are the current players in the EU game? What do they want? Why does it all matter?

It is political, historical, economic, and philosophical. Unquestionably the book of the year – no book of the decade and one that is key to understanding where we are.   Like the Church of England Newspaper I found it to be a ‘real page-turner”.

However there are a lot of pages to turn and I’m not sure that everyone has the time, so I thought over the next few weeks I would summarise the arguments, main lessons and give the most pertinent quotes from the book. I will try and put up on chapter per week.

Lets begin with the introduction and the lessons we learn from that.

“But, alas, the British people have still not really begun to understand how consistently and comprehensively they have been deceived.” P vi

The Great Deception shows the extent of much we have been fooled. Forget the £350 million that even if it was a lie (in reality it was a slight of hand confusing gross and net payment, which is what politicians often do), is almost a white lie, compared to the lie that Heath, Blair and others sold to us.

2.  The EU was always intended to be a ‘supranational’ body which does away with nation states.

Booker and North explain what the purpose of the EU was and is, from the beginning. It was never intended to be a ‘trading area’ or a ‘common market’. I am still astounded at the Tweet I got from an SNP MP who said that the EU did not need to be democratic because it was just a trading arrangement!   Until we understand the nature of the EU, then we cannot have a sensible discussion about it.   For far too long that nature has been hidden from us.

“The form of government it created was unique because it was designed to place the nation states which belonged to it under a ‘supranational ‘power, unaccountable to any electorate, ruling its citizens through the agencies of each countries national authorities.” P.vii

The whole purpose of the EU is to be a ‘supranational’ power.   It is not a collection of individual sovereign states who each retain their sovereignty and work together in a collective capacity. In the infamous words of the SNP slogan “an independent country in an interdependent EU”. The point about the EU is that it is designed to do away with independent countries. And for good reason. Its not just the reminder of the horrific two wars in the 21st Century fought largely between, and because of, European nations; its also as one of the key founders put it –

“The sovereign nations of the past can no longer solve the problems of the present: they cannot ensure their own progress or control their own future. And the community itself is only a stage on the way to the organised world of tomorrow” Jean Monnet p.1

Although much is spoken of ‘subsidiarity’, or the rights of countries to veto – the whole purpose from the beginning has been for the EU to be a collection of nation states, which give up their sovereignty in order to create a super power that transcends and is above each state.   How it does this is brilliant. Not by using its own armed forces, courts, parliament etc. (although these are increasingly going to come into play) but rather by getting the national institutions of the countries within it, to be their de facto instruments.

3.  The EU uses the national institutions of nation states to do its will and take away their Sovereignty

“Europe’s power is easy to miss. Like an “invisible hand” it operates through the shell of traditional political structures. The British House of Commons, British law courts and British civil servants are still here, but they have become agents of the European Union, implementing European law. This is no accident. By creating common standards that are implemented through national institutions Europe can take over countries without necessarily becoming a target for hostility.” Mark Leonard, Centre for European Reform, 2005 – p.1

The big danger of this should be obvious.  It is fundamentally anti-democratic.  When I changed my mind on the EU and decided to vote for Brexit, it was nothing to do with immigration or even the money that we paid, it was simply this question of democracy.  I examined the institutions of the EU and came to see that fundamentally they were not democratic.   (Those who screamed ‘its more democratic than the UK’ are people with little understanding of what democracy actually is).    I could see the ‘how’, but I didn’t know the ‘why’.   The Great Deception provides the answer.  Until there is one European Superstate, an USE (United States of Europe), the EU cannot be democratic because it cannot allow national democracies to overrule its central authority.  By definition the EU has to be an undemocratic.

4. The EU is moving towards being a European Federal State.

Even in the introduction what fascinated me was that the current big players were very involved and active then. The Belgian politician Guy Verhofstadt is now the European Parliament’s chief negotiator for Brexit. He made it unequivocally clear what he is looking for:

“The constitution is the capstone of a European federal state” – Guy Verhofstadt, Belgian Prime Minister, Financial Times, 21 June 2004. P.1
It’s a good job we are leaving!