We return to The Great Deception – but before doing so, let us note where things currently are in the great Brexit debate.  It appears as though the momentum behind a second referendum has stalled – with its advocates arguing amongst themselves – and the government seeming less and less likely to support it.    The EU meanwhile is refusing to budge on the question of the Northern Irish backstop (the one issue that would ensure May’s deal got through the Commons) – when you read this weeks chapter you will see why the EU are using the Irish to control things.   The big push now is for Brexit to be postponed – which means that it will keep being postponed until they eventually think they can get away with keeping us in the EU!

This of course has been the EU’s stance all along.  Look at this quote from their chief negotiator, Barnier. 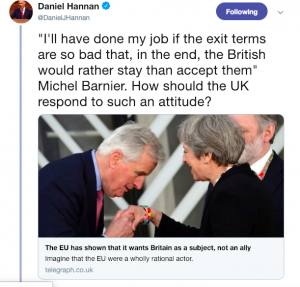 Another reason for being cautious about a second referendum is that it seems more likely that it would end up producing the same result – despite all the scare stories.  This clip from Questiontime is indicative of the mood of many in the country – Brendan O’Neill as usual sums it up well.

“I recall one law point when nine foreign ministers from the major countries of Europe solemnly assembled in Brussels to spend several hours discussing how to resolve our differences on standardising a fixed position of rearview mirrors and agricultural tractors.” James Callaghan

When Monnet died in 1979 he wondered whether his project of a European union had actually failed, believing that the American presence in Europe had mattered more than a European Community which he considered had been reduced to a customs union.

But the community was now seeking to impose uniformity through an increasing amount of legislation and laws. By the late 1970s the output of new community laws had risen to some 350 a year and, as always, the real agenda was further integration. The community also sought to attack the financial assistance given by member states to their own industries – it did this partly through legislation, but its most useful ally in this battle was the ECJ, whose chief purpose was to act as the communities Supreme Court in reinforcing supranationalism.

You will note the similarities with the situation today. The whole question of common regulations and the use of the ECJ is being used to promote the sovereignty of the EU and diminish the sovereignty of the national states. You can see how this is being used in the current negotiations particularly with the use of the so-called backstop in Northern Ireland as a means to control and dominate the UK.

During the early 1980s a Treaty on European Union was being planned. This would lead to the single European act and also the Treaty of Maastricht. the man responsible for the planning of this historic move was Alberto Spinelli. Spinelli had been a European commission but it was only in 1979 at the age of 72 that he became an independent MEP attached to the communist group. His whole aim was to bring about a federal Europe and to do so through reforming the Treaty of Rome.

Meanwhile the enlargement of the European Union continued – with Greece in 1981, soon to be followed by Spain and Portugal so that the nine became 12. Spinelli managed to get the following solemn declaration approved by the heads of government, including Margaret Thatcher – who does not seem to have noticed what she was signing!

The heads of state or government, on the basis of an awareness of a common destiny and the wish to affirm a European identity, confirm their commitment to progress towards an ever closer union among the peoples and Member States of the European Community.” Solemn Declaration on European Union, Stuttgart, 19th June 1983

Meanwhile on 15 June 1983, Thatcher won a landslide victory over the Labour Party led by Michael Foot, which had included in its manifesto a pledge to take Britain out of the EEC. I found the following quote from the newly elected member for Sedgefield, Tony Blair, fascinating:

“We’ll negotiate a withdrawal from the EEC, which has drained our natural resources and destroyed jobs.”

The common fisheries policy was finally begun on 25 January 1983. British fishermen got a rotten deal out of this – whilst the French were favoured. Despite having most of the fish in the waters, in cash terms the U.K.’s share of the total catch was only 13%. The French for example got an 18,000 ton cod quota for the English Channel, compared with only 1750 tons allocated to British fishermen.

The stupidity of the policy was further demonstrated by the fact that the quota system meant that when fishermen caught fish that were not part of the quarter they had to return them to the sea – dead. Billions of fish were discarded every year.

When Spain joined the EEC, it had the largest fishing fleet in Europe. In addition it had a reputation for its predatory disregard of conservation rules. Rather than integrate Spain fully into the CFP, the community decided to pay them substantial funds and also to pay huge sums on buying fishing rights for the Spanish and Portuguese fleets around the coast of Africa and across the underdeveloped world to compensate them for their exclusion from European waters. And so the destruction of the West African fishing grounds by the EEC began. 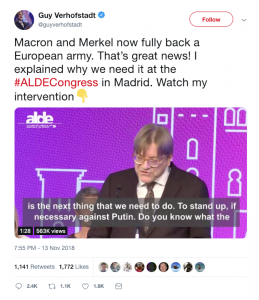 Meanwhile the French Pres Mitterrand was pursuing plans to establish a European defence identity independent of NATO, effectively continuing a French policy objective which stretched back to the time of De Gaulle. The German Chancellor Helmut Kohl was solidly behind this. Britain, as always was ploughing a different furrow. Mrs Thatcher was determined to embark on a policy of deregulation throughout the community – and to set up the Single Market. (Again note how ironic it is many of today’s liberals, socialists and nationalists regards the single market as a progressive left wing project – even though it was as she herself declared “Thatcherism in Europe”!).

The Single European Act and the Single Market

The next step in European integration took place at the summit held in Milan in 1985. 50,000 activists mobilised by the European movement paraded through the Milan streets, the banners proclaiming “down with frontiers”. The British proposal to continue with things as they were except with the adoption of the single market was defeated in favour of a new European treaty. Once again Britain was in a minority and outvoted.

It is interesting that at this Milan Council there was a report on “A People’s Europe” (note again the similarity with today – A People’s Vote – It has nothing to do with the people, and everything to do with the people falling into line with the plants of their Masters). This was primarily designed to set up a European identity – using higher education establishments and the dissemination of information on Europe’s history and culture so as to promote European awareness. There was also to be joint promotion of television and cinema projects.

This chilling declaration from the European commission indicated the approach which they wanted to take – undermining national media and creating an EU media.

A New Flag and a New Anthem

anthem. The flag was first raised in Brussels on 29 May 1986. It was also decided that there should be a European passport to replace national passports, and community vehicle number plates. It wanted European sports teams to compete in international events. It also stated that special attention should be given to educational establishments and the need “to facilitate the works of schools and teachers,” by providing them with books and teaching materials putting across “the European dimension”.

Here is a slightly different version of the EU anthem…!

In effect the Commission were looking for all the trappings of a national state, without the difficulties of actually having to be elected and democratically accountable.

Meanwhile Mrs Thatcher was so determined to get her single market that she was prepared to put up with a substantial increase in the commission’s powers by allowing qualified majority voting on a majority of subjects.

Despite her objections to many things within it Mrs Thatcher signed the Single European Act in December 1985, an Act which committed the European Economic Community to transforming relations between our nations into “a European Union”. It appears that not only Mrs Thatcher, but the British Houses of Parliament did not realise the significance of what they were passing. The Single European Act was passed by a mere hundred and 49 votes to 43.

Why is There Chaos in Parliament?