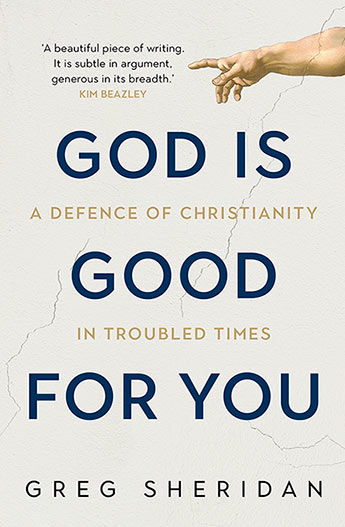 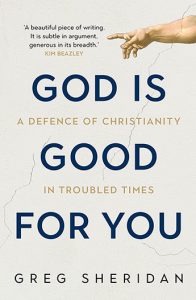 This is an unusual book, possibly unique- a best selling secular book written in defence of Christianity! Greg Sheridan is the foreign editor of the Australian and he writes with a great deal of insight, knowledge and perceptivity. This book is superbly written, fascinating and gives a real insight into the impact of Christianity upon the West and also how we as Christians are perceived by others. Sheridan is clearly well read and has an empathetic and sympathetic understanding of his subject. His book is a mine of information. The chapter on the faith of politicians is particularly enlightening as is the chapter on Signs of New Life in the church in Australia. (I found it intriguing and encouraging that he cites the work of my friend Steve MCAlpine in Perth so favourably). Although at times I found the book frustrating, because it gets so close and yet sometimes seem so far, for example at points he seems to have a view of Christianity which is a kind of moralism) overall it is one of the most insightful and interesting books that I’ve read in a long time. Much to think about and work with. Well worth reading…..it’s little wonder that it has caused quite a stir in Australia….I wonder if such a book could have been written in this country by a major journalist or would that be considered career suicide?

There are some great quotes some of which are below:

Typically, where the elites lead, the public ultimately follows, because the elites supervise education and create most of the public culture (page 7)

In Charles Murray’s seminal study of the white underclass in the US, Coming Apart, he

reports that the last thing that holds working class and impoverished communities together is the local churches. When they collapse, the communities collapse. (Page 27).

“it is more rational to believe in God than believe there is no God. Belief in God is much more rationally appealing than atheism. The resting place of the mind, its natural equilibrium, as it were, is belief.” (Page 35)

“a commonsense interpretation of the facts suggest that a super intellect has monkeyed with the physics“. ( Fred Hoyle – Page 49).

“I believe in the inerrancy of Scripture… But I cannot see that anything Scripture says, in the first chapters of Genesis or elsewhere, bears on the biological theory of evolution one way or another… Scripture was given to reveal God, not to address scientific issues in scientific terms, and… as it does not use the language of modern science, so it does not require scientific knowledge about the internal processes of God’s creation for the understanding of its essential message about God and ourselves.” (J I Packer Page 55).

“If my mental processes are determined wholly by the motions of atoms in my brain, I have no reason to suppose my beliefs are true… and hence I have no reason for supposing my brain to be composed of atoms. (JBS Haldane – page 59).

“The Christian prejudice was always in favour of the marginalised. Emperor Constantine outlawed the branding of criminals because men were made in the image of God.” (Page 115)

“When a man disdains to be the equal of his fellowmen, he becomes like an apostate angel” (Pope Gregory the great at the start of the seventh century – page 116)

“The Truth that saves must be valuable for life… Unless it sways the life and thought of the man who receives it, it is nothing.” (Alfred Deakin, 1905 – p.171).

Just get the trains to run on time and we’ll take care of the meaning of life ourselves was something like the Australian attitude.” (Page 173).

I have always been more interested in religion than politics.” (Tony Blair – page 206). 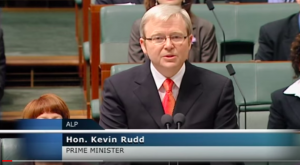 Does atheism explain the universe, life, including human life, consciousness and conscience? Hyper- rational atheism gave us Nazism and doctrinaire Soviet communism. Ultra-rationalism does not deliver you any moral compass. (Kevin Rudd- Page 216).

If we abandon God, and the ethical imperatives that proceed from that, we are in danger of ending up in an amoral morass, where the sort of technocratic debates about whether certain human beings should be regarded as sharing a common humanity, like the Soviet purges of “enemies of the people” or the Nazi’s belief in the expendability of certain races, most particularly Jews, become possible. You then land in an amoral jungle, animated only by some mud- begotten social Darwinianism. This is because there was no longer a guiding moral authority. These regimes could “reason” their way to any conclusion.” (Kevin Rudd – page 217).

The only truly acceptable contemporary Christianity for Western political culture now seems to be a Christianity which doesn’t mention God and which subscribes to conventional elite wisdom on policy issues (page 226).

The rule of law came out of a Christian mindset and defined the West. The enemies of the West still define the West that way. Human rights have degenerated into identity politics. We are living now in a post-Christian society but still living on the legacy of Christianity and that legacy is running down. This could end in chaos. For society to work you’ve got to have agreement about basic rules. You want your rights but you have your responsibilities too. If we don’t have consensus on the basic rules are we will find it hard to live in a society with each other… That is a matter of great concern to me. I’m very concerned about where this experiment of being a post-Christian society will end. It’s an experiment. We haven’t been there before. (Peter Costello – page 229).

They are an intriguing pair partly because they are trying to confront the decline of Christianity and the rise of militant secularism directly in their pastoral, church planting work. There are a version of what I think maybe the best combination on offer – theological conservatives and operational pragmatists with strong situational awareness, as the military might say. (Speaking of Shiner and Steve McAlpine – page 278).

We are combining conservative theology with radical ecclesiology. We are looking for porous ways of bringing people in at the boundaries. (Steve McAlpine – page 281).

What struck me about Rod was that he was on fire with a passionate belief in Christianity. This belief was friendly but it was also unselfconscious, unapologetic. There was no defensive clearing of the throat before introducing the outre subject of religiously. (Page 296 – speaking of Rod McArdle – Brethren turned Anglican vicar).

Christianity doesn’t seek conflict for its own sake, but if it’s to be effective it must know that conflict is the inevitable consequence of proclaiming its message. It is also important to have always in mind that Jesus’s two greatest commands, which he reiterates again and again, are to love God and to love your neighbour. This does not, however rule out ethical conflict. (Page 319).

There is no strategy which guarantees success, but I think realism and analysis is always the right starting point, and the Christian churches would do much better to explicitly recognise their minority status and seek to use it constructively. (Page 323).

Christians in a secular culture must always practice a mixture of withdrawal and engagement. Merely going to church for an hour a week involves some amount of withdrawal. There must be enough withdrawal to sustain the spirit, to provide safe spaces for the faith to relax and renew, to seek fellowship with other Christians, to provide space to think the culture through. Yet at the same time there must be wholehearted engagement with all the marvellous people around, many of whom will not be Christians. There must be engagement in the great conversation about what constitutes a good life, about civic purpose, about the shape we want our civilisation to take. (Page 335).

And take the time to listen to this superb conversation between Greg and John Anderson:

Here is the interview I did with John Anderson on the same subject.

John Anderson Interview – Where is the West Heading?