Somme – Into the Breach- Hugh Sebag-Montefiore 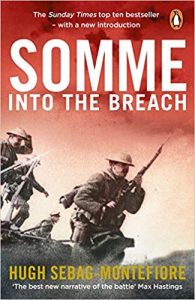 This is a detailed and harrowing book which took me some time to get into. At times it was unrelenting. But it was worth it. There was a great deal of helpful information which I was not aware of – for example the fact that there were what was known as Pals battalions, where recruits usually had a link with a particular profession or area – this resulted sometimes in whole communities being far more affected than others.

Or that there were 100,000 Australian and New Zealand men who fought under British command in France. I loved this information – The British officers were greatly concerned with a regard for dress – unlike the Australians. “The Australian refusal to dress up sprung from the fact that the whole tendency is against being neat… Public opinion is against great care being devoted to a man’s personal appearance, as being unessential and is all in favour of whatever is essential.” (Charles Bean, Australian journalist embedded with his forces – page 390). But not so much this – 18% of Australasian soldiers who visited the City of London were infected with venereal diseases, mainly contracted through prostitutes in Egypt. (Page 445)

Another interesting piece of information was that Anti-Semitism was deeply ingrained in the German army.

There are many lessons to be learned from this.

“The battalion , like many others, had to fear its own officers almost as much as the Germans” (page.22)

Divisional diaries may say that a certain very limited success was achieved, but from one who was in the middle of it… It may be glorious that many men died bravely in a vain endeavour, but many would have lived to accomplish great deeds but for the ignorance… Ill training and lack of thought of our general officers. (Captain Page – Page 117)

“I honestly believe Goldy, and many other officers, were murdered on that night… By the incompetence, callousness and personal vanity of those high in authority… I’m so bitter, and the facts are so palpable, that it must be said.” (Alec Raws who until then had been very patriotic- writing to his older brother. Page 360).

It seems that causing hundreds of casualties inadvertently was a less heinous crime than rocking the boat. (Page 401)

“There were many other similar speeches. Most reiterated the message: we have destroyed the Germans with our guns. Now all you have to do is to walk over to the trenches. There will be no opposition.” (Page 55)

One reason why the Australian commanders were so slow to react to the worsening situation was their unshakeable optimism. Never have the descriptive words “they were in denial” been more apt. Although there had been no definite news about the 15th Brigade’s 60th Battalion after its initial advance towards the area to the east of the Sugar Loaf, a belief had been fostered that no news, apart from optimistic statements by wounded soldiers from an unspecified battalion, meant good news. (Page 298).

“in the fullness of our conceit and the depth of our ignorance, we congratulated ourselves on the wonderful success we have made of our attack, and we were not alone in saying that the magnitude of the victory was out of all proportion to the number of casualties. We were young and had much to learn.” (Lance Corporal Douglas Horton – page 331).

“General Birch (as artillery adviser)… Reported that the Australians had at the last moment said they would attack without artillery support and they did not believe that machine-gun fire to do them much harm! Birch at once saw General Gough, commander of the reserve army, and arrangedat the original artillery programme should be carried out. The Australians were splendid fellows, but very ignorant! ” (Earl Haig – Page 347).

“The CO had us parade in the afternoon (on 30th June) when he gave us a short serious address, the main thing he impressed on us being: “kill all you can and don’t take any prisoners” (private Sydney Fuller the eighth Suffolk Regiment. Page 201).

“We don’t want prisoners. We have to feed prisoners. What we have to do is kill Huns. The only good Hun is a dead Hun a.” (A Scottish major speaking to the New Zealanders – page 447).

“They had already dropped the rifles and offered no resistance. I wanted to use the bayonet, but could not bring myself to do it. So I fired a couple of rounds at two yards range into the two nearest to me. This was nothing else but murder. I don’t know what made me do it, as they could easily have been taken prisoner. I shall never forget the looks on their faces as I pointed my rifle at them. Such sickly grins which showed fear. They shrank back before they were shot. We cleared that trench sending some of the Germans back as prisoners.” Wilkinson – Page 470).

“We were given strict instructions to take no prisoners, until our objective had been gained… Two Canadians stood over the trench, one on the parapet, and the other on the parados,… And they exterminated the Germans as they came out of their dugouts. One young German, scruffy, bare headed, cropped hair and wearing steel rimmed spectacles, ran around screaming with fear, dodging in and out among us, in a bid to avoid being shot, crying out “Nein! Nein a! He pulled out from his breast pocket a handful of photographs, and started to show them to us – I suppose they were of his wife and children – in an effort to gain sympathy. It was all of no avail. As the bullets smacked into hima f he fell to the ground motionless, the pathetic little photographs fluttering down to the earth around him.” (Catterole – Page 472).

“I’m going to tell you this much. You know what you have got to do. The more prisoners you take, the less food you get, because we have to feed them with your rations.” (Major General Cameron Shute – Page 506). 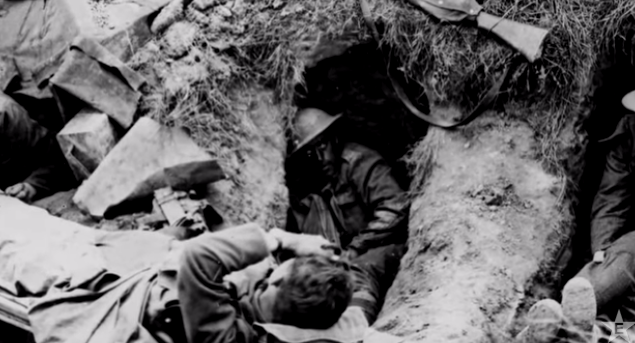 During the lead up to the attack, a box of grenades was dropped onto the ground in one of the assembly trenches in Thiepval Wood. In the process, the pins from two grenades somehow became dislodged. The resulting explosions might have blown up everyone in the vicinity had it not been for the quick reaction of a 20 year old bomber called Billy McFadzean. Rather than seeking to save his own skin by attempting to run away, he flung himself in the opposite direction, landing on top of the grenades just before they exploded, thereby sacrificing his own life to save his comrades. It was an almost unbelievably brave act, which deservedly earned McFadzean a posthumous Victoria Cross, the 1st to be won a during the Battle of the Somme. (Page 140).

“Not one of these Huns, some of whom had been engaged in slaughtering our men up to the very last moment, was killed… When you remember that our men were worked up to a frenzy of excitement, this crowning act of mercy to their foes is surely to their eternal credit. In fact kindness and compassion for the wounded is about the one decent thing I have seen in war (Lt Young speaking about the Irish treating their prisoners – Page 442) .

“Pozieres remains sacred to the memory of the Australian lads who gave their all for liberty. He has never lived who has not felt at some time but his life belonged to humanity. And surely those who not only fell but gave their lives for humanity… lived in the fullest sense. They lie there enshrouded by the soil they saved and forever then live in our memory… as men whose praises shall go resounding down the ages while yet men love and revere liberty, and honour bravery.” (Douglas Horton, Australian Lance Corporal – Page 518).

“to sit inactive under intensive shellfire for hours is one of the worst features of modern warfare… The site of your comrades… being killed and wounded puts a strain upon you that calls for the highest degree of self-control. The temptation to bolt becomes very strong and has to be resisted in every possible way. Any action is better than the dreadful suspense of waiting your turn to be slaughtered or hideously maimed. But no action is possible, and you just sit on hoping against hope that your name is not inscribed on any shell and with a horrible dread that it is.” (Lt Auld – page 425).

“I think it is Divine help which gives me tranquillity of mind, and enables me to carry on without feeling the strain of responsibility to be too excessive. I try to do no more than do my best and trust God.” (Earl Haig to his wife Doris on the eve of the Battle of the Somme – page 27.)

Cotton came into breakfast with us. He brought the little Bible which Burchill had taken from the body of the dead German on the night of his patrol exploit… It was a kind of children’s testament filled with gaudy prints… On the flyleaf was the name Hermann Stampa… And over this in a child’s handwriting the word “Dada”. War is very sad… I suppose he had a wife and kiddies somewhere, filled with pride for the daddy who was a soldier, and now stricken with grief for the daddy who is missing.” (Capt Charlie may – page 41)

The Allied troops as well as the Germans were often completely ruthless. But there is one example given of a lieutenant Walter Waterhouse, a devout Christian, who prevented his men slaughtering a number of Germans they had captured. (Page 335).

This is a book that really stretches your emotions as well as your mind. There is anger at the futility of the battle, despair at the brutal inhumanity of humanity, and astonishment at the bravery of some of the soldiers.  And a deep cry within that says ‘Please Lord, never again….How long O Lord? How long?”.

the desolations he has brought on the earth.

to the ends of the earth.

He breaks the bow and shatters the spear;

he burns the shields with fire.

I will be exalted among the nations,

I will be exalted in the earth.”

the God of Jacob is our fortress.

We Shall Remember Them – November Record Editorial