Letter from Australia 113 –  A Car Miracle

I can hardly believe that it has been so long since my last letter!  So much has happened and yet it seems like just yesterday!  My theory that life would slow down as we got older seems to not be working!   I wonder if you believe in miracles – in the reality of divine intervention?  Please note that I am not claiming that every act is a miracle – even less that being a Christian means that you are prevented from suffering harm.  We may actually suffer more – but the Christian knows that our times are in the hands of the good God.  I also know that there have been at least three times in my life where I believe that there has been miraculous intervention.  I am also aware that there is some aspect of spiritual warfare involved in all of these.  Each of these events occurred in the midst of considerable spiritual turmoil and attack.

22 years ago, we almost lost our two children, Andrew and Becky.  We believe that they experienced a miraculous intervention – You can read about it here. https://theweeflea.com/2014/02/28/miracle-at-twin-lakes/

11 years ago, I experienced my own miracle (at least that is what my surgeon called it! And I agree) https://theweeflea.com/2015/01/01/the-shelter-of-the-most-high-new-year-old-hope-a-personal-testimony/

Then this past week it was Annabel’s turn.  I’ll tell you about it below, but again I have to say that the Lord’s angels were watching over her!  And me!  You may not agree and might prefer to call it ‘extreme divine providence’

So, what happened last Friday?    Annabel was driving back from shopping when she was hit by a cement truck, who just veered into her passenger side.  She was badly shaken, but not hurt – although I would not underplay the trauma of being in an accident like this.  Our car is probably a right off as I doubt it would be worth the value of the car to repair it.   One of the things to be thankful for is our old 2005 BMW.  We really don’t like it – but it probably saved her life…it is so rock solid.  Events like this remind us of the fragility of life.

I was reading in Thomas Manton that for every reason we have to complain, we have a thousand to be thankful.  That does not mean that there are no problems or frustrations.  Indeed, as I write this – five days after the event there continues to be a bizzare drama with the car.   Nothing is straightforward. 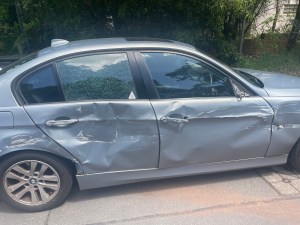 The police refused to attend the incident because astonishingly in NSW, they do not attend road traffic accidents unless the road is blocked, an ambulance is called, or a drink driver is involved (when I pointed out to the policeman on the phone that it was difficult to establish that if they didn’t attend – he was not impressed with my logic!).  There was a lovely local constable who has been really helpful – however his boss was somewhat less so.  The boss informed me that the police did not deal with road traffic accidents and that I should pass it on to my insurance company.  My insurance company told me that the police did not know what they were talking about, and the police told me that the insurance company did not know what they were talking about.   And so, the never-ending circle of the powerless continues.

As a result, we have had extreme difficulty in getting the insurance details of the lorry driver’s company and, according to the police, 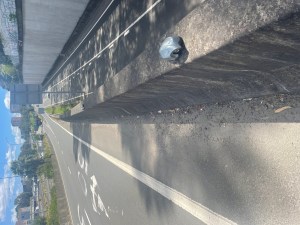 it is not essential for the company to provide them, or for the police to obtain them.  The company could have refused to give them to us – and apart from an expensive civil suit, there was apparently nothing we could do!      Apparently, when a cement truck crashes into your wife’s car and almost kills her, this is no one’s business and no one’s responsibility.  I tend to suspect that if there are ‘crimes’ which are more politically ‘aware’ (i.e., if I misgendered someone!) there might be a different reaction!    This is what happens when justice is turned into a lottery!

I am thankful to have made some progress today with the insurance company. Pray on.    Meanwhile we are carless – which is not too great a hardship in Sydney – although somewhat inconvenient.  But I don’t really care about the car…I’m just thankful for Annabel being protected….a car is nothing in comparison. This event and some personal health issues have certainly caused us to reflect both on the fragility of life and the sovereignty and mercy of God.  I posted this short video a few weeks ago on my Instagram and cannot believe how many people have watched and liked it!  Why?  To me it is a reminder of how fragile and delicately balanced nature is.

But he has the whole world in his hand.  I have been reflecting a lot on Isaiah 40 – which contrasts the temporary nature and fragility of this world.  The people are as grass – and all their faithfulness like the flowers of the field.  The grass withers, and the flowers fall – but the word of the Lord endures forever.   It’s even sturdier than a BMW!

There was a lot more I wanted to write about – but perhaps I will leave that for a week or so.  We are heading for a bit of rest and recuperation up in Cairns.  See you in a week – God willing (how I mean that phrase!) …

A key part of my work at the moment is developing the ASK website. https://ask.org.au/

Please have a look at it – become a member if you want – and let us know what you think.    Please remember that this is just a beginning…. much more to follow.  We are adding to it almost every day….