How should we react to the war in Ukraine? Sadly, social media does not really help us, nor does the 24/7 news cycle. We tend to divide the world into the good guys versus the bad guys, but war is usually not that simple.

So how do we avoid becoming those armchair warriors, pub bores and internet experts who populate Twitter and Facebook? Those of us who don’t have the time to read and reflect on the many excellent analytical in-depth articles by more serious journalists and historians could do worse than learn from the wisdom of someone who experienced war at its worst – JRR Tolkien.

This week Tolkien was left off the list of 70 Commonwealth books to mark the Queen’s Platinum Jubilee, despite Lord of the Rings being one of the most influential and widely read books of all time. Perhaps he was too Catholic for the BBC – just as JK Rowling, who was also left out, was too feminist? 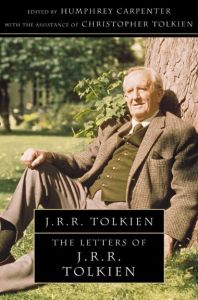 I have been reading The Letters of J.R.R. Tolkien and came across a beautiful set of letters written to his son, Christopher, towards the end of World War II. They give us helpful insights into similar issues in today’s world.

His comments on radio could be just as easily applied to social media today. He argues we would be better off if it had not been invented! “I daresay it had some potential for good, but it has in fact in the main become a weapon for the fool, the savage and the villain, to afflict the minority with, and to destroy thought. Listening in has killed listening.” (p 72)

“The utter stupid waste of war, not only material but moral and spiritual, it is so staggering to those who have to endure it. And always was (despite the poets), and always will be (despite the propagandists) – not of course that it has not, is and will be necessary to face in an evil world.” (p 75)

“I sometimes feel appalled at the sum total of human misery all over the world at the present moment; the millions parted, fretting, wasting in unprofitable days – quite apart from torture, pain, death, bereavement, injustice….all we do know, and that to a large extent by direct experience, is that evil labours with vast powers and perpetual success – in vain: preparing always only the soil for unexpected good to sprout in.” (p 76)

In this regard, Tolkien warmly tells his son of how he was such a gift to them at a difficult time.

Tolkien on the Press and Prejudice

“It is depressing to see the press grovelling in the gutter as low as Goebbels in his prime …. we know Hitler was a vulgar and ignorant little cad, in addition to any other defects (or the source of them) but there seem to be many vulgar and ignorant cads who don’t speak German, and who given the chance would show most of the other Hitlerian characteristics.” (p.93)

As Christians we need to be careful of how we speak of those we perceive as enemies. They too are made in God’s image.

Tolkien on the Spiritual Battle

“You can’t fight the Enemy with his own Ring without turning into an Enemy; but unfortunately, Gandalf’s wisdom seems long ago to have passed with him into the True West.” (p 94)

There is a deep sorrow, empathy and pathos in Tolkien’s letters to his son. If we were aware of the true extent of evil in the world, we surely could not stand. But Tolkien was a Christian who believed in the coming day of judgement and a time when God would put all things to rights.

In a famous passage at the end of The Return of the King, he writes: “‘Gandalf! I thought you were dead! But then I thought I was dead myself. Is everything sad going to come untrue? What’s happened to the world?

“‘A great Shadow has departed,’ said Gandalf, and then he laughed, and the sound was like music, or like water in a parched land; and as he listened the thought came to Sam that he had not heard laughter, the pure sound of merriment, for days upon days without count.”

There is something wonderful and profound about believing, not that all things are good, but that good will come from all things – even out of the broken, lost and evil world we inhabit.

It reminds us of Augustine’s great summary of the power of God in the face of evil:

“And, in the universe, even that which is called evil, when it is regulated and put in its own place, only enhances our admiration of the good; for we enjoy and value the good more when we compare it with the evil. For the Almighty God, who, as even the heathen acknowledge, has supreme power over all things, being Himself supremely good, would never permit the existence of anything evil among His works, if he were not so omnipotent and good that he can bring good even out of evil” (Augustine – Enchiridion chapter 11).

On that thought, Romans 8:28 seems a fitting place to end: “And we know that in all things, God works for the good of those who love him, who have been called according to his purpose.”

Is it finished? Lessons from the Finnish prosecution of a Christian MP – CT