This weeks AP column is a sort of review of Andy Bannisters excellent new book Do Muslims and Christians Worship the Same God.

Do Muslims and Christians Worship the Same God?

The woman in the hijab was surprised.  She approached me after a Muslim/Christian debate and asked if she could talk to me.  I jokingly asked if her husband was present and would she be allowed to. ‘Yes, he’s over there, but he’s not that smart’ was the somewhat stereotype-breaking reply!   ‘Do you really believe that there is one God,  that He is the Creator of heaven and earth, that the Bible is the Word of God, that there is a heaven and hell?”   “Yes – of course”.  “You are the most unusual Christian I have ever met – you are almost a Muslim!”.   She had been to many such debates and her impression from the Christians who were present is that they were so wet, confused and unsure of their faith, that she wondered whether they believed in God at all.

Another time I was in a similar debate when I was angrily attacked by a ‘Christian’ from the audience, who said I was a disgrace to Christianity for not accepting that Christianity and Islam were in essence the same.  Before I could respond, my Islamic opponent stood up and said to my accuser;  “Sir, I know what David believes; I know what I believe.  We agree to disagree.  But I haven’t a clue what you believe.  We are not the same.” 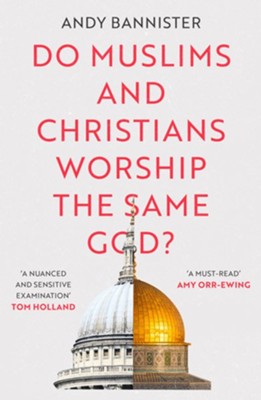 It’s a commonplace in society and amongst more ‘liberal’ Christians that Muslims and Christians worship the same God.   Andy Bannister in his new book Do Muslims and Christians Worship the Same God? gives a couple of examples of this thinking.  The journalist Giles Fraser, who is also an Anglican vicar, states: ‘Christians should remind themselves that Muslims are our brothers and sisters with whom we share a faith in the living God.”   President Joe Biden argued during his election campaign: ‘I wish we taught more in our schools about the Islamic faith . . . [What people] don’t realize is that we all come from the same root here in terms of our fundamental, basic beliefs’.

I share President Biden’s desire that we should learn more about the Islamic faith. The less you know about Islam, the easier it is to assume that we worship the same God.  Which is why I would highly commend Dr Andy Bannister’s book.  It’s written with his usual clear style and dry wit, but is a mine of information. It presents a consistent and biblical argument, which clearly demonstrates that we do not worship the same God.

I suspect that Joe Biden was not thinking about educating people to think for themselves and to examine the primary sources (i.e., the Koran, hadith and the Bible), but rather to accept a sanitised ‘made for/by the progressive West’ version of Islam and indeed a sanitisied made for/by the progressive West’ version of Christianity.  But as Christians we have a different methodology.  We don’t start with what we would like to be true, and then make things fit into that.  We look for what is true – irrespective of what we feel or want.

Andy summarises the key question well. “In a similar way, it is perfectly possible for Muslims and Christians to agree entirely that God exists – even to agree on some of God’s functions (creating, ruling, judging). But that’s not enough; rather, we must ask about the identity of the god that Muslims and Christians believe in and see how well the descriptions line up.”

There are many differences in the kind of God that we believe in.  But by far the biggest is the contrast between the Islamic doctrine of Tahweed and the Christian teaching of the Trinity.   Islam teaches not only that there is but one God but that this God is oneness.   They regard the Christian idea of distinctions within God – the Father, the Son and the Holy Spirit – as blasphemous.  It is the very heart of the Christian faith to follow Jesus Christ as Lord (God).  It is the very heart of the Islamic faith to deny that.   How then can it be logically or coherently argued that we worship the same God?

Andy Bannister was on a recent version of the Unbelievable podcast where he had a fascinating debate with Archbishop Josiah Idowu-Fearon from Nigeria on this question.  It is revealing to see how the Archbishop argues his unbiblical case. There were so many contradictions.

The Archbishop states that “It’s not my job to judge”, but then goes on to say that we are to judge people by their fruits – not facts or doctrines.  He disparages education, but then it becomes apparent that his education at the University of Durham is what drives his confused theology.  He says we are to be ‘witnesses’, but witnesses to which God?  The Triune God who sent his Son, or the Islamic God who condemns all those who say that he has a son?   The Archbishop accuses Andy: “You are judging me from your Christian understanding”.  To which the obvious reply is “Yes, of course.  What else would you expect a Christian to do?  You are a Christian Archbishop – are you not supposed to proclaim the Word of God and judge, i.e., take your doctrines and standards from that?”.

The Archbishop tells us that Christians and Muslims in Nigeria have a mutual position of respect.  Yet in the past 5 years more than 11,500 Christians have been killed by Islamist militants, four million displaced and 2,000 churches burnt?  It’s a strange concept of ‘respect’!

One time I was asked to take part in a debate in a local mosque with an Imam, a pagan and a Bahai (sadly this reflects somewhat accurately the Islamic view of the state of religion in Scotland).  After the debate a number of young Islamic men approached. “David…you believe in one God.  You are not a pagan.  You destroyed the pagan and the Bahai.  If it were not for Jesus, you would be a Muslim”.  To which my response was “Thank Allah for Jesus!”.   At which point the senior Imam, hurried his young men away – lest they be corrupted by this ‘idolater’.

Christians do not, and should not, hate Muslims.  Our desire is to love our Islamic neighbours and friends.  Which is why we want to share the greatest gift we have to offer – the Lord Jesus Christ.  Islam offers no forgiveness, no assurance and no God of love.  Christ does.  And we should offer Christ. 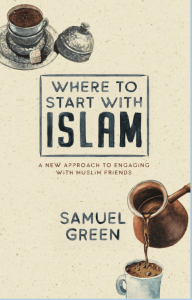 In addition to Andy Bannister’s new book I would highly recommend a book by the Australian writer and evangelist, Samuel Green.  Where to Start with Islam – a new Approach to Engaging with Muslim Friendsis the best and most helpful I have ever read on this subject.

We want to engage in respectful and loving dialogue with our Islamic friends.  But to do so does not mean that we confuse, change or distort the truth of Christ.  It does mean that we listen, understand and present Christ.  In many parts of the world, Muslims are turning to Christ.  Some regard the presence of so many Muslims (around 700,000) in Australia as a threat.   The Church should regard it as an opportunity to show the love of Christ to Muslims and to introduce them to the God they worship as unknowable.

Martyn Iles and the Opportunity of the Tweets of Prejudice -AP